Flights in the Pacific Fingered as a Big Climate Culprit

A new study may make you think twice before jetting off to Australia or New Zealand this fall. Research by a team from MIT’s aeronautics department found that out of 83,000 worldwide flight routes studied, flights to and from Australia and New Zealand during the month of October create the highest amount of a powerful global warming pollutant, known as tropospheric ozone.

The new findings come at a time when the aviation industry, which has the fastest-growing emissions within the transportation sector, faces the challenge of trying to slow its global warming footprint. The European Commission has projected that by 2020, despite gains in fuel efficiency, global international aviation emissions may be around 70 percent higher than in 2005, and they could grow by 300 to 700 percent by 2050. 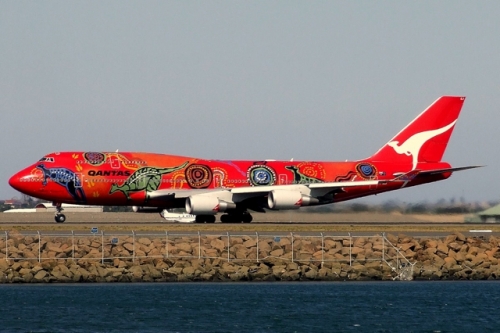 Every day there are more than 90,000 commercial flights worldwide. During the course of a year the aviation sector contributes about 2 percent of global annual emissions of carbon dioxide — the most important long-lived global warming pollutant — but the total warming impact of the aviation sector is much larger than that, due to other emissions that result from burning jet fuel at high altitudes.

The study found that the most sensitive area to aviation emissions lies near the Solomon Islands in the Pacific, where the researchers estimated that just 1 kilogram of aircraft emissions in the form of nitrogen oxides — such as nitric oxide and nitrogen dioxide — can result in the formation of an extra 15 kilograms of tropospheric ozone being produced in one year. A flight from Sydney to Mumbai, the biggest ozone offender of any flight studied, would produce 25,300 kilograms of ozone. Air India flies that route daily with a new Boeing 787 “Dreamliner,” via stops in Melbourne and New Delhi, while Qantas flies it via Singapore and its Star Alliance partners.

The International Civil Aviation Organization (ICAO) plans to hold a meeting beginning on September 24th in Montreal to consider a proposal for enforceable greenhouse gas emissions reduction measures. The European Union has put in place a regional emissions reduction plan that would charge flights originating or ending in Europe a fee for their emissions. The E.U. put the enforcement of its plan on hold pending the ICAO meeting, but if the ICAO meeting fails to yield an agreement, there is the prospect of a trade dispute between the U.S. and Europe over the fees. The U.S. enacted a law in November that would protect U.S. carriers from those fees.

The new study underscores the need for the meeting in Montreal. “It’s the non-CO2 effects with aviation that are really very significant,” said Steven Barrett, a professor at MIT, and the lead author of the study.

Because the atmosphere above the southwestern Pacific is relatively pristine, with little preexisting amounts of nitrogen oxides, it has a higher sensitivity to aircraft emissions. The Pacific is about five times more sensitive to aviation emissions compared to Europe, and 3.7 times that of the U.S., the study found. It also reported that the atmosphere’s sensitivity to aircraft emissions over Southeast Asia, where the aviation sector has dramatically expanded in recent years, are more than double those in North America and Europe.

Barrett said he expected to find that flights have varying impacts depending on their geography and season, but he was surprised by the magnitude of the difference in the climate impacts between flights in parts of the Pacific vs. other regions.

The amount of ozone that jetliners produce when they fly at their typical cruising altitudes of between 30,000 and 40,000 feet varies by season, as well as location. Sunlight is needed in order for nitrogen oxides to help create tropospheric ozone, but the long days and bright sunshine during the summer leads to quick ozone formation and rapid destruction, Barrett said in an interview.

“The most impactful emissions are produced between the fall and the summer,” he said, when there is more of a balance between ozone formation and destruction rates.

The study shows that cutting nitrogen oxide emissions in this area of the Pacific, particularly during the month of October, would be more beneficial than reducing emissions in North America or Europe at the same time of year.

Barrett said travelers should not cancel their plans as a result of this study, but that, “It’s useful to just be aware that flights to Asia and the Pacific have a greater climate warming effect than you might expect.“

Depending on the results of subsequent studies, he said, airlines could achieve “significant reductions” in their climate impact by re-routing planes around the areas with the highest sensitivity to ozone formation.