Scientists have long expressed concern about how a lack of data and access to drilling sites prevents a complete scientific assessment of how hydraulic fracturing and oil and gas production affect the climate, environment and public health.

A new University of Texas-Austin analysis of natural gas drilling and fracking in urban areas near Dallas and Fort Worth, Texas, not only criticizes state and federal regulatory agencies for dismissing public concern about the health and environmental impacts of shale oil and gas development, but illuminates the large gap in understanding about what shale oil and gas production mean for public health and the environment in Texas and beyond. 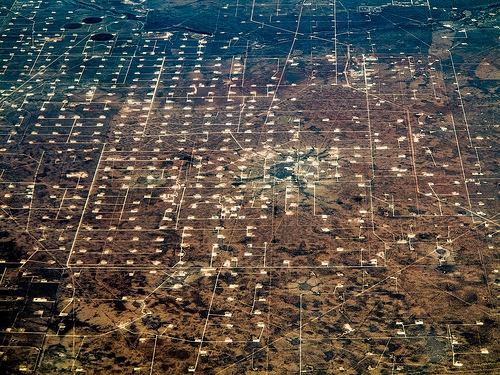 Shale oil and gas production, which is expanding rapidly across much of the central U.S., is likely to be a driver of climate change, not only because burning petroleum products produced there emits vast amounts of carbon dioxide, but because natural gas production and distribution systems are likely to leak methane, a gas about 35 times more potent than carbon as a greenhouse gas.

But the gap in scientists' understanding of what shale oil and gas development means for the environment and human health is significant, said Susan Brantley, a Pennsylvania State University biogeochemist studying the impacts of shale gas development in Pennsylvania. Brantley, unaffiliated with the UT-Austin study, is among the scientists who have spoken out about the fracking data gap.

“A few health studies have been initiated, but data are few and far between that allow scientists to interpret potential impacts,” Brantley said via email. “In addition, the lack of federal oversight on a lot of activity which is controlled by the states makes for difficulties for scientists to evaluate or even get hold of needed data. In Pennsylvania, it is even difficult to determine exactly where spills have occurred, let alone the volume of the spill, the timing or the chemicals that were spilled.”

The Fort Worth area is one of the places where energy companies have been feverishly drilling and fracking for natural gas in the Barnett shale over the past few years, often in densely urban areas. The Barnett shale in north Texas produces more than 5 billion cubic feet of natural gas per day. By comparison, the shale gas fields of Pennsylvania and West Virginia produce more than 5 times that amount daily.

Emissions and other byproducts of hydrocarbon combustion at Fort Worth-area drilling sites are suspected to affect not only the climate but also the health of those living near oil and gas production sites, according to the UT-Austin analysis, published in the Virginia Environmental Law Journal and conducted by UT-Austin community and regional planning lecturer Rachael Rawlins and former University of Montana professor Maria Morandi.

Rawlins and Morandi re-analyzed a state of Texas analysis of cancer-causing benzene and other emissions around Flower Mound, a city seeing shale gas development near Fort Worth. The state concluded that it couldn’t confirm with 99 percent certainty that childhood leukemia rates were higher in the area, and though it did find with at least 99 percent certainty that breast cancer rates were higher in the area, the state dismissed any association with toxic emissions related to energy development.

The UT-Austin re-analysis found that there is 95 percent certainty that childhood leukemia rates are higher in Flower Mound, and that there is only a 1 in 20 chance that the possible elevated cancer rate there is a random occurrence.

Rawlins said both Texas state and federal regulators have done too little to study how people are really being affected by cumulative toxic air emissions in urban areas and if natural gas production is contributing to a possible cancer cluster in the city of Flower Mound, near Fort Worth. 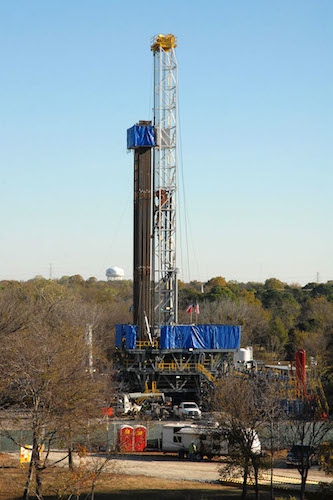 A natural gas well drilling rig operates on the University of Texas at Arlington campus near Dallas and Fort Worth in 2010.
Credit: UT-Arlington

“Claims of adverse health effects have been dismissed as anecdotal evidence,” Rawlins said via email. “On the industry side of the debate, we hear that there is no solid evidence that there are problems with fracking. Well, that’s a good point only to the extent that studies have been done — only to the extent that we are confident that we know what are safe levels of toxins and that we have identified chemicals of concern.”

Brantley said Rawlins' analysis highlights the need for more data and monitoring of emissions in areas of shale oil and gas development.

“Data are currently difficult to find and to compare and no one has assessed how problematic atmospheric emissions in these areas may be,” Brantley said. “This is similar to water quality issues — it is difficult to find good datasets that allow an assessment of water quality impacts in regions of shale gas development. The proliferation of shale gas wells in the last decade in Texas and Pennsylvania and other states has outstripped our ability to monitor and assess potential environmental impacts.”

If the environmental impact of shale oil and gas is small, no data prove it to be true, she said.

“Likewise, if the impacts are large, we don't have the datasets to document the effect,” Brantley said.

Pallavi Phartiyal, senior analyst and program manager at the Union of Concerned Scientsts' Center for Science and Democracy, said there is an urgent need for baseline and ongoing monitoring of water, air and soil quality to allow scientists to evaluate the health effects of shale oil and gas development. Companies should be required to fully disclose the chemicals used in fracking operations, she said.

“We need to ensure that public interests trump political and economic interests as we make decisions on fracking,” Phartiyal said. “And Rawlins' paper makes for a strong case for why local regulatory repsonses are needed to fill the gaps left by the federal and state level measures.”

In her analysis, Rawlins calls for Texas to provide sufficient funding and authority for state regulators to track the public health effects of toxic air emissions and to consider potential air quality problems when making local planning and zoning decisions.