Fracked natural gas wells leak much less methane — a potent climate change-driving greenhouse gas — at certain points during the production process than previous studies and the Environmental Protection Agency have estimated, according to a University of Texas study released Monday.

Methane is one of the chief components of natural gas locked up in underground shale formations — the target of a natural gas drilling boom stretching from Pennsylvania to the Rockies and beyond. Energy companies tap the formations using a method called hydraulic fracturing, or “fracking,” a well completion process that requires large volumes of water, sand and chemicals to be injected into the shale at high pressure, cracking the rock and allowing the trapped gas to flow into the well and to the surface. 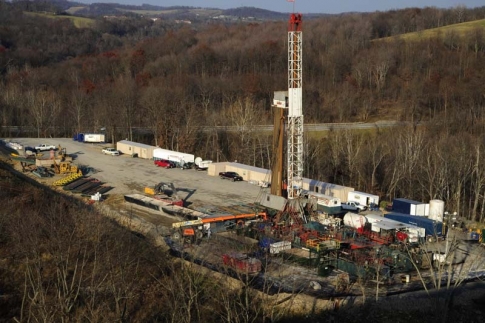 The natural gas wells and the fracking process are hardly leak-free, however. The EPA estimated in 2011 that natural gas drilling accounts for at least about 1,200 gigagrams — about 2.6 billion pounds — of methane emissions each year from well completions, equipment leaks and pneumatic controllers. The EPA estimated that “flowback,” one of the final stages in the well completion process during which fracking fluids and other materials flow out of the well, emits an average of 81 megagrams of methane per operation.

The study, led by University of Texas chemical engineering professor David T. Allen and sponsored by the Environmental Defense Fund and nine oil and gas companies, found that methane emissions from the natural gas production sites were overall about the same as EPA estimates with some notable exceptions. But if emissions control technology is used, emissions can be drastically reduced during some parts of the gas production process. The study was published Monday in the Proceedings of the National Academy of Sciences.

The study found that emissions control equipment companies installed at the natural gas production sites they selected reduced emissions during the well completion process by 97 percent. The team found that emissions from fracking flowback operations alone ranged from between 0.01 megagrams to 17 megagrams, averaging only 1.7 megagrams per flowback operation at the sites included in the study — much less than the average 81 megagrams the EPA had estimated.

“The overall goal was to measure methane emissions during production at a large number of recently developed sites, and to assess the national implications for methane emissions,” Allen said in a statement. “The team performed the first-ever direct measurements of methane emissions from some of these sources.”

Allen, who could not be reached for comment, and his team studied methane emissions at 190 natural gas well production sites nationwide in 2012, including 490 wells and 27 fracking flowback operations. The sites were provided by the oil and gas companies involved in the study, many of which had equipment installed that either captured or combusted methane emissions.

Allen’s team found that emissions from other equipment used for natural gas production, including some kinds of pneumatic devices that are designed to release small quantities of methane normally, are 70 percent higher than EPA national estimates, however.

Cornell University civil and environmental engineering professor Anthony Ingraffea, who co-authored a 2011 study showing that the climate footprint of the methane emissions from natural gas production is higher than previously estimated, said Allen’s study shows that methane emissions can be contained if energy companies choose to install the right equipment.

A statement provided by the University of Texas says the sites in the study were offered by companies volunteering to cooperate with Allen’s team, which chose among natural gas production sites the companies made available to them. The team gave the companies advance notice of the approximate times they’d be testing the production sites, according to the statement.

“You can’t ask industry which sites to go to,” Ingraffea said. “They're a conflict of interest. They’re going to take you to the well sites with the best available technology.”

Allen’s team also sampled too few fracking sites for the study to be statistically representative of natural gas production methane emissions — only 27 of the more than 25,000 fracking operations that occurred in 2012, Ingraffea said.

“You have to have a lot of samples,” he said. “They have to be sampled randomly and independently.”

Allen’s team said in the study that it shows that the use of methane emissions control technology at natural gas production sites is resulting in reduced methane emissions, particularly during flowback.

“This is a big deal,” Ingraffea said. “People have been waiting for this paper for a long time, and unfortunately, it’s a disappointment.”

Editor's Note: This story has been updated to reflect that the unit of measurement for methane emissions used in the study — Mg — is megagrams, not milligrams.