An ambitious new study of Antarctica's ice shelves using an array of instruments, including sensors lowered more than 1,000 feet below the ice, has revealed clues about the mechanisms that are causing the Pine Island Glacier Ice Shelf, which holds back a portion of the massive West Antarctic Ice Sheet (WAIS), to melt. The study, along with other ongoing research, could result in more accurate estimates of future sea level rise.

The new study, published on Thursday in the journal Science, provides the first lengthy time series of melt rates underneath a rapidly changing ice shelf, and was the product of five years of arduous fieldwork, according to lead author Tim Stanton of the Naval Postgraduate School in Monterey, California. The study revealed that much of the meltwater travels through channels resembling river valleys beneath the ice sheet. One of the channels observed was about 2,000 feet wide, melting about 2.4 inches of ice per day, in much the same way that a meandering river gradually erodes adjacent land.

If the melt rate were to stay steady throughout the course of the year, which the study said is unlikely, it would amount to between 47 and 80 feet of ice loss per year, just through that single channel of meltwater.

“These are massive ice melt rates,” Stanton said in an interview. He said the flow rate was “very, very steady” during the 30-day period of observations, rather than varying with tides, for example. However, outside of the channels, the ice barely melts, the study found.

Ice shelves are the floating portions of outlet glaciers, and their stability in turn affects the stability of the larger ice sheets that lie behind them — much like a dam holding back a body of water. Previous studies have shown that ice shelves in Greenland and Antarctica can be melted from below by relatively warm ocean water, and the new study shows how this might be playing out with the Pine Island Glacier. 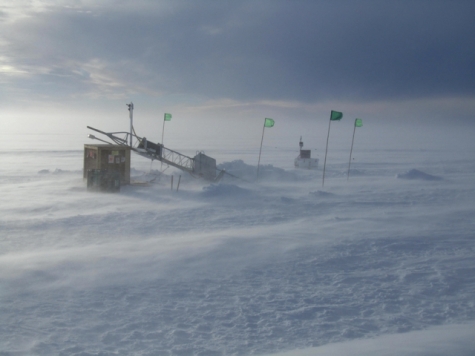 A surface drilling tower under construction as part of the Pine Island Glacier study.
Click to enlarge the image. Credit: Tim Stanton/Science.

Truffer said a priority for future studies is to improve the understanding of how heat from relatively warm ocean water moving underneath an ice shelf gets transported up and into the ice, across what is known as the boundary layer.

“The issue is that even if one knows how warm the water is and how rapidly it is flowing; it still takes an understanding of how the heat gets across the boundary layer that separates the large scale ocean currents from the ice.

When ice shelves melt faster they can cause the land-based ice sheets to speed up their movement into the ocean as well, boosting global sea levels. For scientists, understanding the dynamics at work both on top of and underneath ice shelves are crucial for getting sea level rise projections right.

Depending on the rate and extent of melt, the West Antarctic Ice Sheet has the potential to raise global sea level by several meters, which would be disastrous for coastal cities worldwide. Ice loss from the section of this ice sheet that borders the Amundsen Sea, where the Pine Island Glacier Ice Shelf is located, already accounts for about 7 percent of global sea level rise, the study said.

Pine Island Glacier is a main outlet of the WAIS that has retreated and accelerated its melt rate during the past several years, but its remoteness - it is located about 1,118 miles from McMurdo Station, the main logistical hub for Antarctic research - has hindered scientists’ ability to conduct field studies there. The glacier gained international attention when a massive iceberg broke loose from it in June.

For this study, researchers relied on a fleet of aircraft and snowmobile equipment to haul their drilling tools and provisions onto the ice shelf and endured four years of fundraising and logistical delays followed by five years of often grueling fieldwork. The researchers drilled boreholes through the ice, through which they deployed oceanographic sensors that could detect the movement of water and its salt content, among other variables, and combined this data with information from other land and air-based research platforms. Some of the instruments are still in Antarctica gathering data for future studies.

“The hope is that they are going to remain in there and keep reporting for maybe 1 or 2 years with great luck,” Stanton said.