It turns out that convincing people to go vegetarian is not the only way to combat the greenhouse gas and climate change footprint of raising livestock. A new study suggests that cattle farmers can do more to reduce emissions, making meat consumption less damaging to the environment, particularly in developing countries.

The study, published Monday in the Proceedings of the National Academy of Sciences, says if livestock producers used their land more efficiently by feeding cattle more high-energy food and using less land for grazing, they can reduce greenhouse gas emissions more effectively than if consumers across the globe consumed less meat and milk. 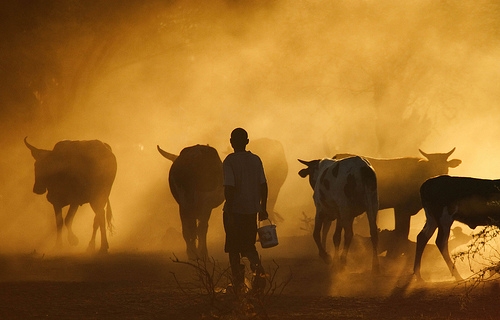 That contrasts with calls from scientists in Europe to raise taxes on meat because of meat production's greenhouse gas footprint, mainly in the form of methane and nitrous oxide emissions.

Cattle produce 12 percent of human-caused greenhouse gas emissions, which could be reduced 23 percent by 2030 through land-use efficiencies farmers could implement on their own, according to the study.

Consumers eating less meat is considered to be an effective way of reducing greenhouse gas emissions in the developed world, but in developing countries, where food availability is more sensitive to fluctuations in food prices, removing meat from people's diets would lead to greater hunger and malnutrition the study said.

The study concluded that the best strategy to reduce global greenhouse gas emissions from livestock farming is for farmers to be more efficient with their use of land rather than encouraging people to eat less meat in the developing world. Farmers would profit more if they used less land to raise their cattle by feeding them both grass and a high-calorie feed instead of just grass.

Livestock produce more milk when they eat energy-rich diets that include grain supplements, meaning that more livestock can be raised on less land, with fewer emissions per pound of meat or milk that is produced, the study said.

Targeting the production side of agriculture is a better way to reduce emissions overall, said the study’s lead author, Petr Havlik, a research scholar at the Austria-based International Institute for Applied Systems Analysis.

“If you go through reduction of consumption, you are acting only on the quantity part of the equation,” Havlik said, referring to the quantity of meat produced and eaten. If emissions are targeted on the production side, farmers can change the greenhouse gas intensity of their process, he said.

One caveat for U.S. meat lovers: Havlik said North America is ahead of most of the rest of the world in livestock production efficiency, and the study’s results apply mostly to agriculture on other continents.

“This study shows that there is not a linear relationship between meat consumption and related GHG emissions,” Havlik said in an email Monday.

Changes in the price of grassland and feed crops would encourage farmers to add more energy-rich feed to the diets of their cattle, and eventually the market would reward more efficient livestock production, he said.

Eric Davidson, an adjunct senior scientist at the Woods Hole Research Center in Falmouth, Mass., and author of a study describing how humans need to reduce meat consumption to have a smaller impact on global warming, said Monday he had not yet read Havlik's study, but said there are significant opportunities for livestock operations to reduce greenhouse gas emissions through nutrition management and land-use changes.

In South America, for example, greenhouse gas emissions increase when native forest is cut down for grazing purposes. Brazil is moving toward cattle diet intensification to reduce the need to cut more forests for expanding livestock production, he said.

But as Davidson noted, reducing meat consumption overall will still have a climate benefit.