The scientific agreement that climate change is happening, and that it's caused by human activity, is significant and growing, according to a new study published Thursday.

The research, which is the most comprehensive analysis of climate research to date, finds that 97.1 percent of the studies published between 1991 to 2011 that expressed a position on manmade climate change agreed that it was happening, and that it was due to human activity. 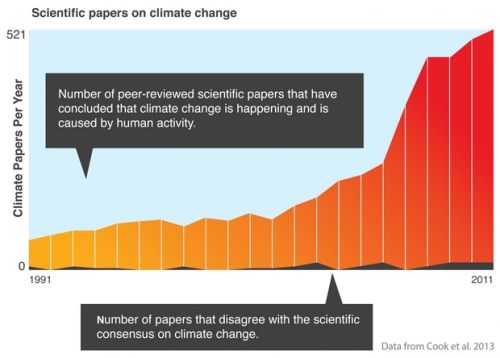 The study looked at peer reviewed research that mentioned climate change or global warming.  Peer review is the way that scientific journals approve research papers that are submitted. In peer review, group of scientists that weren't involved in the study, but who are experts in the field, look at the research being submitted and have approved that it meets scientific process standards, and the standards of that journal.

In 2011, 521 of those peer reviewed papers agreed that climate change is real, and that human activity is the cause.  Nine papers in 2011 disagreed.

John Cook, founder of skepticalscience.com and the lead author on the study, said the motivation for the analysis was the importance of scientific consensus in shaping public opinion, and therefore policy. “When people understand that climate scientists agree on human-caused global warming, they're more likely to support climate policy,” Cook said. “But when the public are asked how many climate scientists agree that humans are causing global warming, the average answer is around 50 percent.”

This “consensus gap” is what Cook and the research team is trying to close. “Raising awareness of the scientific consensus is a key step towards meaningful climate action,” Cook said.

In 2004 Naomi Oreskes, Professor of History and Science Studies at the University of California San Diego, published what many scientists consider the seminal study on climate change consensus. She also co-authored the book Merchants of Doubt, which identifies and examines the similarities between today's climate change conversation and previous controversies over tobacco smoking, acid rain, and the hole in the ozone layer.

Oreskes believes that the public isn't aware of the consensus because of deliberate efforts to cause confusion. “There has been a systematic attempt to create the impression that scientists did not have a consensus, as part of a broader strategy to prevent federal government action,” Oreskes said. “The public have been confused because people have been trying to confuse us.”

The study published Thursday is the first to take so many papers and authors into account. Doing a search on the popular science article website Web of Science for “climate change” or “global warming” produces over 12,000 results. Of these, 4,014 papers were identified to state a position on climate change. Among those, 3,896, or 97.1 percent endorsed the consensus that climate change was happening and that it was caused by human activity.

In an interesting result, Cook and his team found that over time, scientists tend to express a position on climate change less and less in their research papers. This is likely a result of consensus — that if a scientific conclusion has been reached, there's no need to continue to state that conclusion in new research. “Scientists tend to take the consensus for granted,” says Cook, “perhaps not realizing that the public still think it's a 50:50 debate.”

Reprinted with permission from Weather Underground.