Shifting diets away from meat could slash in half per capita greenhouse gas emissions related to eating habits worldwide and ward off additional deforestation — a major contributor to climate change, according to scientific findings published this week.

The consequences of land use change stemming from expanding agricultural production were the focus of a paper published Wednesday by the World Resources Institute. It showed that reducing heavy red meat consumption — primarily beef and lamb — would lead to a per capita food and land use-related greenhouse gas emissions reduction of between 15 and 35 percent by 2050. Going vegetarian could reduce those per capita emissions by half. 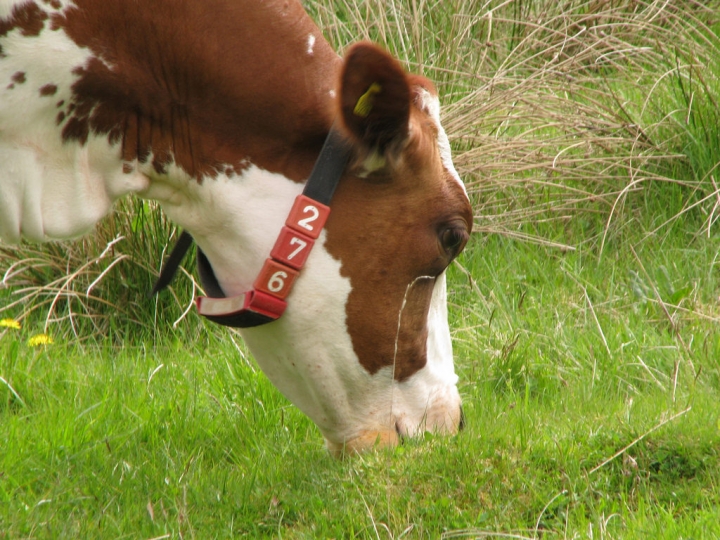 A second paper, published Tuesday in Nature Communications, analyzed about 500 different food consumption and production scenarios worldwide and found that nearly 300 of them could feed the global population without cutting down more forests. The biggest contributing factor to food-related deforestation is eating meat, the study says.

“Both (papers) highlight that dietary changes are very, very important — one for climate change impacts through greenhouse gas emissions, and the other purely through agricultural expansion,” said Oxford University Future of Food Program researcher Marco Springmann, who is unaffiliated with the studies.

At the heart of the challenge is population growth and what it means for both agriculture and climate over the next 35 years.

The world population is expected to grow from 7.1 billion people to 10 billion people by 2050, and about a third of them will be joining the middle class, which generally consumes more calories as incomes increase. Many of those additional calories come from meat-based foods, many of which are land and resource-intensive to produce and emit many greenhouse gases.

The WRI paper says that both the environment and the climate will benefit if people adopt a lower-calorie diet low in meat consumption, especially beef. Though beef demand has dropped 27 percent in the U.S. over the last 40 years, global beef demand is expected to spike 95 percent by 2050 compared to 2006 levels, especially in countries such as India and China where beef consumption is currently low.

Beef is highly inefficient to produce because only 1 percent of the feed cattle consume is converted to calories that people consume from eating beef, according to the research. Poultry convert 11 percent of their feed to human-edible calories.

Such poor efficiency means “beef uses more land and freshwater and generates more greenhouse gas emissions per unit of protein than any other commonly consumed food,” the paper says. 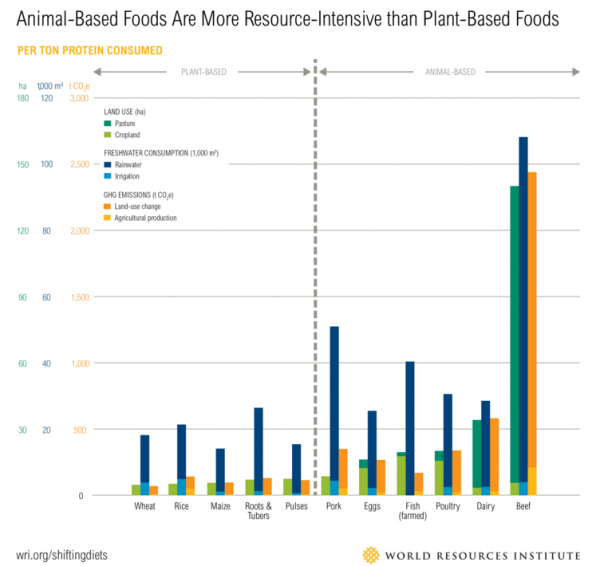 The yellow and orange bars on the graph illustrate the greenhouse gas emissions differences involved in different types of food production and related land use changes.
Credit: World Resources Institute

“The single most important thing is to eat less beef,” Timothy Searchinger, a Princeton University research scholar and co-author of the WRI report, said. “That is the overwhelming factor.”

Animal-based foods in the American diet accounted for about 85 percent of food-related greenhouse gas emissions in 2009 and about 90 percent of all agricultural land use, according to the study.

Reducing global beef consumption is critical to keeping global warming to within 2°C (3.6°F) as outlined in the Paris climate agreement, the study says.

Springmann said the WRI paper assumes that any additional food consumption anywhere results in a land use change, which is an “extreme” assumption to make. He said that even new beef production in some areas, such as Europe, would not necessarily result in a change in land use.

But such an extreme assumption could be valuable because few other scientists studying the environmental impact of food production factor land use changes into their emissions calculations, he said.

The second paper, in Nature, written by researchers at the Institute for Social Ecology in Vienna, suggested that the world can be fed without causing more deforestation mainly by reducing meat consumption.

“There is an implicit assumption among many forces that we have to encroach into the tropical forests, and we have to use more land to feed the people,” said study co-author Karlheinz Erb, associate professor of land use and global change at the Institute of Social Ecology at Alpen-Adria University in Vienna. “Here, we show that this argument is not valid. There are many options where we don’t have to encroach on forests.”

Going vegetarian is the best dietary change benefitting the forest and climate, the study says.

“A vegan or vegetarian diet is associated with only half the cropland demand, grazing intensity and overall biomass harvest of comparable meat-based human diets,” the study says, cautioning that its conclusions do not consider whether significantly reducing meat consumption is politically practical or desirable.

Springmann said the Alpen-Adria study is “a good piece of work,” but it does not quantify greenhouse gas emissions reductions resulting from less deforestation due to dietary shifts away from meat.

He said that even if the amount of farmland needed to feed a growing global population remains the same, changes in the way cropland is used could result in additional greenhouse gas emissions. If grazing land is converted to cropland, for example, emissions changes could result from the change in soil nutrients.

Both studies are valuable because they tie what people eat to their impact on the environment and climate, Springmann said.

“Both studies provide additional bricks of the puzzle,” he said.