September 10 generally marks the peak of hurricane season in the Atlantic Ocean basin, but this year there are no tropical cyclones to be seen. Currently, there are only two stormy areas that have only small chances of developing into tropical storms over the next few days.

For that dearth of activity, you can thank El Niño, or at least the conditions that are trying to become an El Niño. 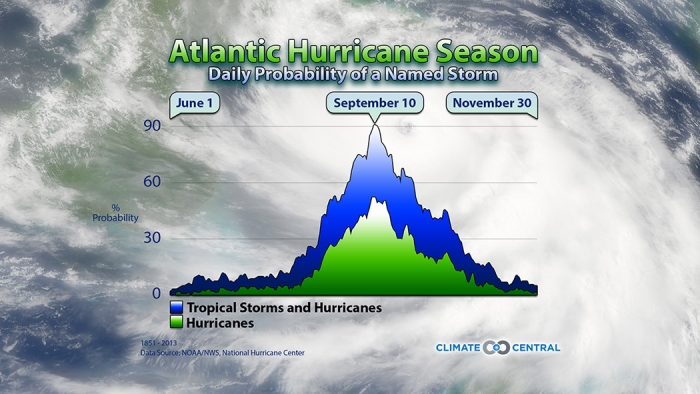 Though the tropical Pacific has been struggling to reach a full-blown El Niño state over the past six months, the warmer-than-average waters in the region have still had an effect on hurricane activity in both the Atlantic and eastern Pacific basins, experts said. In the former, it has helped to tamp down on storm formation, while in the latter, it has revved it up.

“Those two things tend to go together,” said climatologist Kevin Trenberth, of the National Center for Atmospheric Research in Boulder, Colo., who studies El Niño and its impacts. Hurricane activity in both basins tend to be negatively correlated, related to El Niño-Southern Oscillation (a climate cycle with a warm phase, El Niño, and a cool phase, La Niña).

Hurricane season lasts from June 1 to Nov. 30 in the Atlantic and May 15 to Nov. 30 in the eastern Pacific. The most active time for both basins is generally late summer through early autumn, when the key ingredients that make for prime storm formation conditions come together.

In particular, the oceans are generally at their warmest during this time, as it takes time for them to fully absorb the solar radiation from the June solar maximum. The August-October period accounts for 78 percent of all tropical storm activity in the Atlantic, according to the National Oceanic and Atmospheric Administration, and 96 percent of all major hurricane activity. The Pacific has a broader peak beginning in late May to early June and lasting through October.

So right now is when you’d really expect hurricane activity to be ramping up, especially in the Atlantic. Instead, the tropics have been relatively quiet. The last system, Tropical Storm Dolly, dissipated over Mexico on Sept. 3.

This is where El Niño comes in: The warmer ocean waters in the Pacific impact the atmosphere in a way that creates more stable, subsiding air over the Atlantic. Hurricanes need unstable air to really get going. El Niño also tends to bring more wind shear over the Atlantic. Wind shear is the change in speed and direction of winds at different heights in the atmosphere and can lop off the top of a developing storm.

“So far there’s certainly been an El Niño-like circulation over the tropical Atlantic,” and more wind shear, hurricane specialist Eric Blake, with the National Hurricane Center in Miami, told Climate Central earlier in the season.

On the other hand, the warmer waters mean more fuel for Pacific storms to feed upon and less wind shear. Together that makes for a more productive storm nursery.

El Niño conditions can also be associated with hurricanes taking the relatively northward path up near Hawaii, Trenberth said.

El Niño is, of course, not the only influence on hurricane activity, as there are other climate cycles that can play a role. Factors like dust blowing off the Sahara over the Atlantic and colder-than-normal ocean temperatures also have helped keep the lid on this Atlantic hurricane season.

But whether or not an El Niño has been officially declared — which happens when Pacific waters reach 0.5°C (0.9°F) above normal and are expected to stay there for three months — doesn’t matter to the storm environment, both Trenberth and Blake said.

“Just because it hasn’t met an arbitrary threshold” doesn’t mean that the characteristic effects of El Niño can’t be seen, Blake said.

You May Also Like:
Another Year, Another Record High for Greenhouse Gases
For Air Pollution, Trash Is a Burning Problem
New York to Become a Hub of Climate Hubbub
The International Space Station’s New Climate Mission