In Streak of Extreme Storms, What’s the Role of Warming?

The staggering rains that swamped some 60,000 houses in southern Louisiana and shattered the previous state rain record are the latest — and perhaps most remarkable — in a string of jaw-dropping rain events across the U.S. over the past year.

From South Carolina to Houston to West Virginia and Ellicott City, Md., each instance of extreme rainfall and subsequent flooding raises questions about the potential role of climate change in making such events more likely. 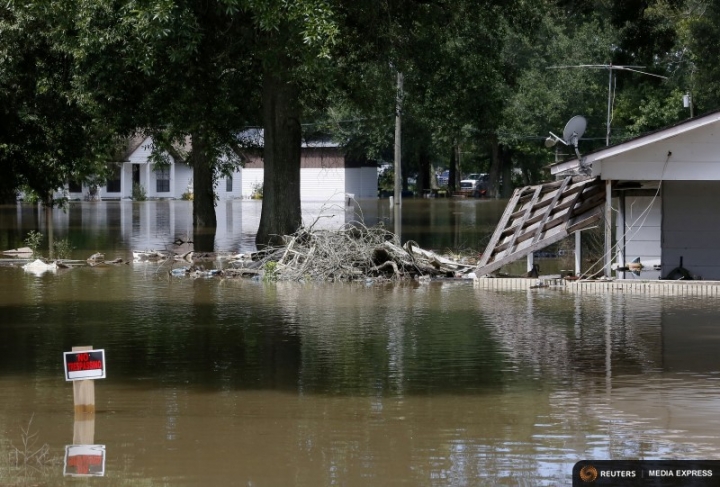 Storms are expected to unleash more rain in the future as the world continues to heat up and an uptick in heavy rainfall events in the U.S. over the past few decades is already evident.

So-called attribution studies have pointed to increased odds of certain events thanks to rising global temperatures, but what about the recent spate of intense rain events? What can we say about the potential role of global warming in juicing such a seemingly remarkable streak?

Even amongst the array of other mind-boggling rain and flood events around the U.S., the recent Louisiana disaster stands out.

The slow-moving storm continuously pulled moisture from the Gulf of Mexico, dumping rain over the same area for hours and hours. The Baton Rouge airport recorded 32 straight hours of rainfall, from the night of Aug. 11 through the morning of Aug. 13.

“It literally rained, for me, every waking minute of the day on Friday,” Barry Keim, the Louisiana state climatologist, said. “There was never a moment when it was not raining at my house.”

For Baton Rouge, a 1-in-100-year rain event (or one that has a 1 percent chance of happening in any given year), would be 14 inches falling over two days. That would already be a “pretty rare event,” Keim, who also studies climate extremes at Louisiana State University, said.

A 1-in-1,000-year event — “we’re talking about something that’s not likely to ever happen” — would be 21 inches falling over the same time period, he said.

There were nine stations in the area that topped that 1-in-1,000 level, two of which saw more than 25 inches in just two days. The highest rainfall was recorded in Watson, La., which saw 31.39 inches. That obliterated the previous two-day rainfall record by more than 7 inches.

Half of southern Louisiana received 10 inches or more of rain, and it’s possible that more homes were flooded in this event than by Hurricane Katrina, Keim said. Many of those homes hadn’t flooded during the previous flood of record, in 1983, or at any time since.

As the world warms, more water evaporates from the Earth’s surface into the atmosphere, which means that more moisture is available to storms like the one that hit Louisiana.

“So naturally, any event that would occur anyway is going to produce more rain and is more likely to produce flooding rains,” Ken Kunkel, a climate scientist with the National Centers for Environmental Information, said.

Total rainfall across Louisiana for the week ending in Aug. 18, 2016. A widespread area saw 10 inches or more of rain.
Click image to enlarge. Credit: NOAA

A trend in more heavy rainfall over recent decades has been noted in the Intergovernmental Panel on Climate Change report, the National Climate Assessment and “anywhere there’s data pretty much,” Adam Sobel, a climate scientist who leads Columbia University’s Initiative on Extreme Weather and Climate, said.

The National Climate Assessment concluded that heavy precipitation events have become both more common and more intense in the U.S. in the last few decades. Work of Kunkel’s included in the report showed a clear increase in the number of two-day rain events that were above a 1-in-5-year threshold.

In the Southeast specifically, there has been a 27 percent increase in the heaviest rain events, or those in the top 1 percent of all rains. Not every year has more heavy rainfall events than the last — 2012, for example, saw an intense, widespread drought — but the overall trend is clear.

Kunkel has extended his analysis used in the NCA through this event, and to date, 2016 already ranks in the top 1 percent of all years for heavy rainfall. (Last year had the third most events.) And with several months still to go, “we have plenty of time to pick up more,” he said.

Though he has studied these trends for years, Kunkel can still be surprised at the sheer magnitude of some downpours, including those in Louisiana.

It’s not just abundant moisture that drives deluges. Particular types of storms or the paths they follow can spur heavy rains, and warming may have differing effects on each. For example, a study published in February found that a certain jet stream pattern that led to one of wettest winters in U.K. history was more likely to occur with warming.

Attribution studies can account for all of these factors by using climate models to compare the likelihood of an event occurring in a world with greenhouse gas-driven warming and one without it. (They can also compare how often they occur now to how often they did so in the past if quality observations go back far enough in time.) Sometimes a clear climate change signal can’t be found, but that doesn’t mean one isn’t there.

The same process could be done with a series of events, experts said, comparing the relative likelihood of a certain number of extreme rain events happening in, say, the U.S., over a given period of time with and without global warming — and evaluating whether that number is more than would be expected by chance.

The U.S. is a large area, so it’s not surprising to have a few such events each year, Geert Jan van Oldenborgh of the Royal Netherlands Meteorological Institute (KNMI) said in an email. Van Oldenborgh works with Climate Central’s World Weather Attribution project to conduct rapid-response attribution after an extreme weather event.

It would take running more iterations of climate models to produce a robust number of years with multiple events, but “it’s definitely technically possible,” Sobel said. While no one has attempted it so far, Sobel said it was likely just a matter of time.

Sobel doesn’t think the onslaught of storms this year can be entirely chalked up to the influence of global warming, given other influences. These include impermeable surfaces like pavement, which can exacerbate flooding, as well as sprawl, which means heavy rains are more likely to fall on a populated area. Not to mention more media attention being paid to such events.

“They seem to be coming so fast and hard that I just can’t quite believe it’s all global warming,” Sobel said. “We expect to see more, but not way more by tomorrow.”