Underneath the Arctic Ocean sits a large reserve of methane, a potent greenhouse gas. Understanding how much of that is making it to the atmosphere is an important but relatively new area of research. The latest findings published on Sunday in Nature indicate that more could be escaping than previously thought, thanks in part to stormy weather.

The East Siberian Arctic Shelf is a swath of land underneath the shallows of the East Siberian Sea, which is part of the Arctic Ocean. It stretches for 2 million square miles and contains large deposits of methane hydrates, which are frozen deposits of highly concentrated methane. 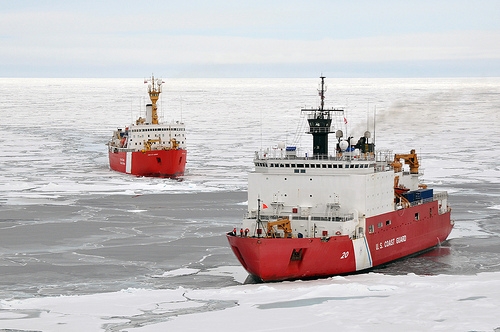 Canadian and American Coast Guard ships on a survey of the Arctic.
Credit: DVIDSHUB/Flickr

When the hydrates melt, they turn into methane gas, a greenhouse gas that is 25 times more potent than carbon dioxide. Methane hydrates are found throughout the world's oceans but generally under hundreds of feet of water. That means as they melt, there's more time for the gas to disperse and mix with the surrounding ocean water. But because the East Siberian Arctic Shelf is much shallower, with an average depth of 150 feet, there's more of a chance for that methane gas to reach the surface. That's why understanding how much methane is stored in the shelf and if those stores are stable is so important to climate researchers.

Some scientists suggested earlier this year that a massive release of methane from the shelf, referred to as a “methane bomb,” could cause abrupt climate change and cost the global economy $60 trillion. That claim has been met with much skepticism, in part because the amount of methane the shelf is currently releasing and the conditions it's stored under aren’t fully understood. The remoteness, logistics and inclement weather have impeded scientists’ research access to the region until fairly recently and data has been sparse.

That, however, is beginning to change.

“In 2003, we started from zero observational data on methane available for this area,” Natalia Shakhova, an Arctic researcher at the University of Alaska and lead author of the new study, said. Her previous work built a body of evidence for how methane leaked from the seabed while her new study refines the numbers a bit more and finds that strong storms can help stir methane up the water column quickly and release it into the atmosphere.

Shakhova has spent the past decade compiling data on the East Siberia Arctic Shelf through research cruises and flyovers of the region. She published initial results in 2010, which showed that methane has been escaping at hot spots where vents have formed from a combination of geothermal heat as well as warmer river water flowing into the region. Those results showed that 7 teragrams of methane is bubbling to the surface annually. That's roughly the equivalent of 10 percent of the methane emissions from U.S. oil and natural gas production and transmission in 2012.

The new research refined those results, showing the amount of methane reaching the surface is more than double those previous estimates. In all, Shakhova and her colleagues estimate that 17 teragrams are escaping each year, though the new study says the estimates are likely on the conservative end. Shakhova said those totals are on par with emissions from the Arctic tundra.

One of the reasons for the revised estimates was more rigorous measurements using an unmanned underwater vehicle with advanced sonar technology. It provided a clearer image of the seafloor and the amount of methane escaping from vents.

A sonar image showing the location of methane vents in a portion of the East Siberian Arctic Shelf.
Click image to enlarge. Credit: Shakhova et al., 2013

Another method Shakhova and her colleagues used to update their estimates involved taking methane measurements before and after storms passed over the shelf. The Siberian Sea has up to 70 stormy days annually when winds can help churn deeper water toward the surface.

Shakhova measured the amount of methane before and after storms in both the water column and atmosphere. After storms, methane was greatly reduced in the water column, indicating storms were helping ventilate methane into the atmosphere more rapidly.

“We should have much more concerns regarding subsea permafrost than we previously had,” Shakhova said about her results.

At the same time, she downplayed tying the research to the methane bomb theory espoused earlier this year, saying there’s not enough evidence to make that connection.

David Archer, a carbon cycle expert at the University of Chicago agreed. “In order to ignite an Arctic methane bomb you would have to ramp up (emissions) by a factor of 10 or 100 very quickly, and there's no evidence or any proposed mechanism that could make it blow up that quickly,” he said in an email. Archer also said that while the new research shows more methane is being emitted from the area than previously thought, it still represents only about 3 percent of global methane emissions from natural and human sources.