Drought-weary residents of the Southern Plains, do meteorologists ever have a welcome forecast for you: Rain. And potentially lots of it.

A large, low-pressure system cut off from the jet stream has formed over the Southwest and looks to bring several inches of rain to the Southern Plains. It will slowly trundle across the region over the next few days, pulling up juicy, moisture-laden air from over the Gulf of Mexico. Included in the areas that could see rain are the Texas Panhandle and western Oklahoma, two areas that have been in a drought for several years and are currently in extreme and exceptional drought, the highest ratings issued by the U.S. Drought Monitor.

Of course, the situation could change and it is impossible to tell exactly where storms will form and drop the most rain, “but this looks like our surest bet for awhile,” Gary McManus, Oklahoma’s state climatologist, told Climate Central.

“It looks like it might rain a lot,” he said. And while that will certainly help ease the effects of the drought, it won’t come close to ending it.

These areas of the Southern Plains have experienced dry season after dry season, which has left them bone dry and in a huge precipitation hole. The city of Wichita Falls, Texas, for example, has a staggering precipitation deficit of 40 inches; the past 42 months there have been the driest such period on record, worse even than the Dust Bowl of the 1930s.

“Soil moisture is non-existent,” said Michael Brewer, one of the authors of the Drought Monitor and a scientist with the National Climatic Data Center, said in an email. “Vegetation is gone in many places leaving bare soil,” which contributes to dust storms, he said.

In Texas, 240 counties were designated “primary natural disaster areas” by the U.S. Department of Agriculture in April, along with several counties in Oklahoma. The winter wheat crop, also affected by the cold winter, has suffered considerable damage. Pastureland that feeds livestock has been severely affected, and the stock ponds that provide them with water have dried up. Ranchers have been forced to send their cattle to slaughter early, or send them to more northerly locales, Brian Fuchs, another Drought Monitor author, told Climate Central. Communities are also being affected as reservoirs have dipped below capacity, forcing conservation measures to go into effect. Wichita Falls is even testing out a system to blend treated wastewater with reservoir water to supply the city. 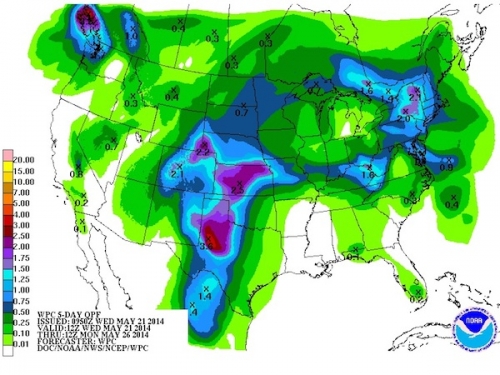 The Southern Plains drought began with unusually dry and hot conditions that fell into place in October 2010, then persisted as wet season after wet season came up dry, due to factors like La Nina (the counterpart to El Nino, when colder-than-normal waters are seen in the eastern tropical Pacific). While it is difficult to determine what percentage of any particular drought or other extreme event can be attributed to climate change, steadily increasing average temperatures caused by the rise of greenhouse gases in the atmosphere only serve to exacerbate the impacts of droughts. And climate change is expected to amplify regional patterns so that already arid areas become drier, while the water they’re missing will fall on already wet areas, according to reports from the Intergovernmental Panel on Climate Change and the U.S. government.

The water woes for the Southern Plains have continued this year, as the storms that have moved over the area have zipped through, dumping rain on ground that is baked hard from heat and unable to absorb that much water that quickly. These storms have also tended to drop rain on the eastern parts of Oklahoma and Texas, which need it less, McManus said. Swaths of western Oklahoma and the Oklahoma Panhandle have seen more than 30 days go by without even a quarter of an inch of rain falling — some have even seen more than 100 days. And May is typically the wettest time of year for some of those spots.

The low-pressure system that looks to be aiming for the region this week is “really a different animal,” McManus said, because it is expected to move slowly, potentially making it easier for the ground to actually soak up the rain.

Forecasts currently have up to 3 inches of rain falling in the broader region, with some localized areas getting heavier rains and others getting less. 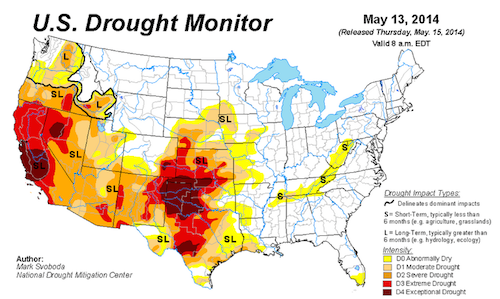 The stages of drought across the contiguous U.S. as of May 15. About 38 percent of the country was in some form of drought, mostly concentrated in California and the Southern Plains.
Credit: U.S. Drought Monitor

Of course, with such huge rain deficits in place, a couple inches will be just “a chink in the armor” of the drought, as McManus put it.

“You’re not going to end the drought with this rainfall,” he said. But “you can definitely improve it, especially the short-term impacts.”

In particular, farmers may be able to sow summer crops, and feed for livestock, and a bit more water may be added to reservoirs that are significantly below normal.

Plants may also finally “green up” and put an end to the extended wildfire season, which normally only lasts through early spring, by robbing the flames of the dry fuel they need to flare up.

The soggy weather, which could last through the Memorial Day weekend, may dampen outdoor holiday plans, but “I think everyone out there is ready to spend a soggy weekend indoors,” McManus said.