Storm Pounds Calif., but to the Drought, Just a Spritz

Northern California is taking a pounding from an intense storm that is generating hurricane-force winds and has already dumped more than 7 inches of rain in some of the hardest-hit areas. 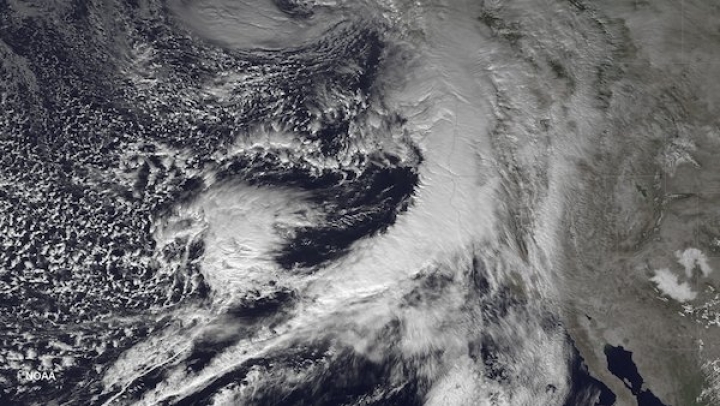 The strong storm dumping several inches of rain and potentially feet of snow on parts of California.
Credit: NOAA

Good news, right? After all, California began its fourth year of drought in October because of several winter wet seasons that turned out to be painstakingly dry, so clearly it needs all the rain it can get. But the situation is more complicated than that: So much rain at once can cause dangerous flooding (already being documented on social media) and landslides, meaning a lot of that rain washes into streams and rivers and is flushed out to sea.

The state is also in such a deep precipitation hole that even a storm like this may only make a small dent in a drought so intense it could be the worst dry spell of the past 1,200 years.

Drops in the Drought Bucket

California’s drought has been building for more than three years, a combination of rain failing to fall and heat that increased evaporation and water demand from residents. Nearing the end of what is virtually certain to be its warmest year on record, about 80 percent of the state is still in the worst two categories of drought recognized by the U.S. Drought Monitor.

A series of storms around Thanksgiving brought some rain and, more importantly, snow to parts of California. But they were only a drop in the proverbial bucket.

Reservoirs across the state are still well below average levels, and the mountain snowpack — critical to maintaining the state’s water supply — is at a statewide average of 28 percent of what is normal for this time of year. The storms so far have been so warm that they dumped a lot of rain instead of snow, said Anthony Artusa, a seasonal forecaster with the National Oceanic and Atmospheric Administration (NOAA).

None of the precipitation that has fallen has resulted in much of a change on the Drought Monitor’s map of California. That is partly because, just as it takes awhile to see the impacts of a lack of precipitation, it can take awhile for the benefits of rain to be seen in terms of water returning to streams, moisture percolating down into the soil and vegetation taking up the water.

“There is often a lag between a major precipitation event (or multiple events) and accurate assessment of what the actual impacts are,” Artusa, one of the authors of the Drought Monitor, wrote in an email.

The rain that has fallen also isn’t nearly enough to make up for the years-long deficit. Two maps generated by Climate Central show the amount of rain that would need to fall in one month and six months to end the droughts in California and elsewhere around the country, along with the odds of such events actually happening.

Between 15 and 21 inches of rain would have to fall across much of California in one month to make up the precipitation deficit, and about 28 to 49 inches would need to fall over the course of six months to do the same. The chances of either happening? Not very high. They range from 0 to 16 percent in the one-month scenario and a slightly higher 0 to 30 percent over six months.

Those numbers aren’t surprising: Drought experts have long said it will take California years to fully recover from the depths of this drought.

The current storm is slated to drop 3 to 6 inches of rain across the central and northern portions of the state with some locally higher amounts, as well as several feet of snow in the Sierra Nevada range. It’s critical that snow, and not rain, falls in higher elevations so that there is a healthy snowpack come spring, when it melts and slowly trickles into the water system. If rain falls in those areas, it can eat away at what little snow is there.

The liquid water equivalent (or how much water you’d get if that snow melted) is forecast to be around 5 to 9 inches, so that could lead to some small changes in the drought map next week, Artusa said.

But the key to ending the drought is for the storms to keep coming. NOAA does predict a good chance for more rain in the next two weeks, but the precipitation really needs to fall all winter.

“Drought is a water-balance issue, so if winter storms keep impacting California, the long-term deficits will continue to be overcome,” Artusa said. “If the ‘faucet stops’ soon, then only limited improvement will be realized, and deficits will gradually begin to re-mount.”