Snow and rain are already spreading across the southeastern U.S. as a powerful storm ramps up across the region. Snow and rain are only the tip of the weather iceberg with freezing rain and ice expected to cause significant damage from Georgia through the Carolinas before the storm slides up the East Coast, bringing the potential for heavy snow around Washington D.C. and points north.

Residents in the Southeast are more accustomed to rain and highs in the 50s in the winter, but this winter has brought much colder temperatures to the region.

An early January cold spell brought temperatures to as low as 6°F in Atlanta. January average tempeatures were 3-8°F below average for much of the region. Later in the month 2 inches of snow fell across Georgia and Alabama, which caused paralyzing gridlock to Atlanta and more than 1,000 car accidents across the region. 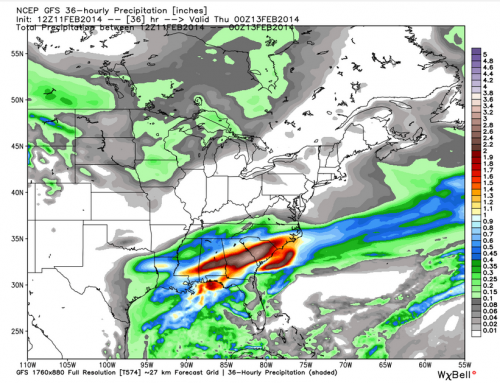 A map showing precipitation potential through Wednesday evening for the eastern half of the U.S. Up to an inch of that could fall as freezing rain and 9 inches as snow for locations in the Southeast.
Credit: WeatherBell Analytics

After a short respite, the next bout of winter weather is stretching its fingers across the region.

“We have the first wave going through right now. They have some pretty good snow totals between Raleigh and Willimington (North Carolina). There were some totals in the 5-inch range. However, the next system is the one everyone is bracing for,” William Schmitz, a service climatologist for the Southeast Regional Climate Center, said.

Rain was also reported in Atlanta and freezing rain in parts of Mississippi on Tuesday morning.

The latter offers a taste of what’s to come as low pressure organizes off the Gulf Coast and pushes northeast. As the warm, moist air associated with the low moves into the region, it will come in contact with cold air currently dropping over the Southern Plains.

By Wednesday morning, those two air masses will meet and freezing rain will spread over most of the Southeast. The epicenter for the most intense freezing rain and ice will be from Atlanta to Columbia, S.C. Up to an inch of ice could coat trees, roads, and powerlines by Wednesday evening.

The extent and depth of ice led the National Weather Service’s Atlanta office to ominously warn, “. . . this winter storm may be of historic proportions for portions of the area.”

On Twitter, the NWS added that the most comparable storm was an event in January 2000 when more than 500,000 homes lost power in the Southeast with more than 300,000 of those in Atlanta.

Schmitz said other storms that had broad impacts on the region include an ice storm in 1973 and another in 2005.

Other parts of the Southeast will see lower totals of freezing rain, but it could still be problematic for residents. According to the Weather Channel, a half inch of ice is enough to down powerlines and tree branches. An inch of ice would likely lead to widespread power outages.

Icing occurs when frozen precipitation falls through a pocket of warm air, melts and then refreezes when it comes in contact with colder surfaces.

In addition to freezing rain, snow will blanket parts of the southern Appalachians. The forecast for northern Georgia calls for up to 7 inches of heavy, wet snow by Wednesday night with locally higher amounts. Ashville, N.C., could get 6-9 inches by Thursday morning. Traces of ice are also possible in those areas.

Georgia and Alabama state and city officials were criticized for ignoring forecast warnings and being slow to respond to January's storm. With a more potent storm on the horizon, those same officials are taking no chances of being caught off guard again.

Georgia Governor Nathan Deal declared a state of emergency in 88 of the state’s 159 counties. More than 600 flights have already been canceled out of Atlanta’s Hartsfield Airport, the busiest travel hub in the world. And in North Carolina, 100 trucks have been preemptively salting roads ahead of the storm.

The Mid-Atlantic and Northeast will feel the brunt of the storm on Thursday and Friday as the storm crosses from the Gulf Coast to the Atlantic. Initial estimates from the National Weather Service show 6-8 inches of snow are possible from Philadelphia to New York through Friday morning with the highest amounts occurring inland.