Renewable electricity goals put in place by 29 states are cutting pollution that causes climate change, but they are only making a minuscule difference in overall U.S. and global greenhouse gas emissions, according to a report released Tuesday by the Lawrence Berkeley National Laboratory. 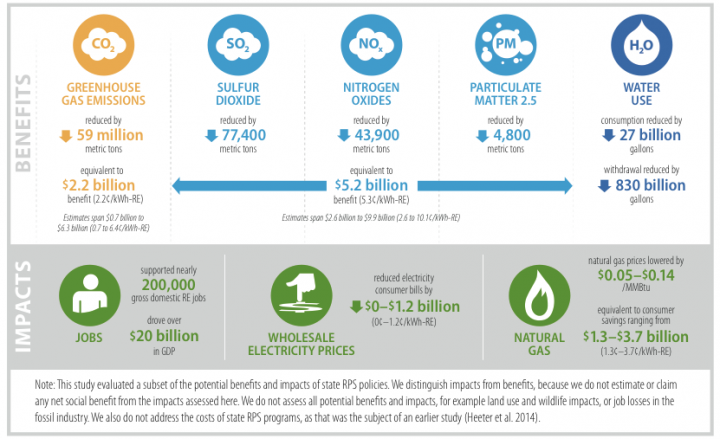 “In general terms, we certainly find that RPS programs in 2013 reduced greenhouse gas emissions providing important climate change reduction benefits,” Ryan Wiser, a senior scientist focusing on energy markets and policy at Berkeley Lab, said. “The scale of the climate change ‘problem’ is enormous, if we are to believe the IPCC, and existing state RPS programs have just scratched the surface.”

The Berkeley report focuses on the most recent year for which data is available — 2013. That year, 2.3 percent of U.S. electricity came from low-carbon sources such as wind and solar that were built to meet renewable portfolio standards. Those sources resulted in a 3.6 percent reduction in total electricity produced from fossil fuels nationally, the report says.

Coal-fired power plants use a lot of water for cooling, so less water is consumed for electric power generation when states switch to renewables. Water consumption in states with RPS standards fell by 27 billion gallons because of renewables use, or roughly 2 percent of total U.S. power sector water consumption.

“Water use is largely a regional issue,” Wiser said. “We do see significant water use reductions in a number of drought-prone regions. The largest withdrawal savings are thought to exist in California, and the largest consumption savings are in the state of Texas.”

Both states have suffered withering drought recently, with California continuing to endure its most severe drought in recent history.

Renewables standards vary widely from state to state. When Hawaii Gov. David Ige signed the state’s renewable energy bill into law last June, the Aloha State became the first in the U.S. to mandate all of its electricity come from renewables, a goal that must be met by 2045.

California, Maine and New York each have a mandate for at least 30 percent of their power to come from renewables.

“This analysis today was of course retrospective in nature, looking at the year 2013,” Galen Barbose, a scientist in Berkeley Lab’s electricity markets and policy group, said. “State RPS targets will ramp up considerably from those levels over time.”

You May Also Like:
Florida’s Record Warm 2015 an Outlier in U.S. East
More Than 50,000 Wind Turbines Now Twirl Across U.S.
What Happened to the Polar Vortex?
Gulf of Maine Fishermen Face Warming ‘Double Whammy’