Squid Threatened by Ocean Acidity Caused by Rise in CO2

LONDON – That jet-propelled cephalopod of the seas, the squid, could be in for a hard time. As atmospheric carbon dioxide levels rise, so the oceans become more acid, and this is not good news for one of the most important animals of the ocean ecosystem.

Aran Mooney of the Woods Hole Oceanographic Institution in the U.S. and other colleagues decided to take a look at what changing pH levels might do for the creature sometimes served up diced into rings, and fried, as calamari, or sometimes as the sauce in a pasta, cooked in its own ink. 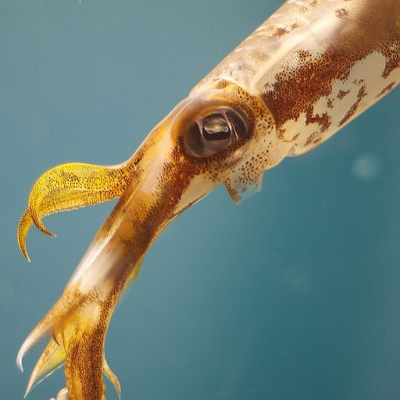 Scientists reported squid raised in the highly acidic water took longer to develop, were 5 percent smaller on average, and some developed malformed statoliths – carbonate crystals that help the squid orient itself while swimming.
Credit: Tokyo Sea Life Park
The researchers took both male and female longfin squid – a commercially-prized variety – from the waters of Vineyard Sound off the coast of Massachusetts and kept them in a laboratory tank until they mated. Some of the eggs were transferred to an experimental tank, some kept in existing seawater.

One sample tank in effect “breathed” today’s air. The other was subjected to air enriched with higher carbon dioxide levels – dissolving as carbonic acid – until the tank water reached the higher acidity levels predicted 100 years from now. Then they noted how the baby squid developed.

The scientists reported in the journal PLoS One that animals raised in the highly acidic water took longer to develop, were 5 percent smaller on average, and some developed malformed statoliths – carbonate crystals that help the squid orient itself while swimming.

“The fact that we found an impact in everything we measured was pretty astounding,” said Dr. Mooney. “Squid are at the center of the ocean ecosystem – nearly all animals are eating or eaten by squid. So if anything happens to these guys, it has repercussions up the food chain and down the food chain.”

In 2011 U.S. fishermen landed $100 million worth of squid: the creature is also food for tuna and hake, both commercially valuable catches.

The next step in the research is to look at the effects of differing acidic levels and on the impact of changing sea temperatures.  Climate change isn’t the only challenge that confronts the creatures of the sea: overfishing and ocean pollution are also big and growing problems. But warm water fish can migrate to cooler temperatures, and have already begun to do so.

Governments can regulate fish catches and establish marine reserves – and have begun to do so. But the research into the changing chemistry of the seas really is a voyage of discovery: animals evolved over millions of years to adapt very precisely to today’s conditions, and as they develop they quite literally fashion themselves with the materials in the sea water around them.

Swift changes in ocean chemistry – and in evolutionary terms, a century is a very short time – could affect ocean ecosystems in unprecedented and unpredictable ways.