The Southwest May Have Entered a ‘Drier Climate State’

The Southwest is already the most arid part of the U.S. Now new research indicates it’s becoming even more dry as wet weather patterns, quite literally, dry up.

The change could herald a pattern shift and raises the specter of megadrought in the region. 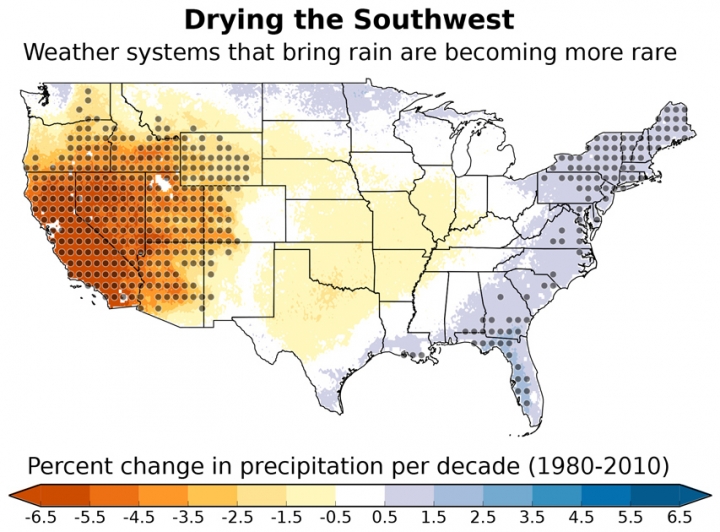 Precipitation across the U.S. that can be attributed to these changes in weather patterns. The gray dots show areas where the results are statistically significant.
Credit: Andreas Prein

“We see a very intense trend in the Southwest,” Andreas Prein, a postdoctoral researcher at the National Center for Atmospheric Research, said. “The Southwest might already have drifted into a drier climate state.”

Prein, who led the research published on Thursday in Geophysical Research Letters, looked at weather patterns rather than average trends in precipitation. The team identified 12 major patterns, only three of which are favorable for rain in the Southwest.

In an ominous finding for the region, they found that over the past 30 years, those three rainy patterns are becoming less frequent and the rains and mountain snow that come with them are drying up.

Less rain and mountain snow in an already dry region is a recipe for severe drought. There’s an 80 percent chance the region could face a megadrought lasting decades as the climate warms, according to research published last year. The new findings reinforce just how serious that threat is.

“Nowadays, the droughts are not the same as 30 years ago. They can be more intense and last longer than we would expect 30 years ago,” Prein said.

While Prein did not look directly at whether the current drying was driven by climate change or natural forces, the main climatic driver is an increase in high pressure in the northeast Pacific Ocean that essentially steers stormy weather away from the region. (You might recall a feature called the ridiculously resilient ridge doing something similar and driving the California drought. That’s kinda what’s happening in the Southwest.)

“We would expect something like that from climate change,” Prein said. “The only surprise was that this can be detected in observational datasets.”

The findings have huge implications for a region that’s home to some of the nation’s fastest growing cities that are already battling over scarce water resources.

“If you look at average changes, you’re missing most of what’s actually going on,” Daniel Swain, a PhD candidate at Stanford University, said. “Are wettest days becoming wetter, are the driest days becoming more common? It has a lot of practical implications for humans and ecosystems that are adapted to a certain degree.”

Swain, who was not associated with the study, said that the approach of looking at pattern changes had the potential to be a more effective way to understand climate change and natural impacts that matter the most people.

“We feel changes in climate through weather. In some cases, it does help to think of climate change through the lens of changing weather patterns and this paper is one way of doing that,” he said.

Adding to the woes is rising temperatures, which help bake in drought. While California has seen a big precipitation deficit, it’s been record heat that’s really helped turn the current drought into one of epic proportions. With heat projected to continue rising, it’s clear the Southwest will have to adapt to more than just dry conditions.

You May Also Like:
UK Forecasters: More Warming in Store Over Next 5 Years
These Paintings Turn Climate Data Into Art
Warming Ups Odds And Costs of Extreme U.K. Rains
Watch All of 2015’s Weather in Super High-Def