Climate scientists still haven’t figured out the reason for the so-called “pause” in global warming — more accurately, a slowdown in the rate of warming over the past decade or so — even as emissions of heat-trapping carbon dioxide continue to increase. But there’s another sort of pause, involving a different greenhouse gas, that baffles them as well. From 1999 through 2006, methane concentrations in the atmosphere stopped increasing after more than a decade of strong growth. Then they took off again. “It is,” said Euan Nisbet, of the University of London in an interview, “a real puzzle.” 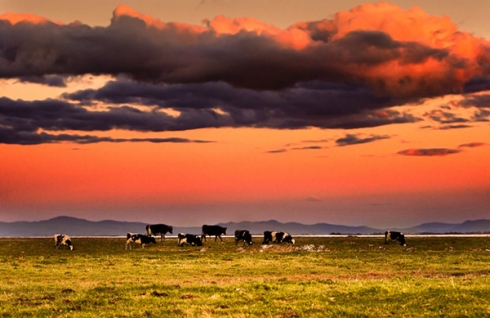 It’s an important puzzle to solve, because while methane remains in the atmosphere for a shorter time than carbon dioxide, it’s much more efficient at trapping heat, which contributes to global warming. Pound for pound, says the Environmental Protection Agency, the impact of methane is more than 20 times greater than that of CO2 over a 100-year period.

Nisbet and two colleagues have now tried to tackle the issue in a new paper in the January 31 issue Science. And while they offer no definitive answer, they offer many possibilities. “In the Northern hemisphere there has been a very sharp increase in Chinese coal production,” Nisbet said. Methane-rich natural gas is common in coal deposits, and, Nisbet said, “the deeper coal mines now being exploited are quite gassy.”

Methane can leak from natural gas wells and pipelines, too, and while the conventional gas-drilling industry has been increasingly careful about stopping leaks, the scientists argue that the newer technique of hydraulic fracturing, or fracking, is probably much leakier.

But the scientists suggest that the greater contribution to skyrocketing methane levels has more to do with biological sources of the gas. Methane molecules are made of carbon and hydrogen atoms, and the carbon in biological methane tends to be slightly lighter than the carbon in methane associated with fossil fuels. And over the past decade or so, the proportion of lighter methane in the atmosphere compared to heavier methane has been rising. “I think this perspective is basically right,” said Martin Helmann, of the Max Planck Institute for Biogeochemistry, in Jena, Germany, in an email. Helmann was not involved in the research.

The authors of the Science paper have some ideas about why biological sources of methane may be increasing. “In the southern hemisphere especially,” Nisbet said, “but also in the northern tropics, a series of really wet years has caused wetlands to expand”—and vegetation decomposing in swamps and shallow lakes is a well known source of natural methane emissions. Another is cows, which generate methane as they digest their food, then belch it out into the air.

These explanations, however, aren’t at all definitive — another key point Nisbet and his co-authors make in the Science paper. “The measurements we make in the air are direct,” he said. “Estimates of where methane is coming from, by contrast, is much less reliable. You estimate the contributions from gas leaks, count up the cows, estimate the emissions from wetlands. There’s obviously going to be a lot of error.”

And in fact, there is: the estimates of how much methane should be going into the atmosphere are greater than what actually ends up there. Tracking methane emissions more accurately is crucial, said the scientists, and not just as an academic exercise.

“If we want to control greenhouse-gas emissions,” Nisbet said, “it’s obviously important to know where the emissions are coming from.”

You May Also Like
China’s Growing Coal Use Is World’s Growing Problem
The Year in Weather Like Never Seen Before
Polar Vortex Is Back: Coldest of the Cold En Route to U.S.
Obama’s State of the Union Climate Mention Fits Pattern