Some Voters Taking on Fracking Nov. 5, But Is it a Trend?

Regulating hydraulic fracturing, or “fracking,” is often the domain of individual states, but on election day on Nov. 5, voters in cities in Colorado and Ohio will determine whether cities in their states should be able to regulate oil and gas development themselves.

Efforts to ban or restrict fracking by referendum may be an emerging trend across the country as domestic shale oil and natural gas development booms in the U.S., raising concerns about its impacts on climate, public health and groundwater quality. The U.S. is expected to become the world’s biggest producer of crude oil and natural gas by the end of 2013 because fracking and an oil and gas well development technique called horizontal drilling have made it highly profitable to reach oil and gas deposits once thought to be economically inaccessible. 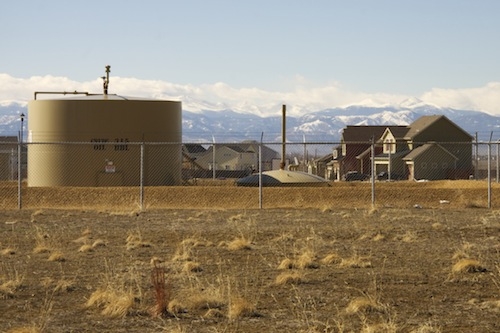 A crude oil tank connected to an oil well in a suburb north of Denver.
Credit: Bobby Magill

Regardless of their eventual success or failure, the measures show that there is a lack of confidence in state regulators to prevent fracking from harming human health and the environment, and people are taking matters into their own hands, said Pete Maysmith, executive director of Conservation Colorado, one of that state’s largest environmental groups.

The environmental group Food and Water Watch counts about 400 measures at all levels of state and local governments nationwide that have taken steps in recent years to regulate or stop fracking. But it isn’t clear yet if the measures that ban or place a moratorium on fracking are outliers or part of a lasting movement.

To reach the rich oil and gas deposits, energy companies drill a vertical wellbore often thousands of feet into the ground and curve the bore so it penetrates horizontally through an oil or gas-bearing layer of rock. Water, chemicals, sand and other substances are then injected at high pressure into the bore, fracturing — ”fracking” — the rock and allowing crude oil and natural gas to flow through the well to the surface. Studies have suggested fracking and natural gas production from fracking could involve methane leaks that fuel climate change, and raising concern that the process is also causing groundwater contamination and air pollution.

Fracking is behind the oil and gas boom in the Bakken shale of North Dakota, the Eagle Ford shale of south Texas, the Marcellus shale of Pennsylvania, Ohio and West Virginia and, among many other places across the country, the Niobrara shale of Colorado, where fracking is as much of a political fight this election season as any battle for public office.

The suburbs northeast of Denver are awash in oil and gas development, part of a shale oil and natural gas drilling and fracking boom that has been exploding in northeast Colorado since 2008. The county with the most drilling, Weld County, has more than 20,000 active oil and gas wells today, and drilling rigs and convoys of fracking trucks keep on coming, looking for more crude and natural gas.

Even as studies have shown energy development along Colorado’s Front Range urban corridor is likely having an impact on air quality there, Weld County officials have long expressed their unequivocal support for expanding oil and gas development because an oil boom has also meant an economic boom for the county. Weld officials have gone so far as to place a measure on the Nov. 5 general election ballot in the county calling for Weld and many of the state’s other Great Plains counties to secede from from Colorado in part to avoid regulations on energy development, which they see as stifling to the region’s energy and agriculture-based economy.

But with energy development spilling out of the county and into suburban areas north of Denver, where many people are just as concerned about public health and quality of life as they are about economic prosperity, concerns about the impacts of fracking are turning into ballot initiatives and legal battles with the state government.

Galvanized after voters in Longmont, Colo., approved a fracking ban in 2012, concerned residents in the nearby cities of Broomfield, Lafayette, Boulder and Fort Collins are asking voters to either permanently or temporarily stop fracking in those cities on election day.

“We believe (fracking) is relatively untested and we believe there is evidence there is significant problems and significant risks,” said Laura Fronckiewicz, a leader of Our Broomfield, a group campaigning for an anti-fracking measure appearing on ballots in Broomfield near Denver.

She said she is concerned about new oil and gas wells being approved near a kindergarten and others that could be drilled near homes and schools in northern Colorado, where by mid-October oil and gas industry groups had spent more than $600,000 to oppose the ballot measures — about 40 times the $15,000 that anti-fracking groups had raised.

The battle is also being fought in northern Ohio, where voters in Youngstown, Oberlin and Bowling Green are being asked to vote Nov. 5 on a “community bill of rights,” which bans fracking.

“It gives the local citizens the right to clean drinking water, pure air, the rights of natural communities, the right to peaceful enjoyment in our homes, local self government,” said Susie Beiersdorfer, an organizer of Frack-Free Mahoning Valley in Youngstown, where a similar measure failed in May. “We do not want drilling rigs, injection wells, compressor stations, processing facilities or other facilities within the city of Youngstown.”

“We are definitely seeing more people taking part in the conversation as a whole, not necessarily more people against drilling,” said Samantha Malone, manager of science and communications for Pittsburgh-based FracTracker, a former project of the University of Pittsburgh that is now independent.

New York is a hot spot for anti-fracking sentiment with dozens of local communities either banning fracking outright or placing a temporary moratorium on it, Malone said.

That conversation has been going on in New York at least since 2008 when former Gov. David Patterson placed a now expired moratorium on fracking, which is still barred in New York until the state can complete a report on the health impacts of fracking.

As North Dakota and Texas welcome the wave of drilling the shale oil and gas boom has brought them, Vermont became the first state to ban fracking completely in 2012, and California Gov. Jerry Brown signed a law in September regulating fracking for the first time in that state.

“In Colorado, Michigan, and Ohio, more and more groups are taking part in the conversation and becoming more aware of what is at risk, both the positives and negatives of drilling,” Malone said. “We’re seeing more communities that are banning it, and more communities are stepping up and saying, hey, this is something we want.”

One of those cities is Greeley, Colo., whose mayor has lobbied for fewer regulations on industry, according to the Denver Post, as the city makes more than $1 million annually on selling excess city drinking water to oil and gas companies for fracking. 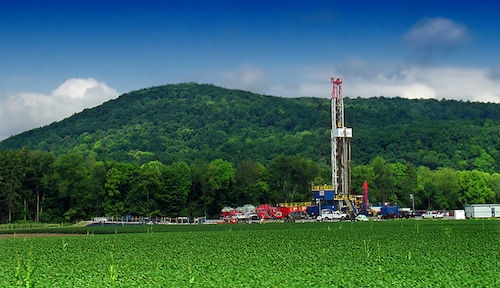 Fracking is occurring in and around people’s backyards, sometimes in very attractive areas, often sparking opposition to the change drilling and fracking creates, he said.

“If this trend continues, it’s really going to curtail drilling in places that would be otherwise economic and productive for these companies to drill in,” Huntington said. “My own guess: As people learn a little more about some of the negative side and start thinking about the positive side of having more shale gas, that maybe this trend might not continue quite as strong as it has.”

Local control over drilling is particularly chilling to the oil and gas industry because it creates a regulatory environment too complex for the industry to invest there, Huntington said.

That was a factor in the lawsuits filed in Colorado last year after Longmont’s city council heavily regulated oil and gas development in the city and voters there later banned fracking altogether. The state of Colorado sued Longmont for overstepping its regulatory authority, a suit followed by a second filed by the oil and gas industry.

The threat of legal action was one factor in the Fort Collins, Colo., city council backing down from a complete fracking ban there earlier this year. Anti-fracking groups, frustrated that fracking could still occur in the city despite the council keeping most of Fort Collins off limits to it, succeeded in putting a 5-year moratorium on the Nov. 5 ballot.

“These initiatives are clearly part of a larger trend, although I have no idea one way or the other if they are coordinated in any meaningful sense,” said Colorado State University political science professor Robert Duffy. “In part, that is because the ones in Colorado are worded differently and seek different goals.”

Some of the initiatives justify a ban on energy development by declaring that communities have a right to ban harmful activities, he said.

“As a result, the industry (and the state) really dislike that one, because it seeks to undercut the ability of the state to have primary jurisdiction in such matters,” Duffy said.

Will the measures pass as the industry vastly outspends fracking opponents? Fracking opponents prevailed in Longmont in 2012 despite being outspent by industry. But this time could be different.

“I think this is an issue that has gotten a lot of attention in the last year or two, or even three. The amount of information that voters have is growing significantly and quickly,” Maysmith said. “I don’t know what’s going to happen this year.”

But voters can be fickle, said John McNulty, visiting scholar of political science at Binghamton University in New York.

“Referenda usually have more success in issue areas where the public is better informed (or thinks they're better informed) about the issue at hand — things like immigration, gay marriage, etc.,” he said. “More complicated issues such as energy or environmental matters — i.e.new drilling technologies, with complex, long-term, indefinite risks vs. immediate rewards in jobs and tax revenue — generally fare less well at the ballot box.”