A “massive” global expansion of solar power — possibly enough to supply about a third or more of the world’s electricity — may be necessary by 2050 to reduce the impacts of fossil fuels on the climate, according to a report published by MIT this week.

Solar’s efficiency and abundance make it the clean energy source best suited to cut greenhouse gas emissions. But for it to make a big enough climate difference, the amount of solar power generation capacity on U.S. soil would have to increase from today’s 20 gigawatts to up to 400 gigawatts, or enough to provide power to 80 million homes, Robert Stoner, deputy director of the MIT Energy Initiative and a co-author of the report, said. 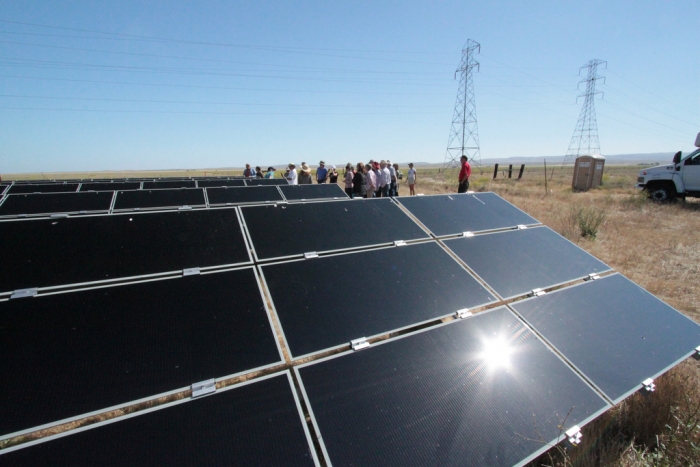 The study says that may not happen in the U.S. unless solar industry-supported funding and incentives are almost completely re-imagined. The solar industry currently supports keeping those incentives in place.

Those changes would include scrapping state renewable power generation standards for utilities and directly subsidizing solar power generation in lieu of tax credits, according to the report, “The Future of Solar Energy.” As new ways of funding solar power are being worked out, new technology needs to be developed for solar energy storage, smarter power grid management and new kinds of solar panels that use more abundant raw materials that would help keep solar panel prices low, the study suggests.

Today, the solar industry is booming. The cost of a utility scale solar photovoltaic installation has fallen about 55 percent since 2010. Employment in the solar industry rose 22 percent in 2014 after the number of solar projects in the U.S. jumped 140 percent the year before. But the solar industry fears its expansion could slow if Congress does not renew a federal solar subsidy, the Solar Investment Tax Credit, after it expires in 2016.

John Rogers, senior energy analyst for the Union of Concerned Scientists, said the study gets a lot of things right and talks about building the foundation for a massive scale-up in solar power in the U.S.. “It says drastic cuts in government support are a bad idea, and I think that many of us would agree with that,” he said.

Government support for solar should be redefined, eschewing tax credits for a direct subsidy for solar power generation, creating a direct incentive to generate as much solar power as possible, the study suggests.

“It never really finds its way to solar panels on roofs,” he said. “To get the most bang for your buck in terms of climate with solar assets, you should provide a benefit to production instead of capacity creation.”

MIT also downplays the cost effectiveness of residential rooftop solar, saying its current cost per watt is about 80 percent greater than for a utility-scale solar power plant. It doesn’t dismiss rooftop solar entirely, however. The report recommends that more states allow companies such as Solar City to own and operate solar panels on homeowners’ roofs.

Though Stoner said the goal of the study is to show that solar power needs all the help it can get from Washington, the solar industry itself disagrees with the tactics the study suggests.

Solar Energy Industry Association Vice President Ken Johnson said the report “offers an incomplete and flawed picture of solar economics,” especially regarding rooftop solar and tax credits, which have proved to be an incentive to build nearly all the solar installations operating today.

On a larger scale, scrapping state renewable portfolio standards would make more efficient use of utility-scale solar energy developments, even though the standards are effective in many states, Stoner said.

Renewable portfolio standards are requirements that states impose upon major utilities often mandating that a certain percentage of their power generation come from renewables. They vary from state to state, and many have none at all, especially Southern states. 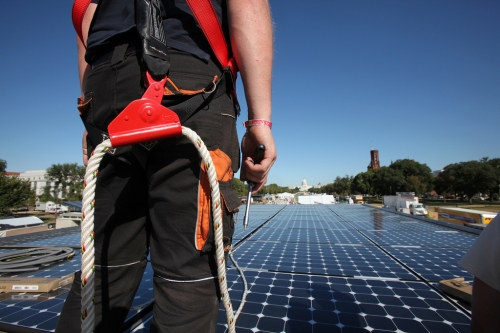 A student looks over solar panels on a house during the 2009 U.S. Department of Energy Solar Decathlon. Credit: Stefano Paltera/flickr

The standards go far to boost solar in some states. For example, solar installations are being built all across North Carolina, partly because its renewable portfolio standard requires utilities to get a certain percentage of their renewable power from solar.

Stoner said those mandates restrict utilities from building solar farms where it may be sunniest.

“Artificially confining it within the borders of a state makes solar power more expensive, he said.

But that may be based on an outdated assumption about the ability of solar panels to generate electricity, Rogers said.

It was previously thought that fairly cloudy regions such as New England could not produce as much solar power as southern states, but recent research suggests that solar power generation capabilities of New England and Florida aren’t very different if solar panels are oriented optimally to take the most advantage of seasonal sunlight and temperatures, he said.

“Turns out we have a resource a whole lot more widespread than (the study) would lead one to believe,” Rogers said. “You want to be setting the record straight, not perpetuating myths.”