When it comes to getting a job in the booming solar power industry, there may be little need to worry about diplomas or degrees.

“Companies are not interested in education; they’re looking for experience,” Andrea Luecke, executive director of the Solar Foundation, said Monday, speaking at a news conference in Washington, D.C., announcing the results of the group’s National Solar Jobs Census. 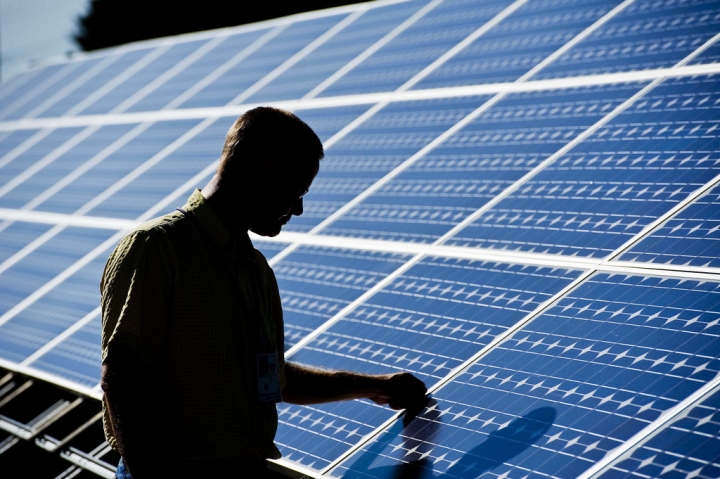 A worker inspects a solar panel. Installers are in high demand in the solar power industry. Credit: Sandia Labs/flickr

Installing solar panels on home rooftops and in giant multi-megawatt utility-scale solar farms is one of the United States’ fastest-growing ways for both residents and power companies to reduce their climate impact in a warming world.

For the solar industry, helping to reduce America’s carbon footprint means inviting those with skilled hands to apply for a job.

The solar sector is growing so quickly as solar panel costs drop that employment in the industry jumped 21.8 percent in 2014, adding 31,000 new jobs in that time for a total of 174,000 solar workers nationwide, Luecke said. Solar employment is expected to jump by another 36,000 workers this year.

By contrast, the wind power industry employed about 50,500 workers in 2013, the latest year for which data is available — a drop from more than 80,000 jobs in 2012 because the wind industry shrank ahead of the expiration of the renewable energy Production Tax Credit, American Wind Energy Association spokesman Evan Vaughan said.

So why does the solar industry value experience over education?

All solar companies need are a few good installers. More than a few, actually, because 56 percent of all the industry’s jobs — roughly 97,000 of them — focus on photovoltaic solar panel installation. 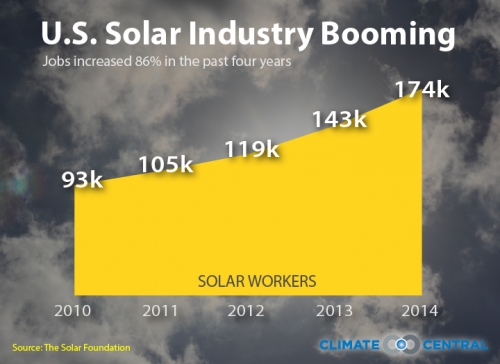 The solar power industry employs a lot of workers despite solar power being only a tiny fraction — less than 1 percent — of total U.S. electric power generation, Amit Ronen, director of the GW Solar Institute at George Washington University, said.

The industry’s growth is based mostly on the falling cost of photovoltaics, he said, adding that since the late 1970s, solar panel costs have fallen 99 percent.

Just in the last five years, the cost of a utility-scale photovoltaic power project has dropped to $1.68 per watt from $3.80 per watt in 2010, translating to about 6 cents per kilowatt hour today, Mike Carr, principal deputy assistant secretary for the Office of Energy Efficiency and Renewable Energy at the U.S. Department of Energy, said.

“The more affordable solar gets, the faster solar will grow,” he added.