Climate scientists don't just rely on computer models and contemporary observations to understand the intimate relationship between CO2 in the atmosphere and environmental conditions on Earth. They also look to the ancient past — and two reports in recent days have made it clear how intimate that relationship is. One chronicles an episode 2.4 billion years in the past, when the entire planet was covered in a layer of ice hundreds of feet thick, oceans and all, while global average temperatures hovered around 40° F below zero.

A massive infusion of heat-trapping CO2 from powerful volcanoes — more CO2 than we're likely to emit in many hundreds of years, to be sure — saved the planet from this so-called Snowball Earth environment. The second report covers an event that happened about 250 million years ago, and this time the effects weren't so benign. Another set of gigantic eruptions poured enough CO2 into the air not only to warm the planet drastically, but also to acidify the oceans so profoundly that some 90 percent of all ocean species died off, followed by two-thirds of land species. It's the worst mass extinction, as far as we know, in history. 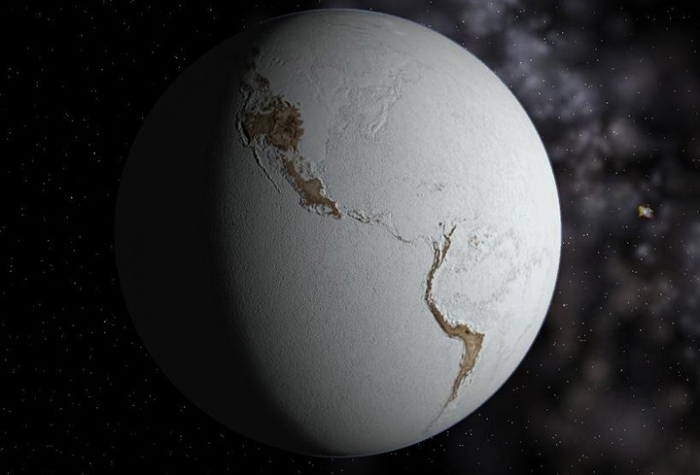 These monumental episodes of climate change, both linked intimately to levels of CO2 in the atmosphere, are a testament to the dramatic effects this greenhouse gas has on the entire planet. So it's no surprise that the smaller amounts we're emitting could have a significant effect as well.

The first of the new papers was published in the Proceedings of the National Academy of Sciences and the second in Science.

During the older episode, continental drift had brought most of the continents near the equator, where CO2, washed out of the atmosphere by rain, reacted chemically with exposed rock and was no longer available to trap heat from the Sun. The global cooling that resulted let sea ice expand until it reached well into what would are now the planet’s temperate zones. At that point, the dazzlingly white surface of the ice would have reflected enough sunlight back into space to accelerate the cooling — just the opposite of the so-called ice-albedo feedback in which diminishing Arctic ice coverage is speeding warming in the region.

Eventually, said Paul Hoffman, an emeritus Harvard geologist who helped develop this concept in the 1990s, “the ice expanding in the Northern and Southern hemispheres would meet at the equator.” The evidence that this actually happened comes largely from glacial deposits, found on several continents, that date back to that time. In the early days, he said, “most geologists were antithetical to this idea. But most now accept it.”

What the new paper adds is a good estimate of where temperatures stood at the time. “Nowadays,” said lead author Daniel Hewartz, a geologist with the University of Göttingen, “you can measure past temperatures by looking at ice cores” — that is, samples of ancient ice drilled from the ice caps in Greenland and Antarctica.

Bubbles trapped in the ice allow scientists to measure past atmospheric levels of CO2, while the ice itself holds clues to temperatures.

Unfortunately, scientists only have ice reaching back about 800,000 years. “For the Snowball Earth period, all the ice is long gone,” Hewartz said. So he and his colleagues looked instead at volcanic rocks from the period that cooled in the presence of water — the same process that’s happening in geysers in Yellowstone National Park and in Iceland today. The rocks incorporated oxygen from that water, which must have come from the ice from the long-vanished glaciers. So by looking at the different weights of oxygen atoms in the rocks, Hewartz and his colleagues teased out where temperature must have stood at the time.

“We suggested this idea back in 2010, 2011, and now they’ve proven what we predicted. This is a very good effort. I wish I had done this analysis myself,” said geologist Ilya Bindeman, of the University of Oregon, who was not involved with the research.

Hoffman was equally enthusiastic. “What’s new here is the ability to quantify surface air temperatures over an ancient ice sheet,” he said. The main drawback is the limited distribution of rocks known to have interacted with glacial meltwater, and uncertainty over their age. “It’s not clear how extensive a geographical picture will emerge,” he said. 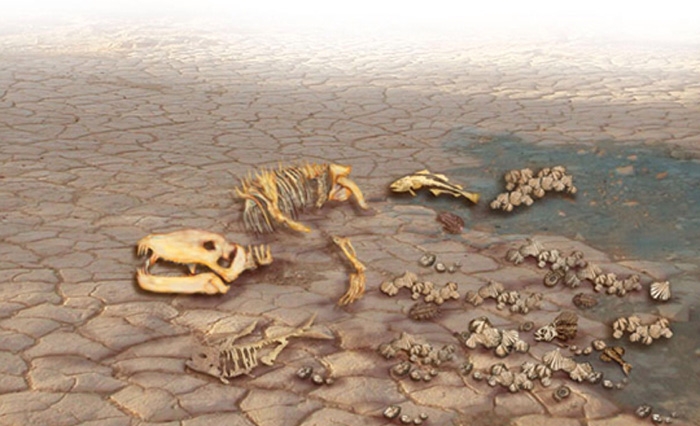 An artist's depiction of the greatest mass extinction known to science: the Permo-Triassic or End-Permian extinction event.
Credit: Lunar and Planetary Institute

One argument against the original Snowball Earth idea is that once the planet froze over, it would be extremely difficult to unfreeze. Clearly, it eventually did, and here again, CO2 almost certainly played a role. The planet has been rocked many times in the past by titanic volcanic eruptions, far more violent and long-lasting than anything humans have ever seen.

Heat-trapping carbon dioxide was among the gases spewed out by these eruptions. Geologists know this because acidification of the oceans is a hallmark of excess CO2 in the atmosphere, and they have evidence that the oceans became strongly acidic at the time snowball phase ended.

With the new paper in Science, they now have evidence that the oceans acidified dramatically about 252 million years ago as well, at just the time that the planet underwent the greatest mass extinction of species known to science. Known as the Permo-Triassic or End-Permian extinction event, it wiped out vast numbers of species, especially in the oceans, and set the evolutionary stage for the rise of the dinosaurs.

“It’s always been thought that a cascade of events happened at this time,” said Rachel Wood, of the University of Edinburgh, a co-author of the Science paper. Scientists know, for example, that the oceans became depleted in oxygen. They know that Earth warmed significantly, in part, perhaps, due to a massive release of the powerful greenhouse gas methane. “Now we’re adding another piece to the jigsaw puzzle, another kill mechanism,” Wood said.

The evidence for acidification comes from ancient limestone, which incorporates the element boron in different ways depending on how acidic conditions were when the rock originally formed. Based on the differences in boron they found in limestone deposits of slightly different ages, Wood and her colleagues scientists posit that the ocean was acidified by carbon dioxide emitted during a known series of eruptions that laid down a vast expanse of lava in what is now Siberia. Acidification during this extinction event, Wood said, “is something that has been long suspected, but never proven until now.”

The acidification took about 10,000 years to play out, the authors write — a period over which carbon emissions per year were probably less than the emissions humans are pumping into the atmosphere today, but which added up over time to help turn the oceans into a toxic acid bath.

This 10,000-year timespan might seem to be good news for those who worry about the phenomenon of ocean acidification today. Not to Wood, however. “What worries me is that we can already see the effects of acidification,” she said, citing the fact that some shellfish are struggling to build their shells. “It looks like the oceans’ response to increased CO2 is going to be complex, and we don’t know where the tipping point for mass extinctions lies.” No one knows, in other words, whether most of the species in that earlier period went extinct at the end of the 10,000 years or much earlier.

Both of these reports on ancient CO2 and climate will need confirmation from future studies, since both involve difficult measurements at the edge of what’s technically possible. But both are entirely consistent with the picture climate scientists have been putting together for more than a century. Carbon dioxide was a key driver of the climate system billions of years ago, and it still is.

The difference is that humans have some control over the CO2 entering the atmosphere today.