Snow Cover May Help Usher in Historic Cold to Northwest

As a Thanksgiving-eve storm — which snarled air and road traffic up and down the East Coast on Wednesday — comes to a close, it’s leaving the country with the largest snowpack for this time of year since at least 2003. That snow cover is likely to play a big role in helping to usher in a wave of potentially historically cold air during the week after Thanksgiving, starting in the Pacific Northwest and eventually encompassing most of the Central U.S., particularly the Upper Plains states and Upper Midwest. 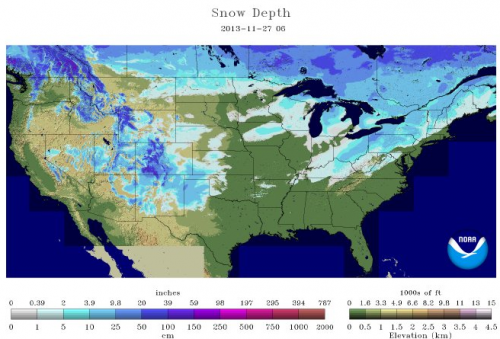 Snow depth in the U.S. as of November 27, based on a NOAA computer model.
Credit: NOAA.

In fact, according to some long-range computer model projections, the entire lower 48 states may be experiencing below-average temperatures by mid-December.

Computer models show an unusual weather pattern may bring record cold temperatures to areas from Seattle to Portland, and eastward to Minneapolis, starting about Dec. 2 and continuing through at least December 12.

The National Weather Service’s Climate Prediction Center has outlined the majority of the lower 48 states as being at risk of significantly below-average temperatures during the next 1 to 2 weeks, with a risk of heavy snows in the mountains of Idaho and Montana.

While the details are subject to change, computer projections from the European model — considered to be the most accurate medium-range forecasting model — show that a major surge of cold, Arctic air will spill into the Northwest starting on about Dec. 1, and then take over a large portion of the country, sending overnight low temperatures well below 0°F, and holding daytime highs well below average as well. The U.S. GFS model shows a similar outcome, lending confidence to the European model's outlook. 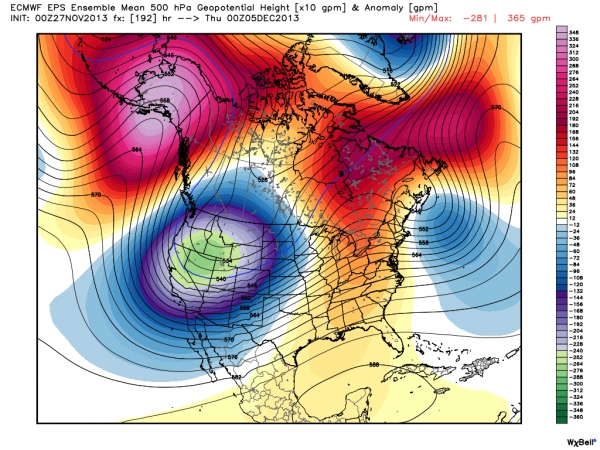 Computer model projection showing a large pool of colder-than-average conditions over the Pacific Northwest, with above-average heights (temperatures) over Alaska, associated with an area of high pressure.
Credit: WeatherBell Analytics.

The broader weather pattern responsible for the likely cold snap features a huge, strong ridge of high pressure across Alaska, which will lead to above-average temperatures there, and a deep dip in the jet stream in Southwest Canada and into the Northwest U.S. That pattern favors cold air outbreaks in the Pacific Northwest and northern tier of the U.S., and relatively mild weather in the eastern U.S. Some research in recent years suggests there may be a connection between such large, “blocking” ridges of high pressure that serve as atmospheric red lights, preventing weather systems from moving through, and climate change. Rapid Arctic climate change, some researchers say, is altering the jet stream in ways that favor these high pressure areas, and it's an area of active research.

As of November 27, about 36 percent of the U.S. had some snow cover, comparable to the 35 percent seen on this date in 2010. That's higher than any other year since such model-based records began in 2003 and more snow is still falling in the Appalachians and near the Great Lakes. The snow cover in the West and Upper Midwest will help make the cold blast especially harsh by reflecting incoming sunlight, and more readily losing daytime heat at night, preventing the Arctic air mass from moderating significantly as it heads east. 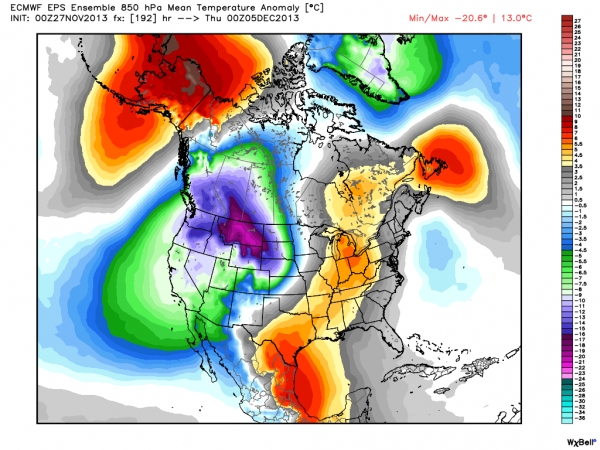 The National Oceanic and Atmospheric Administration’s (NOAA) winter outlook did not identify the Pacific Northwest as being likely to see a cold winter, but it did show a likelihood of below-average temperatures across parts of Idaho, Montana, and North Dakota — states that are already known for their cold and snowy winters.

Conditions could moderate significantly after the December cold snap ends, but there also exists the possibility that a large snow pack will help entrench cold air and lead to more snow events in parts of the country, effectively manufacturing a cold winter. Some experts mentioned that possibility when NOAA’s winter outlook was issued on Nov. 21.