Smaller Glaciers Boost Sea Level as Much as the Giants

As the planet warms under the influence of rising greenhouse gases, and melting ice drives sea level higher, scientists have focused mostly on changes in the vast ice sheets that cover Greenland and Antarctica. If either one melts substantially or slides into the ocean, the results would be catastrophic.

But there’s another ice reserve to worry about: the many thousands of smaller glaciers unconnected to continental-scale ice sheets. They’re melting, too, and a new report in Science shows that between 2003 and 2009, they dumped about 260 billion tons of meltwater into the ocean annually, contributing about 0.7 millimeters per year to sea level rise, just as much as the Greenland and Antarctic ice sheets. 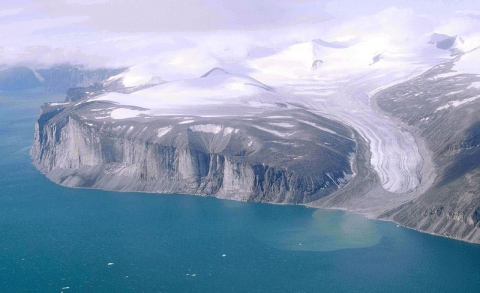 Tongue of a glacier on the northeast coast of Baffin Island, Nunavut, Canada.
Credit: Ansgar Walk via Wikimedia Commons

“These glaciers are typically ignored because they’re so small in comparison,” said lead author Alex Gardner, of Clark University, in an interview,

The new number doesn’t change scientists’ estimates of where sea level is headed by the end of this century — or at least, not yet. “Our study has implications for future projections, but we will not entirely know what those implications are until our new estimates are ingested into the models,” Gardner said.

Most projections currently show an increase of about 3 feet, on average, by 2100, compared with the 8 inches of sea level rise planet has seen since 1900. Given the damage wrought by storm surges from Hurricane Isaac and Hurricane Sandy in 2012 — surges that higher seas made worse than they would have been a century ago — another 3 feet of ocean height could prove nothing short of catastrophic.

There’s still a fair amount of uncertainty in these projections, however. Part of that is because glaciologists don’t fully understand the dynamics of how glaciers that are tied to the great ice sheets will speed up in their flow to the sea as the planet warms. But part of the uncertainty is also due to conflicting estimates of ice loss in smaller glaciers.

Measurements taken by satellites, including GRACE and IceSat, show about half as much ice loss as glaciologists had come up with by going out into the field and taking measurements on the ground. “So we decided to embark on a study that brought together GRACE people, IceSat people, and field people to try and reconcile those differences,” Gardner said.

Among those differences were that various studies covered different areas, over different time periods, and with very different resolution (GRACE, for example, can see average changes in ice mass over large areas; IceSat had much better resolution but poorer global coverage).

By focusing on places where all three sets of observations overlapped in space and time, the 16 scientists who co-authored the study managed to calibrate them all to each other, and in the end, J. Graham Cogley, of Trent University in Canada, told Science, “I think there really was a consensus.”

That consensus, perhaps unsurprisingly, came in between the high estimates of ice loss from ground-based studies and the lowball numbers from the satellites. “We can finally say with strong confidence what the contribution of glaciers to sea level rise actually was between 2003 and 2009,” Gardner said.

And that in turn will help refine future projections.

“If we can’t understand the processes that determine what’s going on today, we can’t say anything meaningful about what lies ahead,” Gardner said. “Now that we’ve been able to bean-count the contributions of glaciers; we’re getting closer to balancing the sea level budget.”

Editor's Note: This article has been updated to indicate that the amount of sea level rise contributed by small glaciers was 0.7 mm/yr, not 7 mm/yr as originally indicated.