As the 10th anniversary of the busiest hurricane season on record approaches, forecasters and government officials are preparing for the start of the 2015 season. But unlike the 2005 season, which saw an unprecedented 28 storms — including one of the worst, Hurricane Katrina — this season is expected to see fewer than the average number of hurricanes. 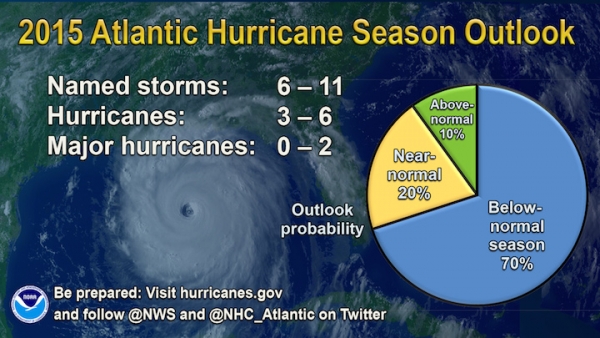 The El Niño flourishing in the tropical Pacific will be the main force keeping a lid on storm development in the Atlantic Ocean basin, National Oceanic and Atmospheric Administration (NOAA) forecasters said Wednesday with the release of their seasonal hurricane outlook.

Officials were quick to point out, however, that even an overall quiet season can see devastating storms. That was clearly illustrated in 1992 by the destruction wrought by Hurricane Andrew during a season that had only seven named storms. Because of that possibility, they emphasized preparation from the individual to the federal level.

“We’re on the doorstep of the Atlantic season and we’ve got to be ready for whatever comes,” NOAA administrator Kathryn Sullivan said during a press conference held in New Orleans, a nod to the upcoming Katrina anniversary.

Hurricane season officially begins on June 1 and lasts until Nov. 30, with the biggest flurry of storm activity generally coming from late August to early October. This season, NOAA forecasters expect to see anywhere from six to 11 tropical storms, of which only three to six are expected to become hurricanes.

It is possible that none of those hurricanes will reach major status — defined as Category 3 or higher on the Saffir-Simpson scale of hurricane strength — though the predicted range is up to two major hurricanes for the season.

Counted in those numbers is Tropical Storm Ana, which formed before the official season in early May, making landfall on the South Carolina coast on May 10. Such early storms aren’t entirely rare, happening every few seasons or so, though recent research suggests that global warming could stretch out the hurricane season by making conditions more conducive to storm formation over a longer period of time.

Most research into the effect of warming on tropical cyclones (the umbrella term for tropical storms, hurricanes and typhoons) has focused on how it might change the frequency or intensity of storms. That work is coalescing around the idea that warming will mean fewer storms overall, but that the ones that do form will skew stronger.

The most robust connection between hurricane and climate change is from sea level rise: As the global oceans absorb more of the excess heat trapped in the atmosphere by accumulating greenhouse gases, they also expand. That means that when storms come ashore, piling up ocean water in front of them, the overall storm surge will be greater in a warmer future.

While hurricanes are measured by the speed of their winds, the “storm surge is always the greater threat in a hurricane,” Sullivan said. “It is the water that kills, not the wind.”

Several recent storms, particularly Hurricane Sandy, have made that threat clear. Sandy brought 9.4 feet of surge to Manhattan's Battery Park, of which about 12 inches was due to sea level rise over the past century. NOAA has worked to make new maps that show specific storm surge watches and warnings, as well as more detailed, zoomable maps that show how high waters could get in a community.

“These will be maps that show you your neighborhood,” Sullivan said.

Whether or not any tropical storm or hurricane that forms during this season will hit the U.S. is something that scientists cannot yet forecast, though they are working on models that would help indicate what regions might be more likely to see a storm. 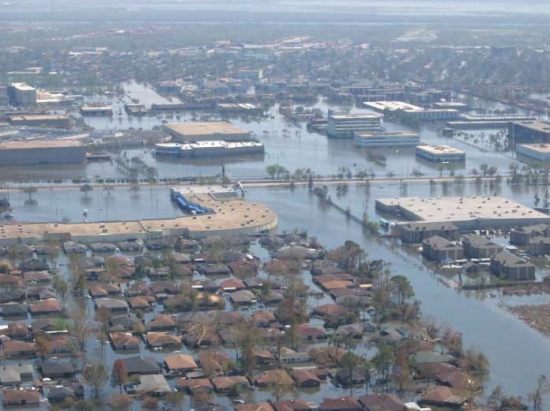 Views of inundated areas of New Orleans following breaking of the levees surrounding the city as the result of storm surge from Hurricane Katrina (2005).
Credit: NOAA.

Storm activity in the main hurricane development region of the Atlantic is likely to be tamped down by the El Niño currently in play. El Niño is a climate phenomenon characterized by warmer-than-normal ocean waters in the central and eastern tropical Pacific. While that warmth helps boost Pacific storm activity, the extra heat transferred to the atmosphere leads to a domino effect that creates unfavorable conditions for storm formation in the Atlantic.

Specifically, it increases wind shear — change in wind speed or direction with altitude — which can strangle a burgeoning storm, and leads to a more stable atmosphere, the opposite of what a tropical cyclone needs.

This El Niño likely also played a role in keeping activity low last season, even though it hadn’t yet fully formed. But it looks to be strengthening now, with a 90 percent chance that it will last through the summer, according to NOAA forecasters.

Near-normal Atlantic Ocean temperatures will be another factor in keeping storm activity low, as warmer waters are better fuel for developing storms.

Officials are worried that the forecast for a below-normal season, along with the nine-year “drought” in major hurricane landfalls (Sandy was the equivalent of a Category 1 hurricane) will lead to complacency on the part of those living in vulnerable coastal areas. The last major hurricane to hit the U.S. was in fact in 2005 when Hurricane Wilma hit southern Florida in October of that year.

FEMA deputy administrator Joe Nimmich warned that people and communities still need to be prepared, even for storms that don’t reach major status, since a tropical storm can still cause disastrous flooding.

“It doesn’t take a hurricane to make a disaster,” he said.

You May Also Like:
Across U.S., Heaviest Downpours On The Rise
U.S., Mexico, Canada to Collaborate on Climate Adaptation
America’s Future Has Wind in its Sails
Monsoon Sets Up ‘Race Against the Clock’ in Nepal