September 2015 was not only the hottest September on record for the globe, but it was warmer than average by a bigger margin than any of the 1,629 months in the records of the National Oceanic and Atmospheric Administration — that’s all the way back to January 1880. 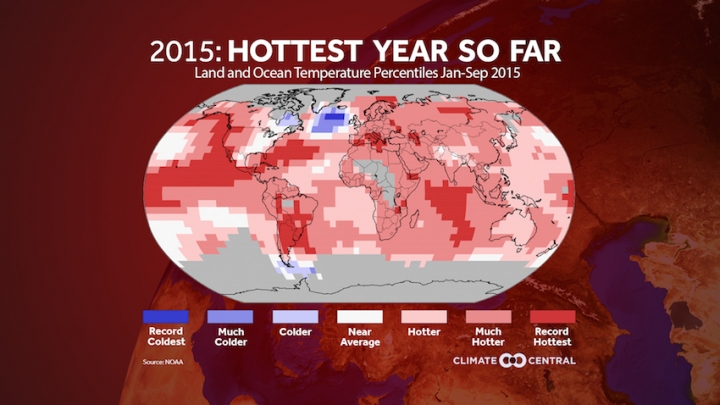 The month continued a year of temperature superlatives that have 2015 virtually a lock to be the warmest year on record, topping the previous record set just last year.

While a major El Niño event is doing some of the heavy lifting in boosting global temperatures this year, such records are also a sign of how much Earth has warmed due to the continual buildup of heat-trapping greenhouses gases in the atmosphere. That background warming tips the dice in favor of such heat records.

This September came in at 1.62°F above the 20th century average of 59°F, NOAA announced Wednesday, making it the warmest September in the agency's 136-year record. (NASA, which assimilates global data slightly differently, ranked it the second warmest September.) That’s the biggest departure from average for any month of any year in the record books.

The previous record holders in that category were February and March of this year, said Jessica Blunden, a climate scientist with ERT, Inc., at NOAA’s National Center for Environmental Information. They were both 0.89°F hotter than average.

And it doesn’t stop there: “Even more noteworthy is that six of the 10 highest temperature departures from average have occurred in 2015,” Blunden said in an email.

That is just one of many statistics that show how remarkably warm 2015 has been. The year is the warmest to-date of any year on record, according to NOAA, coming in at 1.53°F above the 20th century average and surpassing the previous records set in 2010 and 2014 by about 0.2°F. 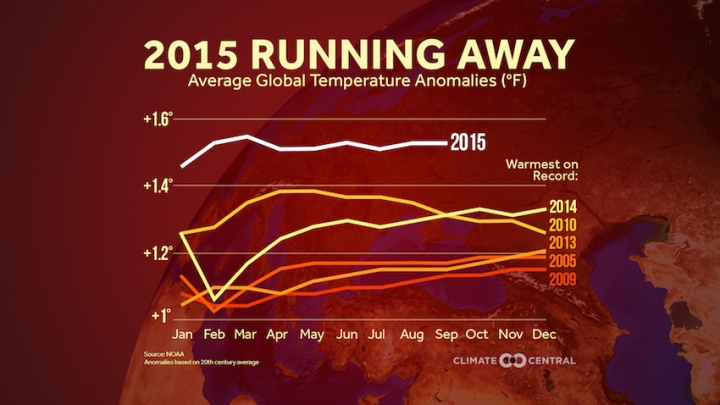 How much 2015 is ahead of other recent warm years.
Click image to enlarge.

While the strong El Niño is helping to drive this global heat, 2015 is currently about 0.3°F warmer over its first nine months than the same period of 1998, the last time there was such a blockbuster El Niño, Blunden said.

“This indicates that there are other factors beyond El Niño that are contributing to the warmth,” she said.

“Generally, the El Niño years keep getting warmer compared to one another,” she added. The same is true of the years where it's cold counterpart, La Niña, are in place. (And La Niña years of recent decades have even been warmer than El Niño years of previous ones.) Those trends are “a clear signal” of the underlying warming trend, she said.

Moving forward, such high temperature records are going to become more common; already, 13 of the 15 warmest years in the books have occurred since 2000 and the last time a global cold record was set was in 1911.

The odds that 2015 will be the warmest year on record have been set at 93 percent by NASA and 97 percent by NOAA, using slightly different methods. Those numbers are based solely on the warmth so far this year and how it compares to the overall annual averages of the total record — essentially, the ability of the last three months of the year to bring down the average are extremely limited.

And unlikely. That’s because of both the El Niño, which forecasters are highly certain will remain strong and in place through winter, and the overall warmth in the global oceans.

“We're also seeing record and near-record ocean surface temperatures in every major ocean basin,” Blunden said. “In particular, we've observed the northeast Pacific ‘blob’ warmth, incredible warmth across the entire Indian Ocean, and record heat emerging in parts of the Atlantic Ocean. So it truly is the global oceans driving our record temperatures.”

You May Also Like:
Climate Matters: Back to the Future of Climate
Study Sees Ecological Risks as Solar Expands
A New Blue Marble Every Day, Courtesy of NASA
El Niño Keeps Antarctic Sea Ice From Another Record Max