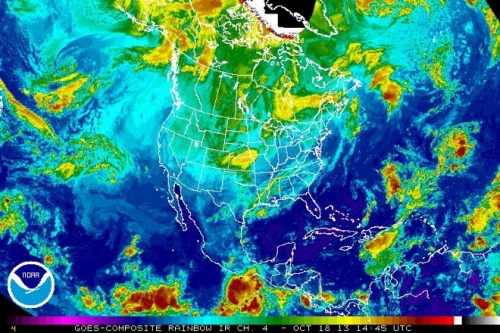 Infrared satellite image of the U.S. taken by one of NOAA's geostationary satellites.
Click image to enlarge. Credit: NOAA.

Before the shutdown, the country was already looking at a likely gap in critical weather satellite coverage starting in about 2016, which experts say will result in less accurate weather forecasts. Prior to the shutdown, officials told Climate Central that a shutdown longer than about 1 to 2 weeks could impact the satellite program’s timeline by halting work being done by government contractors, such as Ball Aerospace, which is building the satellites and their components. A shorter shutdown would have allowed the contractors to keep working using funding left over from fiscal year 2013 appropriations.

“Currently, NOAA is assessing the short and long-term impacts of the government shutdown to the development of, and launch schedules of all the spacecraft in its satellite acquisition portfolio, particularly, GOES-R and JPSS,” NOAA spokesman Scott Smullen told Climate Central in an email, using the acronyms for the next-generation of geostationary and polar-orbiting satellites.

“NOAA’s current suite of operational geostationary and polar-orbiting satellites, which are the backbone of forecasts from NOAA’s National Weather Service, were not impacted by the shutdown,” Smullen said.

During the shutdown, 55 percent of NOAA’s workforce were furloughed, with most of the employees that remained on the job dedicated to operational weather forecasting, rather than satellite procurement.

If the shutdown does delay the development of new satellites, it will increase the likelihood and length of a gap in satellite coverage, and likely boost the overall cost of the program. The risk of a satellite gap is considered high enough and consequential enough to earn “mitigating gaps in satellite data” a spot on the Government Accountability Office’s annual list of the top 30 challenges facing the federal government, also known as its “high-risk list.”

While NOAA is analyzing the ramifications of the shutdown on its satellite programs, one of its divisions will also be working to make up for lost time on a prominent climate report that will help form the basis for the next round of U.N. climate talks, which will take place in Poland in November. 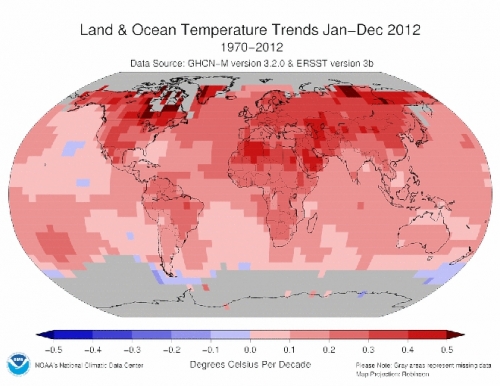 Global surface temperature trends from 1970-2012 from NOAA's State of the Climate in 2012 report.
Click image to enlarge. Credit: NOAA/NCDC.

The report is a status update on the state of the climate system in 2013, and is being prepared for the World Meteorological Organization, which is part of the U.N. system. The report contains a preliminary summary of the climate of 2013, including highlights of major weather and climate events from the year, as well as information on the year-to-date status of various global statistics, such as global surface temperature and sea ice extent.

The task of preparing the report rotates among different countries, with this year being the second year in a row that the U.S. has the assignment. The government shutdown closed the National Climatic Data Center (NCDC) in Asheville, N.C., which is the NOAA agency that is responsible for monitoring the global climate system, and also cut off U.S. citizens and other nations to NCDC data.

“What this means is that because NASA, NOAA, and other global data were not being ingested (during the shutdown), or analysis was not being done during the shutdown, the global numbers may not be as credible,” said Nancy Colleton, president of the nonprofit Institute for Global Environmental Strategies. “It could degrade the integrity of the report,” she said in an email.

“The U.S. may be late in delivering the report. The plan was to have the report out for review by mid-October, so this could impact it (by) as much as two weeks.”

“It is a big deal for NOAA/NCDC to be the lead for a COP-19 statement that the Secretary General reads, so it will mean they may have to work overtime and weekends to get all the analysis done on time,” Colleton said, using the acronym for the U.N. climate talks, which are formally known as Conferences of the Parties to the U.N. Framework Convention on Climate Change.

NOAA maintains that the climate report is still on schedule, despite the lost two weeks of work and lack of data availability during that time.