September an Exclamation Point on String of Hot Months

2016 is the year where abnormal has become the norm when it comes to the global temperature.

New data from NASA shows that yet again, the planet had a record-warm month. September set a record with temperatures 1.6°F (0.91°C) above normal, besting the previous mark set in September 2014. It’s the latest in a run of months — and years — where freakish global warmth has become the norm. 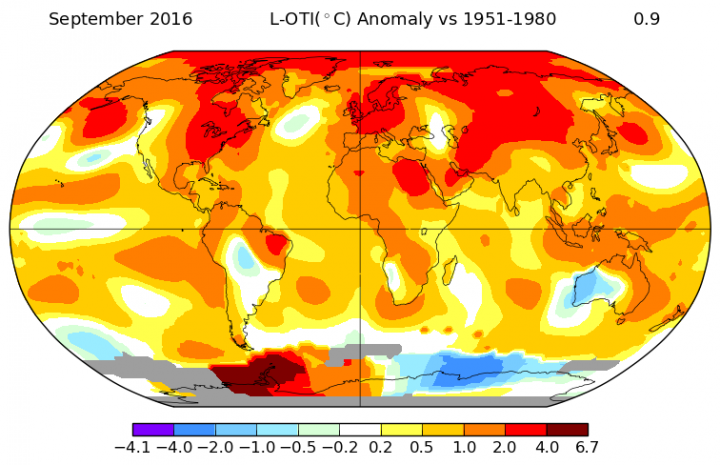 To say there’s never been a stretch like this may sound like stating the obvious, but let’s recap for the heck of it.

The September mark comes a month after the world tied the record for the hottest month ever recorded in August (the month it tied was this July). As early as May, there was a 99 percent chance that 2016 was going to go down as the hottest year on record, besting 2015, which bested 2014, because the planet has been on a heat bender since last year.

With September’s record, the odds crept a little higher still. NASA climate scientist Gavin Schmidt said on Twitter that 2016 “seems locked in” to set a record for hottest year with it likely to end somewhere around 2.25°F (1.25°C) above the late 19th century average.

The global average temperature will stop setting records at some point, but that’s besides the point. The past 12 months has been a long string of exclamation points at the end of a sentence that reads the world has been warming since the the late 19th century due in large part to human carbon pollution.

According to NASA, 11 of the past 12 months have been record warm (for perspective, the last record-cold month was December 1916). The one exception is June, which NASA had previously declared record warm but updated on Monday to “only” third warmest after scientists received new data from Antarctica.

It should be noted that the National Oceanic and Atmospheric Administration, one of the other gold standards for global temperature analysis, says the world has had 16 straight months of record heat (itself a record). It releases its September numbers on Tuesday.

Of those 12 months, seven of them have been more than 1°C above average. Prior to that, no months passed that threshold in 136 years of record keeping.

In addition to the hottest months ever recorded, the recent stretch of heat includes February, which was the most abnormally warm month on record. Temperatures were 2.4°F (1.34°C) above normal. That’s the closest the world has come to the 1.5°C threshold, which is viewed as an important threshold for the continued existence of a number of small island states.