February was the second hottest on record for the planet, trailing only last year’s scorching February — a clear mark of how much the Earth has warmed from the accumulation of heat-trapping greenhouse gases in the atmosphere. 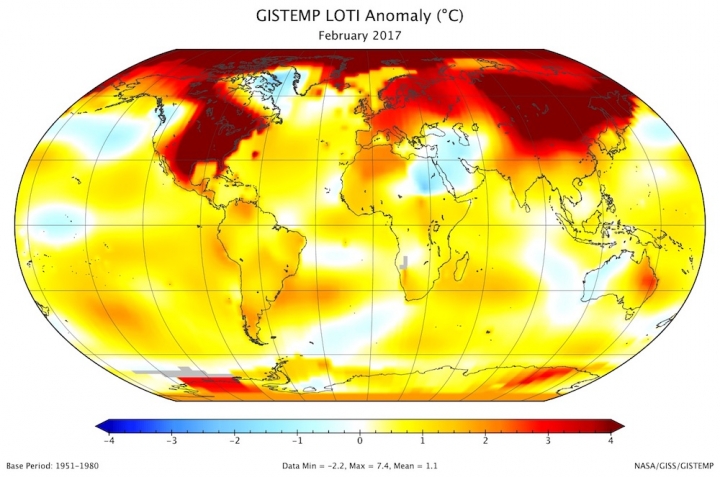 How temperatures around the world compared to normal during February 2017.
Click image to enlarge. Credit: NASA

One of the clear hotspots on the globe was once again the Arctic, as was the case in January and last year, which was the hottest year on record. Temperatures there were about 7°F (4°C) above average during February. Those high temperatures have kept Arctic sea ice to record low levels; the Arctic looks to see a record low winter maximum sea ice area for the third year in a row.

The continual monthly heat records set in 2016 were fueled partly by a strong El Niño event, which tends to warm global temperatures, though the bulk of the excess heat is due to the human-caused warming of the planet. The second-place finish of this February makes that contribution clearer, as El Niño dissipated last summer and was even followed by a mild La Niña, which tends to cool global temperatures.

The slightly lower temperatures in January and February of this year “is in part due to the difference in El Niño,” Gavin Schmidt, director of NASA’s Goddard Institute for Space Studies, said in an email. “But the overall trends are indeed because the planet is warming. As we said last year, the El Niño impact on the annual means is relatively small.”

In fact, even La Niña years now are warmer than El Niño years of the past, because of the boost provided by global warming. 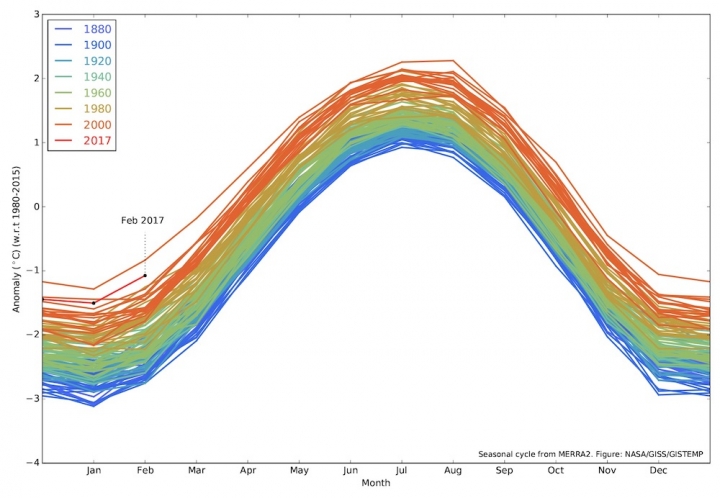 Global temperatures have steadily risen since the late 19th century, with 2016 ranking as the hottest year in the last 137 years. February 2017 ranks as the second hottest on record, behind only February 2016.
Click image to enlarge. Credit: NASA

According to the National Oceanic and Atmospheric Administration, 16 of the 17 hottest years on record have occurred in the 21st century (the exception being the strong El Niño year of 1998). The five warmest years have all occurred since 2010, according to NOAA, and every year of the past 40 years has been warmer than the 20th century average. (While NOAA’s temperatures can vary slightly from NASA’s because of the different methods the agencies use for processing data, their numbers are generally very close and both show the same clear warming trend.)

While 2017 is unlikely to break 2016’s record, it is still likely to rank among the hottest years, according to U.K. Met Office projections.