Risk of Sandy-Level Flood in NYC Has Doubled Since 1950

As the anniversary of Hurricane Sandy approaches, a new study points to the rapidly escalating risk of Sandy-magnitude flooding events in the New York City area. The study, published Thursday in the Bulletin of the American Meteorological Society, found that sea level rise has already nearly doubled the annual probability of a Sandy-level flood in the New York City region since 1950. 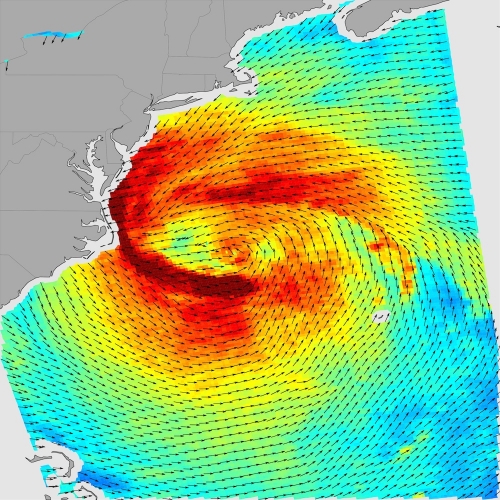 NASA visualization of the wind field associated with Hurricane Sandy as it approached the Mid-Atlantic coast on Oct. 28, 2012. Wind speeds above 40 mph are yellow; above 50 mph are orange; and above 60 mph are dark red.
Click image to enlarge. Credit: NASA.

Depending on how much sea levels increase by the end of the century, the study said Sandy-like flooding could occur once every few decades in Manhattan, and on the order of once a year in parts of New Jersey and coastal Connecticut.

By raising the water level, sea level rise provides storms with a higher launching pad for storm surges, which are bulges of water caused by a storm's winds, forward motion, and atmospheric pressure, to ride on top of. As sea level rises it becomes possible for weaker storms, such as common nor’easters, to cause Sandy-magnitude flooding. That means that coastal communities may have to rethink their flood protection measures and long-term coastal development policies, as New York is already doing. Hurricane Sandy flooded each of the subway tunnels connecting Manhattan to Queens and Brooklyn, cut off power to lower Manhattan, and transformed coastal towns like Mantaloking, N.J., and Long Beach, N.Y.

“Today’s coastal infrastructure . . . is steadily losing ground due to relative sea level rise,” said study co-author William Sweet, an oceanographer at the National Oceanic and Atmospheric Administration, during a conference call with reporters.

Because of the storm’s massive size and extremely unusual westward movement, Hurricane Sandy drove a massive storm surge into the northern Mid-Atlantic and southern New England coastlines, causing more than $60 billion in damage. The storm broke 16 records for the highest storm tide, including at The Battery in lower Manhattan. The storm tide combines both the storm surge and the tide level, and at many locations, Sandy's surge coincided with high tide.

“Sandy’s rare onshore impact angle produced a massive storm surge” of about 2.7 meters, or about 9 feet, above high tide at The Battery on the southern tip of Manhattan, Sweet said.

While a flood on the magnitude of Hurricane Sandy increases as sea level rises, it's still an exceedingly rare event. One can be expected to occur at The Battery every 1,570 years. That means that each year, New Yorkers face about a 0.064 percent chance of seeing a similar flood, according to Sweet. In 1950, when the sea level was lower, the return period for a Sandy-type flood was much longer at 2,330 years.

The study projects a huge increase in the annual risk of Sandy-type flooding in areas hit hard by the storm. While the probability of a Sandy-level flood in New York City itself has risen by about 50 percent since 1950, in impacted areas outside the city including the New Jersey shoreline, the probability has more than tripled, Sweet said. If sea level rises significantly, but below worst-case scenarios, then at The Battery and in Sandy Hook, N.J., both of which set records during Sandy for the highest storm tide, Sandy-magnitude floods could become about 50- and 20-year events, respectively.

Under the worst-case sea level rise scenario, though, that return period would decline to less than 2 years at each of these locations. In such a scenario, sea level would rise by 2 meters, or 6.6 feet, by 2100, which is a higher amount than what is called for in most sea level rise projections.

Before (left) and after images of the amusement park at Seaside Heights, N.J., which was heavily damaged by Hurricane Sandy.
Click image to enlarge. Credit: NOAA.

With 1.2 meters, or about 4 feet, of sea level rise by 2100, the study projects that Sandy-level flooding would occur at intervals of every few decades at The Battery and Sandy Hook, and annually at all other tide gauge stations studied, from Virginia northward to Newport, Rhode Island.

“Coastal communities are facing a looming sea level rise crisis, one that will manifest itself as (an) increased frequency of Sandy-like inundation disasters in the coming decades along the Mid-Atlantic and elsewhere,” the study said.

A forthcoming report from the U.N. Intergovernmental Panel on Climate Change is expected to project that global average sea level may rise by an average of up to 2 feet by 2100, depending on future greenhouse gas emissions and other factors. However, locally higher amounts of sea level rise are likely, and other studies have shown that the Mid-Atlantic and Northeast can expect particularly steep increases in sea level compared to other parts of the U.S.

Melting ice sheets and mountain glaciers are now the dominant contributor to global sea level rise, but considerable uncertainties exist regarding how quickly the vast frozen expanses of Greenland and Antarctica may melt as temperatures continue to increase.

Editor's Note: This story has been edited to indicate that the probability of a Sandy-level flooding event in New York City itself has increased by about 50 percent since 1950, while areas close to to the city have seen a much steeper increase in probability. It has also been edited to correct the figure for the annual risk of a Sandy-level flood in New York, expressed as a percentage, which is 0.064 percent, not 0.0064 percent as originally indicated.