EAST PALO ALTO, CALIFORNIA — Thirty-year-old Gustavo Leal remembers the floodwaters reaching the doorstep of his family home in East Palo Alto. “It was bad enough that you couldn’t get out of your driveway,” he said.

Next time the floodwaters could swamp the entire house. That's the findings of a new analysis from New America Media and Climate Central, a research and journalism organization.

The analysis found statewide at least 145,000 people could be under water in the next 30 years. Northern California residents, many from low-income and minority communities, will bear the brunt of sea level rise.

San Mateo County will be the hardest hit. Leal's hometown of East Palo Alto could be the most vulnerable.

In February 1998, an El Niño storm brought high-speed winds combined with abnormally high sea levels that wreaked havoc in the Bay Area. El Niño is an abnormal weather pattern that brings severe storms to the western Pacific every few years.

As a result of the heavy rains, many low-lying areas, including East Palo Alto, were swamped. Records of tidal gauges in the area show that waters reached two and half feet above high tide during that El Niño storm, which damaged about 1,700 properties in East Palo Alto and neighboring cities.

Record floods like the one Leal experienced will become more frequent and severe with rising sea levels, according to Climate Central’s analysis, which uses federal data, historic flood statistics and sea rise projections to map flooding in 11 U.S. coastal states.

Statewide, $36.5 billion in property and 145,000 people are located on land less than three feet above the high tide line, with 90 percent in the San Francisco Bay and Delta. Climate Central’s analysis assumes that protective structures such as levees are intact and work properly, presenting a best-case scenario.

More than half of the total people affected are in San Mateo County alone, home to an international airport, major corporations including Facebook, Oracle and Genetech, and Stanford University.

Residents in that county could experience floods reaching three feet above the high tide line every year by mid-century, according to the analysis.

Driven by global warming, sea levels have been rising because of the expansion of the water as it heats up and the unprecedented thawing of the massive Greenland and Antarctic ice sheets. Sea level is expected to rise by one foot by mid-century and about three feet by 2100.

“It’s not just gradual sea level rise [that’s a problem],” said Jeremy Lowe, a scientist who studies estuaries and wetlands with ESA. “It’s when we have a high tide and a storm and big waves in the Bay. That’s when we are going to have flooding and those events are going to be more frequent and they are going to affect us sooner.”

San Mateo County is ground zero for sea level rise impacts. More than 90,000 people and $21 billion in property are at risk of flooding. More than half of the people affected are from immigrant and minority communities, mirroring an important fact about sea rise in the Bay Area: it affects more people of color here than whites.

According to an analysis by New America Media and Investigative Reporters and Editors (IRE) of census data and projected sea rise data by the U.S. Geological Survey, about 60 percent of about 250,000 Bay Area residents at risk of a flood by mid-century are from ethnic communities. Climate Central’s analysis found similar results. NAM and IRE’s analysis doesn’t account for protective structures such as levees, so the estimate of the number of people affected by mid-century is on the high end.

Juan Luis del Hoyo, 25, grew up in East Palo Alto and remembers that during the 1998 El Niño storm, he had to evacuate because his middle school was flooded. He now rents a house just eight blocks from the creek that flooded during that big storm.

“We wouldn't want our stuff to get messed up by the water,” he said.

But as a renter, del Hoyo is more vulnerable in a flood disaster than a homeowner who has flood insurance.

Because they are located in a federally-designated (FEMA) flood zone, homeowners with a federally-backed mortgage here would be required to purchase flood insurance. That would make them eligible for federal disaster relief in case of a flood.

“[When] flooding [happens] in a community, the first line of defense is insurance, [which can help the homeowner] recoup and recover from that disaster,” said FEMA spokesperson Olivia Humilde.

San Mateo County has the highest number of “high social vulnerability” residents impacted by flooding in the nine Bay Area counties. (The social vulnerability index takes into account things like income level, language barriers, race/ethnicity and age, and is used by disaster planners to direct resources during an emergency.) The bulk of the county’s most vulnerable population is in East Palo Alto.

City Manager Magda Gonzalez said the community of 30,000 has an unemployment rate that is about triple that of the county (5 percent) and the median income in the area is about half that of the county. As a comparison, neighboring Palo Alto has a median household income of about $122,400, while East Palo Alto’s is just under $48,000, according to census figures. 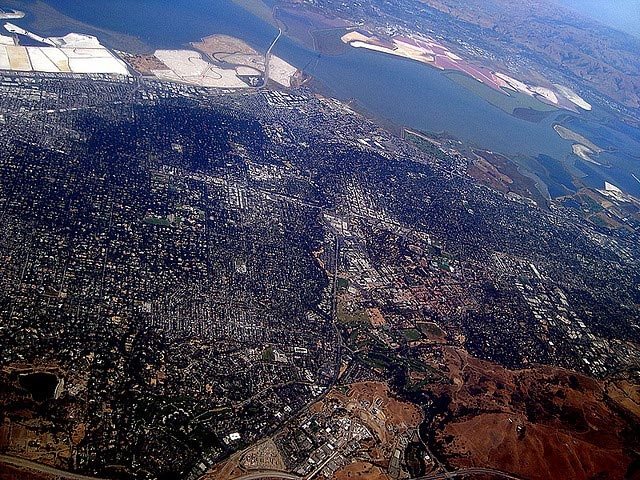 “Most of the people here are low-income… they provide a lot of the service jobs for Silicon Valley… so they are not making the high salaries that the high tech industry is making,” she said. “Yes, [sea level rise] is definitely going to impact our community. This is an environmental justice issue.”

The foreclosure crisis in 2007 had a significant impact on the community, Gonzalez says.

“Most cities get their money from property taxes and sales taxes,” she said. “We were impacted … about one third of the community went into foreclosure during the housing bust … so property values went down significantly, which means property taxes then go down and money doesn’t go into city coffers.”

This tax base in important, Gonzalez says, because it helps to fund public works projects, including improvements to levees, that could better protect the city and its neighbors — Palo Alto and Menlo Park — from flooding at nearby San Francisquito Creek.

The San Francisquito Creek’s headwaters originate in the Santa Cruz Mountains, and waters winds roughly 12 miles through parts of Palo Alto and Menlo Park before exiting into the Bay. During a big storm, the creek catches all the storm water and flows through East Palo Alto — the bottom of the creek — before draining to the Bay.

In a big storm, like the El Niño event in 1998, creek waters in East Palo Alto often swell to the top of the channel.

Len Materman, executive director of the San Franciquito Creek Joint Powers Authority, says residents in East Palo Alto and neighboring cities are doubly exposed to flooding — on the creek side and Bay side.

“Forty percent of properties in the creek flood plain are in the bay flood plain,” he said, noting that sea level rise will make flooding worse. 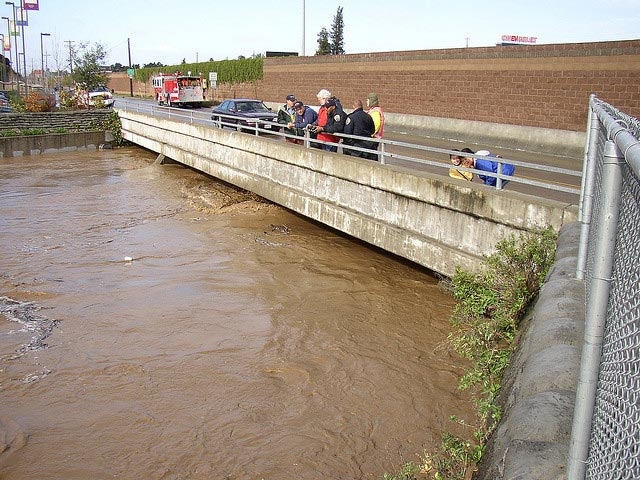 “When there is a big storm event, a lot of water is coming down the channel,” he said. “If it is concurrent with high tide, that significantly increases the amount of water in the channel in East Palo Alto and increases flooding. With sea level rise that is going to be made worse.”

Materman says the new levee will be able to protect against a 100 year flood – which has a one percent chance of occurring each year — and 26 inches of sea rise.

“The National Research Council had three different scenarios: aggressive, moderate and smallest scenario,” he said. “We chose the most aggressive. In 50 years, 26 inches [of sea rise] is pretty large for a 50-year number. I feel comfortable that we’re on the right track.”

Materman estimates the new levee project will cost $37 million, with a “hefty contingency” built in, he says, and could be built in two years. The proposed project faces some hurdles, including a lengthy process to obtain required permits.

On the Bay side, Materman says, the Joint Powers Authority proposes to add 15 acres of tidal wetlands to buffer against the rising seas and storm surges.

“The gradual slope of a marsh can reduce the energy of a wave,” he said, “The levees we build can be lower and cost less. It’s a great multi-benefit opportunity.”

Where San Francisquito Creek waters flow into the Bay, the view used to be obscured by two industrial towers of a hazardous waste plant.

East Palo Alto resident Annie Loya called it an ”eyesore.” But it was more than that — it was a health threat to the community. The plant, then owned by Romic Environmental Technology, spewed toxic chemicals into the air and water.

The community waged a long-fought battle to close it down, which the state did in 2007, finding it could not operate safely.

Loya credits the plant’s closure to the organizing work of Youth United for Community Action (YUCA), an environmental justice organization based in East Palo Alto. She joined the group when she was 13, and now, at 30, heads it.

She says the community’s work to close down the plant, which occupied nine acres of bay-front property, paved the way for the transformation of the area into a patchwork of restored wetlands that now attract wildlife, including the endangered California clapper rail.

Cooley Landing, a peninsula jutting into the Bay that used to house a garbage dump, was cleaned up, restored, and now boasts a park. A wildlife education center is slated to be constructed there.

“I think the towers of the [Romic] facility was the last piece that needed to be removed to really, fully restore the wetland,” Loya said. “Part of it was … that we could re-imagine the city. Part of this area could become a vital place and build a tax base for the city … so then we could be able to re-imagine the entrance into Cooley Landing now that the towers were gone.”

Although YUCA’s efforts paved the way for tidal marshes — which other cities are now adopting to gird against higher sea levels, bigger waves and storm surges — Loya says the group has only in the last year started to talk about climate impacts, including sea level rise.

“All these Bay lands would also be submerged, which is perhaps why people don’t see [sea rise] as a huge concern,” she said. “We don’t know how quickly that could happen. So, how much time would the community and the city have to develop its preventative measures?”

This story is part of a New America Media-led collaborative reporting project (”Surging Seas Coming to Your Neighborhood Soon?”) on the local impacts of sea level rise involving six Bay Area ethnic and community media reporters. The project was conducted in partnership with Climate Central, Stamen Design and Investigative Reporters and Editors, and funded by the S.D. Bechtel, Jr. Foundation, Mize Family Foundation, and the Fund for Investigative Journalism.