Along the mid-Atlantic coast, where waters are rising quickly, marshes are on the march, consuming forestland, farms and yards. “Habitats are changing fast here,” said Matt Whitbeck, a biologist at the Blackwater National Wildlife Refuge in Maryland, where dead trees still jut from young marshes.

Newly published modeling shows that a looming acceleration in sea level rise could further accelerate the spread of marshes worldwide. 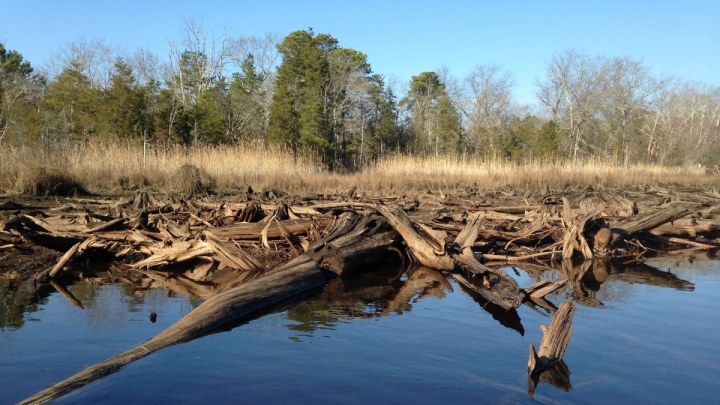 Coastal planners value marshes for their ability to hold back floods. When conditions are right, they cling to shifting coastlines like protective scabs, growing taller as tides get higher, slowing waves, erosion and floods.

“For a moderate acceleration in sea-level rise, the marshes could actually get bigger, because they’re going to migrate into uplands at a faster rate,” said Matt Kirwan, a Virginia Institute of Marine Science researcher who led the study, published in Geophysical Research Letters.

Ghost forests of dead trees are already prominent at East Coast sites like Blackwater, which is home to bald eagles and wetland species, and where several thousand acres of forest has died since the 1930s and given way to marshland. The eerie ecosystems are particularly common in New Jersey.

Following a half foot rise last century, heat-trapping pollution is now causing seas to rise more than an inch per decade. That rate is poised to continue increasing. Anywhere between two and six feet of sea level rise is possible this century. The severity of future flooding will depend partly on whether a new United Nations climate treaty succeeds in abruptly slowing warming from fuel burning, deforestation and meat production.

Kirwan studies marshes and he wanted to know more about how the acceleration of sea level rise would affect them. He worked with colleagues to develop models that investigated how marsh erosion, soil accumulation and upland marsh expansion are affected by sea level rise and local topography.

The findings added to evidence that marshes can offer economical solutions to flooding in the backcountry as sea levels change — and that those solutions become expensive near cities.

The researchers reported in their paper that marsh loss is “nearly inevitable” where human structures or steep hills block the upland migration of the marsh ecosystem. But where there are no such barriers, increases in marsh expansion upland are “much more sensitive” to a quickening of sea level rise than rates of marsh loss at the water’s edge.

The modeling showed that marshes can drown once sea level rise reaches rapid rates — rates that are unlikely to be experienced in the near future. Their expansion also depends on sufficient mud swirling in the water, which helps them accumulate soil needed to grow vertically as seas rise.

Sea-level rise has been particularly rapid in the mid-Atlantic, where Kirwan is based, with human and natural forces combining to raise high tide marks at least half a foot from 2002 to 2014. High tide flooding is becoming routine in Annapolis and in other cities along the Eastern seaboard, heralding a looming global crisis.

“What drove our research were all these observations of dead trees along the edges of marshes up and down the Atlantic coast,” Kirwan said. As salty waters rise, shoreline trees die and marsh plants colonize soggy land between the trunks. Mud, branches and muck combine into rich wetland soil, fostering plants and wildlife. “It’s clear that the marsh is migrating upslope.”

Wetland restoration projects are starting to become popular around the world. San Francisco Bay Area voters are considering introducing a parcel tax to help fund marsh restorations. A recent worldwide study showed it’s two to five times cheaper to grow a marsh to shield against the eroding power of waves than to build a barrier from rocks or concrete. Marshes also support fisheries.

EPA surveys have shown just half of America’s remaining wetlands are in good condition. Kirwan’s modeling suggests that providing ample space near a tattered marsh may be the best way to breathe back life into it. 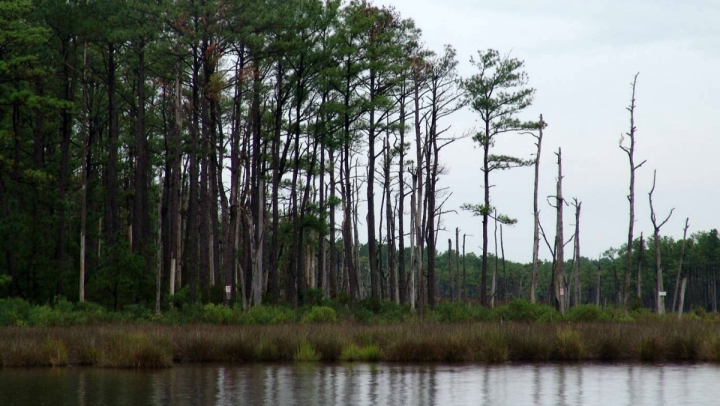 “Our models indicate that management efforts don’t have to focus on preserving the marsh that’s already there,” Kirwan said. “Instead, they should consider where the marshes are going to be in the future.”

In areas where land is expensive, already built over or protected by seawalls, that could be prohibitively expensive, causing city marshes to drown as seas rise.

“An important precondition is that there is a gently sloping transition to natural uplands — and no man-made barriers,” Stijn Temmerman, a University Antwerp professor who studies ecosystem management.

When seawalls, houses and roads stand in the way of marshes’ natural inland migrations, the marshes can disappear. Temmerman says that’s a major threat in Europe, “where there’s a long tradition of building sea walls behind marshes.”

Some American coastal neighborhoods could adapt to regular flooding, such as with elevated buildings or floodable ground floors. But many view the ongoing abandonment of targeted waterfront neighborhoods as inevitable. The new findings show successful coastal retreat may also require abandoning land that’s set back from a waterfront, allowing marshes to migrate into it.

High costs of land, however, mean it’s “very unlikely that land will be made available for wetland migration” along populous stretches of coastline, according to Kristina Hill, an urban ecology and design researcher at the University of California, Berkeley.

“I think wetland migration by natural processes will certainly occur, but mostly in rural or abandoned suburban areas,” Hill said. “The trick will be removing underground and surface systems that will interfere with wetland migration, like underground pipes, contaminated soils, basement foundations and roadways.”

Even in lightly populated areas, American coastlines tend to run parallel with train tracks and highways. They can block the migration of a marsh, and, politically, they can be “almost impossible to relocate,” Hill said. “They’ll form hard edges for wetland migration unless they’re elevated on causeways.”

Despite the prominence of ghost forests on the East Coast, marsh migration is a global phenomenon. Richard Stumpf, a NOAA scientist, documented a spectacular marsh migration nearly 1,000 miles from Blackwater. He worked with the U.S. Geological Survey to analyze landscape changes in the little-populated areas of the eastern Gulf of Mexico.

About 10,000 acres of marshes eroded away or drowned along a section of Florida coastline during 120 years, the scientists reported earlier this year in the journal Estuaries and Coasts. Meanwhile, twice that acreage of forest died and turned into marshland, with further conversions underway.

“We have an understanding that marsh migration can be as important as marsh erosion,” Stumpf said. “This paper is a good example of developing a model to test our understanding.”

Back at Blackwater, Whitbeck and his colleagues have been trying to protect new marshlands from invasive grasses and from marsh-destroying invasive rodents called nutria. Even as they do that, they’re trying to clear a path for future marsh expansion as seas continue to rise — something that’s easier to do in a wildlife refuge than in an urban setting.

“We’re protecting lands within these marsh migration corridors so we can have places for the marshes to migrate into the future,” Whitbeck said. “It’s a very proactive approach.”

You May Also Like:
Florida Dredging Would Cut Path Across Corals in ‘Crisis’
Ocean Acidification Making It Harder For Fish to Breathe
CO2 Nears Peak: Are We Permanently Above 400 PPM?