The acceleration of the rate of sea level rise over the past couple decades is even higher than scientists had thought, according to a new study that uses a novel method to estimate the global rise of the oceans. 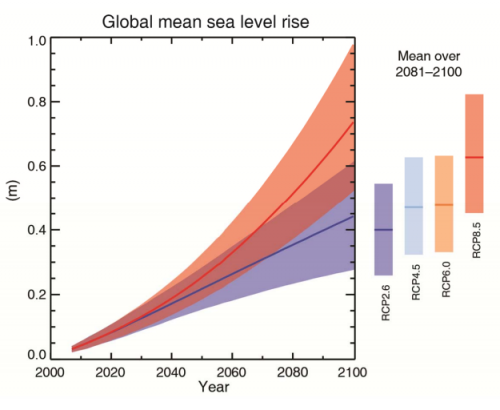 The reason? The rate of rise across the 20th century has actually been overestimated — by as much as 30 percent — meaning there’s been a bigger jump in sea level rise rates from the beginning of the 1900s to now than previously thought.

“The acceleration over the 20th century is larger than we thought, and that’s a problem,” particularly for coastal communities, study author Carling Hay, a postdoctoral fellow at Harvard and Rutgers University, said.

While other sea level rise researchers are cautious about the new findings, detailed in the Jan. 15 issue of the journal Nature, they say the study is important, and, if validated, could solve some lingering mismatches in sea level rise estimates. Its impact on projections of future sea level rise, currently estimated at between 10 and 32 inches by 2100, remain uncertain.

Sea level rise is a direct consequence of the warming of the planet from the accumulation of carbon dioxide and other greenhouse gases in the atmosphere. As those gases trap extra heat, the oceans mop up some of the excess; as water warms, it expands, meaning that as the oceans heat up, they rise. Warming also melts glacial ice currently trapped on land, adding to the ocean’s burden. Since the beginning of the 20th century, average global sea level has risen by 8 inches.

Estimates of sea level rise, particularly before about 1990, when satellites came into service, have relied on the records of tide gauges scattered unevenly around the world. From those records, scientists have estimated rates of 1.6 to 1.9 millimeters per year of global sea level rise for the 20th century.

For the past couple of decades, when satellites have been able to take more accurate measurements, the rate is estimated at about 3 millimeters per year. (Part of the reason for the acceleration is that it takes more heat to raise the temperature of water than air and more time is needed to transport that heat into the deep ocean.)

Hay didn’t actually set out to challenge these established estimates of sea level rise. She and her team were hoping to find the telltale signatures of glacier melt in tide gauge records, using statistical methods that hadn’t been applied to the issue of sea level rise before. They figured out that they could use those same methods to estimate global sea level rise. When they tried it, they realized “that we didn’t get the same thing” as the established estimates, Hay said.

“We were definitely surprised,” Hay said. Thinking perhaps she had made an error, “I spent a while looking for bugs in my code.”

But when the team tried a different method, they got the same numbers.

Those lower estimates of sea level rise up to 1990 also happened to solve a seeming problem with previous estimates. When scientists tallied the contributions to sea level rise from glacial melt, thermal expansion and other sources, they didn’t match the global average rise. But Hay’s estimates did match the tally.

The team’s new estimates for the period since 1990 also matched those from the more accurate satellite records.

If Hay and her colleagues are right, what that means is that combining their new lower estimate of sea level rise until 1990 with the higher rate since then gives an overall faster acceleration of the rate of that rise since the early 20th century.

“I think this is an important paper by top quality scientists. At this stage, I cannot judge whether or not the new results are an improvement,” John Church, an oceanographer with the Commonwealth Scientific and Industrial Research Organisation in Australia, said. Church, who has published estimates of sea level rise, was not involved with the new study.

Hays’ next steps are to figure out what these new estimates mean for projections of future sea level rise. Church doesn’t expect the results to have a big impact on projections in the Intergovernmental Panel on Climate Change reports, because they already include a wide range. They could, however, help better understand at least the contribution from thermal expansion of water, Hay said.

The big question is, of course, whether or not the acceleration she found will continue in the future.

“That’s a big uncertainty,” she said.