When Antarctica grabbed headlines last year because of record-high sea ice levels circling the southernmost continent, it created confusion. Its increase was so at odds with the trend of dwindling sea ice, particularly in the Arctic, that it prompted those skeptical of the science of climate change to suggest it meant ocean ice is not disappearing. 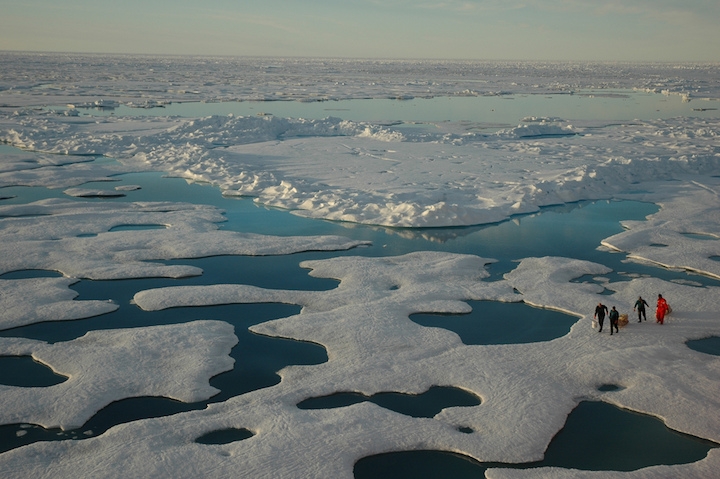 Sea ice and meltwater ponds in the Arctic, as seen from the USCG Icebreaker Healy.
Credit: Jeremy Potter NOAA/OAR/OER

But research shows that ice lost in the Arctic dwarfs any gains around Antarctica, as a recent study in the Journal of Climate clearly illustrates by combining satellite records of the two areas to produce a clear overall downward trend in sea ice.

“I hope that these results will make it clear that, globally, the Earth has lost sea ice over the past several decades, despite the Antarctic gains,” study author Claire Parkinson, a sea ice researcher at NASA’s Goddard Space Flight Center in Maryland, wrote in an email.

The inexorable decline of sea ice in the Arctic Ocean has been clear from the beginning of the satellite record in the late 1970s. Warming temperatures, fueled largely by climate change, have caused the ice to melt, creating patches of dark ocean water that absorb more of the sun’s rays and causing further warming and melting in a well-understood cycle. While melting sea ice doesn’t raise global sea levels like land ice does, it could have major impacts on regional and global weather and climate patterns, as well as sea life and wildlife.

The gains in Antarctica, in contrast, have emerged in the past few years and the causes aren’t well understood. Scientists are investigating, suspecting the leading culprits are changes to winds and ocean waters around the South Pole.

While scientists understand the Arctic loss far outweighs the Antarctic gains, the message hasn’t always been clear to the public, Parkinson said, which prompted her to do the study to enter the global trend into the official research record.

She used satellite records of the extent of sea ice at both poles and combined them to get the global trend, which mirrors the decline of the Arctic. The overall sea ice loss for the planet is about 13,500 square miles per year from 1979 to 2013. 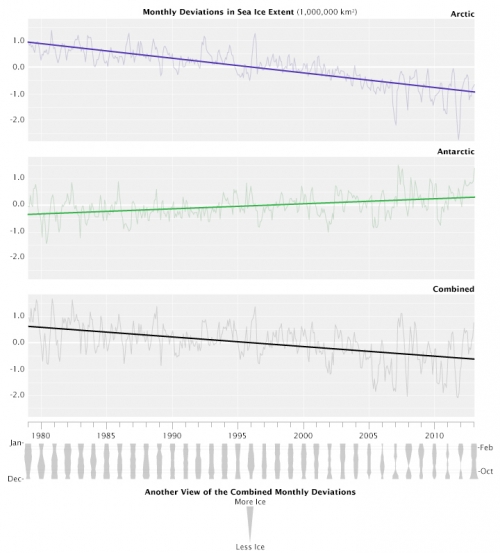 That decline was also seen in every calendar month, with the largest decline — of about 26,000 square miles per year — not surprisingly in September, when the Arctic hits its annual summer minimum.

The data shows the cycle of warming and melting is self-reinforcing, causing the global decline to accelerate. The ice has melted twice as fast from 1996 to the present as it did from 1979 to 1996.

“The paper conveys an important message that is often lost when climate change skeptics point to the increasing trend of sea ice in the Southern Hemisphere: The Arctic has lost much more sea ice than the Antarctic has gained. In other words, the planet as a whole is losing sea ice,” John Walsh, editor of the journal and a climate scientist at International Arctic Research Center at the University of Alaska Fairbanks, said in an email.

Julienne Stroeve, a sea ice researcher at the National Snow and Ice Data Center in Boulder, Colo., said the trends at each pole were less important than the overall impact of melting ice on the planet’s energy budget. The shift from an Arctic covered by white ice that reflects the sun’s rays to absorbent open ocean is much more important to that question than the more minor Antarctic increases.

Stroeve, who wasn’t involved in the study, also didn’t mind the interest in the Antarctic trends.

“The attention on the Antarctic ice growth is OK because as scientists we need to better understand the processes that have impacted Antarctic sea ice changes, so this creates more interest to do so,” she said.