For the first time, scientists have injected carbon dioxide into ancient lava flows and watched it solidify, demonstrating that capturing carbon dioxide from the atmosphere or a power plant smokestack and safely storing it underground may be a realistic way to help reduce greenhouse gas emissions to tackle climate change, according to research published Friday.

Scientists working at the Wallula Basalt Pilot Project in Washington State turned liquefied carbon dioxide into solid rock by injecting the gas into basalt formations. Over a span of about two years, the carbon dioxide solidified into a mineral called ankerite, according to the study conducted by Pacific Northwest National Laboratory researchers. The research was published in the journal Environmental Science and Technology. 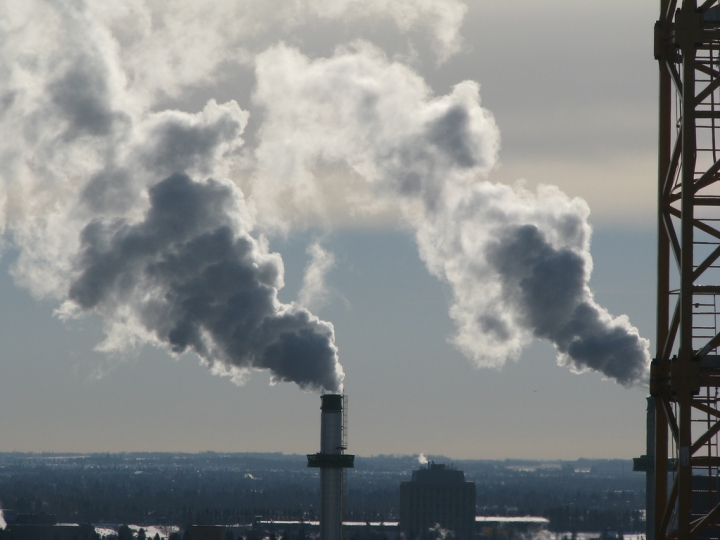 “This study further supports the idea that one of the major rock types on the planet — basalts — can be used to store carbon dioxide permanently and safely,” said study lead author Pete McGrail, a carbon dioxide and climate change researcher at PNNL.

Carbon capture and storage may be critical to helping prevent global warming from exceeding 2°C (3.6°F), either by capturing emissions from their source or by directly removing carbon dioxide from the atmosphere, according to the Intergovernmental Panel on Climate Change.

But scientists worry that storing captured carbon underground as a liquid or a gas may not be safe because stored carbon dioxide could explosively leak into the atmosphere through fissures in the earth or be exposed to terrorism risk, creating a climate catastrophe.

To solve that problem, researchers have been studying ways to store carbon dioxide underground as a solid, especially in basalt formations.

Basalt is a volcanic rock that makes up roughly 70 percent of the earth’s surface. When it is exposed to carbon dioxide and water, a chemical reaction occurs, converting the gas to a chalk-like solid material. Scientists previously thought the chemical reaction would take thousands of years to occur, but new research shows it can happen within a few years.

“Basalt storage is unique in the geologic sequestration of carbon dioxide because the principal trapping mechanism is a chemical reaction that locks the carbon dioxide away as a carbonate mineral that can never leak or return to the atmosphere,” McGrail said.

Earlier this year, researchers at the CarbFix project in Iceland were able to pump a geothermal power plant’s carbon dioxide-rich volcanic gases into deep underground but recently formed basalt formations and chemically solidify them in about two years. 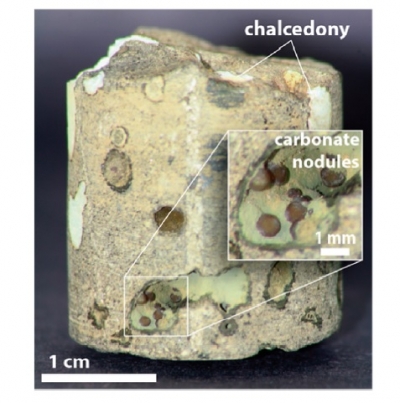 The Wallula project is the first to show carbon dioxide could be solidified in the ancient basalts that are more common globally, said Paul Olsen, an earth and environmental sciences professor at the Lamont-Doherty Earth Observatory at Columbia University who is unaffiliated with either study.

“The recent highly successful CarbFix project in Iceland showed that the conversion of carbon dioxide into limestone could be very fast, but that project used the much more recent lava flows of Iceland and it was not clear the process would work on ancient lava flows such as those that are widespread in many places on land near major cities and their associated power plants,” Olsen said. “It was also the first major test using liquefied carbon dioxide that is relatively easy to transport.”

The Wallula project’s success shows that commercial-scale carbon sequestration from electric power plants is possible, albeit more research needs to be done to show how the process could be scaled for use commercially around the world.

“It is not a total solution to the problem by any measure,” Olsen said. “It is, however, one part of a solution, especially as a bridge until fossil fuel-burning power plants can be replaced by renewable sources of energy or even nuclear.”

McGrail said there is no risk of the solidified carbon dioxide to dissolve in water and escape back into the atmosphere.

Jeffrey Bielicki, a professor of geodetic engineering at Ohio State University, said one of the challenges researchers face in proving the feasibility of safe carbon sequestration is the difficulty of reproducing lab results in the real world.

“The fact that this is a field study that occurred in real-world conditions is very encouraging,” he said. “Each advance such as this moves us closer to increasing the numbers of commercial-scale carbon dioxide storage operations.”