LONDON – Large forests planted with a single species of tough small trees could capture enough carbon from the atmosphere to slow climate change and green the world’s deserts at the same time, researchers say.

A group of German scientists says the tree Jatropha curcas is resistant to arid conditions and can thrive where food crops would not survive.

Jatropha curcas could be the way to remove atmospheric carbon, the researchers say.
Credit: Immersia via Wikimedia Commons

Unlike other geo-engineering schemes, which are expensive and rely on humans interfering with nature, this project merely encourages natural tree growth.

Under the slogan “Nature Does it Better,” the scientists say the costs are comparable with the estimated cost of developing carbon capture and storage (CCS) technology at power stations. With only a small proportion of the world’s deserts, they say, these trees could take out most of the additional carbon dioxide emitted by humans since the beginning of the industrial revolution.

The study, published in Earth System Dynamics, a journal of the European Geosciences Union, says “carbon farming” addresses the root source of climate change by taking carbon out of the atmosphere as fast as we put it in.

One hectare (.0039 square miles) of Jatropha trees can take 25 tons of carbon dioxide out of the air annually over 20 years. As it grew, a plantation occupying just 3 percent of the Arabian Desert would remove from the atmosphere the same amount of CO2 as all the motor vehicles in Germany produced over the same period.

The German scientists say all they are doing is working with nature. The trees would need a little help, however, in the form of water. The team therefore proposes starting the plantations near the coast where desalination plants would provide enough water to get the saplings established.

“To our knowledge, this is the first time experts in irrigation, desalination, carbon sequestration, economics and atmospheric sciences have come together to analyze the feasibility of a large-scale plantation to capture carbon dioxide in a comprehensive manner.

“We did this by applying a series of computer models and using data from Jatropha curcas plantations in Egypt, India and Madagascar,” says Volker Wulfmeyer of the University of Hohenheim in Stuttgart. 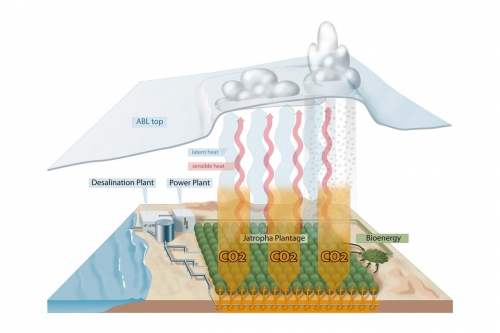 The idea has a price tag of 42 to 63 euros per ton of carbon removed from the atmosphere, roughly the same cost as CCS, which is much favored by the UK and other governments as one of the “solutions” to mitigate climate change.

But there are more advantages. After a few years, the trees would produce bio-energy (in the form of tree trimmings) to support the power production required for the desalination and irrigation systems.

“From our point of view, afforestation as a geo-engineering option for carbon sequestration is the most efficient and environmentally safe approach for climate change mitigation.

“Vegetation has played a key role in the global carbon cycle for millions of years, in contrast to many technical and very expensive geo-engineering techniques,” said lead author Klaus Becker, also from the University of Hohenheim.

A known advantage of planting trees in arid regions is that they increase cloud cover and rainfall, a further greening of the desert. On the minus side, irrigation can lead to a build-up of salt in the soil, damaging the plantation.

Although the researchers have done computer simulations of the effects of these plantations on deserts, there is no substitute for a pilot project. They are hoping their paper will stimulate enough interest and money to begin field trials of the idea.