Scientists Are Racing to Unravel an Ice Avalanche Mystery

In July, one of the largest ice avalanches ever recorded ripped through a remote area of Tibet. Scientists are now working in the region to understand what caused such a massive chunk of ice to break off a glacier and wreak havoc on the landscape and people living in the region.

There are signs climate change could have played a role in weakening the glacier and could make others in the region and around the world more unstable with potentially deadly results for people living in their shadow.

On July 17, a huge swath of ice tore across the landscape in Rutog county in the northwest corner of Tibet, rumbling for 3.7 miles before reaching the shores of Aru Co Lake. The ice slide killed nine herders in its path along with 350 sheep and 110 yak, according to news reports. Local authorities also evacuated other people living in the area after discovering cracks in surrounding glaciers.

Before and after imagery shows the damage an ice avalanche in Tibet's Rutong county.
Credit: NASA Earth Observatory

In all, about 3.5 billion cubic feet of ice broke off from a glacier, enough ice to cover a nearly 4-square mile area in a layer of ice up to 98 feet thick in places. Before and after satellite imagery pulled by NASA’s Earth Observatory convey the huge landscape change after the avalanche.

According to Nature, the only comparable ice avalanche ever recorded is a 2002 event in Russia’s Caucasus Mountains that killed 140.

This avalanche was different, though, because it happened on relatively flat terrain. Scientists are looking for clues about its possible cause in the hopes of being able to use that information to warn residents in other slide-prone areas. It could be a long process, though, due to the remoteness of the region and continued concerns about instability and avalanches or landslides.

“This event really has no precedent, and no apparent trigger,” Joseph Shea, a scientist at the International Centre for Integrated Mountain Development, said in an email which has been published as a blog post. “But low-angle glaciers generally don’t just slide off mountains, so the field investigations and local data will be really important for determining the cause of this disaster.”

One possible cause is that the base was lubricated by melting water, allowing it to suddenly tear free of the main glacier. Climate change has helped send temperatures sailing higher at a rate of about 0.7° F (0.4·°C) per decade since 1960 in the region. That’s twice as fast as the rest of the world. It will take months of research to get to the bottom of the role climate change played, but the instability it’s causing in the mountains is clear.

“The risk of natural hazards is amplified in the mountains and by the mountains,” Shea said. “And climate change generally acts to enhance these risks even further.”

Shea and Simon Gascoin, a remote sensing expert at the Centre d'Etudes Spatiales de la BIOsphère in Toulouse, France, said there were no notable alarm bells immediately preceding the slide aside from some heavily crevassed areas near the top after looking at satellite imagery and weather data in the month before the event. Gascoin has also written about the disaster and was the first to call attention to the satellite images of the massive avalanche. 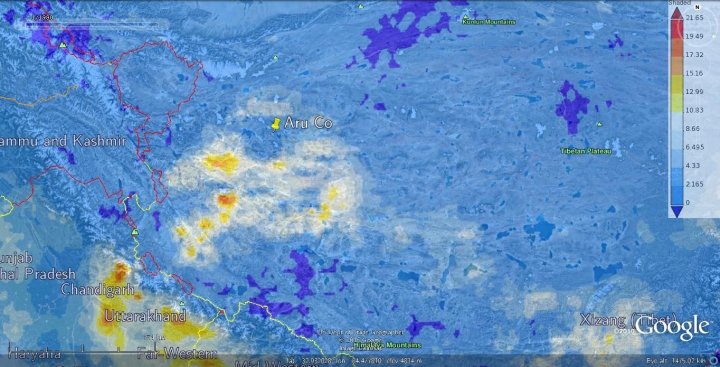 Temperatures were 1.8°-3.6°F (1°-2°C) above normal in the month preceding the slide, which while warm isn’t exactly a heat wave. Satellite data showed that heavy rainfall fell in the areas adjacent to the slide in the days before the event, but Shea and Gascoin said on-the-ground measurements would help provide a clearer picture.

Beyond the threat of ice avalanches, climate change is also creating other hazards in the mountains. Disappearing glaciers can make slopes unstable and lead to landslides and rockfalls.

People living down valley are also at risk from glaciers in a warming world. As glaciers recede, they can leave behind lakes impounded by earth piled up at the glacier’s former terminus. Those dams can occasionally break apart and release violent floods.

“Climate change is causing more glacial hazards through mechanisms we don’t fully understand,” Tian Lide, a glaciologist at the Chinese Academy of Sciences, told Nature. “There is an urgent need for more monitoring and research efforts, especially in populated areas in high mountains.”