Scientists Know How Big the Larsen C Iceberg Will Be

Like a tailor with a tape measure, scientists have been measuring the crack using ESA satellites. The next Sentinel-1 satellite pass will happen later this week, providing a high-resolution look at whether the Larsen C ice shelf has finally calved an iceberg.

ESA’s CryoSat mission has been used to measure the thickness of the eventual Larsen C iceberg. On average, it will be about 625 feet thick but could dip as far as 690 feet below the water's surface.
Credit: ESA

While the Sentinel-1 satellite has provided the clearest view of the state of the crack, CryoSat, another ESA mission monitoring ice at both poles, has the ability to see through water and ice, providing the clearest understanding of the volume of the soon-to-be iceberg.

According to remoting sensing expert Noel Gourmelen from the University of Edinburgh, the iceberg will average about 625 feet in thickness from top to bottom, maxing out at about 690 feet below the water’s surface. Knowing the surface area will cover about 2,550 square miles has allowed scientists to estimate that the iceberg will contain roughly 277 cubic miles of ice.

The iceberg is expected to have enough ice to fill more than 463 million Olympic swimming pools. Or put another way, it’s enough to cover all 50 states in 4.6 inches of ice, allowing you to skate coast-to-coast and take victory laps around Hawaii and Alaska. So yeah, it’s a huge ice cube, the likes of which has rarely occurred in modern history.

Because it’s breaking off of an ice shelf already floating in the ocean, the iceberg will not have an impact on sea levels. But scientists will be tracking its path through the Southern Ocean because of the threat it could pose to ships, particularly as it calves comparatively smaller icebergs. 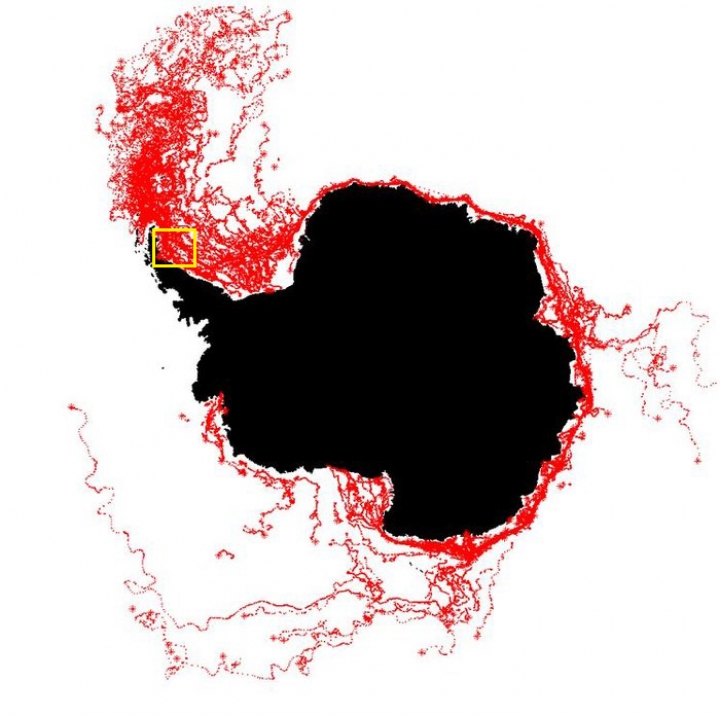 The paths of all icebergs observed by ESA from 1999-2010. The yellow box shows where the Larsen C iceberg will start its journey.
Credit: ESA

The Weddell Sea, which is where the iceberg will begin its journey, typically spits floating ice on a path along the Antarctic Peninsula. From there, icebergs have usually followed a path out into the south Atlantic or along the Antarctic Circumpolar Current, according to historical data compiled by the ESA.

Beyond monitoring the threat to mariners, scientists will be intently checking on what remains of the Larsen C ice shelf. The iceberg-to-be represents approximately 10 percent of the ice shelf’s area. Losing that much mass at once is likely to change how the ice shelf behaves and scientists will be watching closely to see if more icebergs form or if the shelf exhibits other signs of weakness.

If the ice shelf does eventually disappear, it could accelerate the rate of sea level rise by unleashing a torrent of ice currently clinging to the Antarctic Peninsula. It’s a story playing out not just with Larsen C, but with other ice shelves around Antarctica as warming waters and air driven by climate change cut them down to size (though the Larsen C rift is likely due to natural causes). Their continued health is one of the key factors in determining how much oceans will rise.

Editor's Note: A previous version of this story said the Larsen C iceberg contained enough ice to cover all 50 states in an inch of ice. In fact, it could cover them in 4.6 inches of ice.

You May Also Like:
Global Warming Tipped Scales in Europe’s Heat Wave
Climate Change Will Hit the Poorest the Hardest in the U.S.
The Larsen C Rift is Racing to Its Conclusion