This is Why Scientists Have Hope For the Climate

There’s no getting around the fact that climate change is a bummer. The planet is warming, ice is melting, oceans are acidifying and, well, you get the point.

While the bad news is important — it lets us know what we’re getting into with this whole climate change thing — it’s also worth remembering there’s reason for hope.

This year the world finally came together in Paris where a landmark climate pact was agreed to to try to put a cap on greenhouse gas emissions, and there are some fascinating innovations that could speed the world’s efforts to curb climate change. We asked climate experts for their top reason for climate hope in 2015 and what to look forward to in 2016. Below are their answers, edited slightly for clarity or length.

What's the biggest reason to be hopeful about the climate at the end of 2015?

David Titley, director of Penn State’s Center for Solutions to Weather and Climate Risk: Paris, of course, but more substantively for the U.S. domestic movement is the sense more and more different groups are seeing climate change as an issue within their domain: big business, insurance and finance, multiple major religions, the divestment movement, health, national security, movies, and the media, as well as the traditional science and environmental communities. Ultimately, we have to have enough people care enough to get Congress to engage constructively and move both policies and money to transition our energy systems to non-carbon based forms as quickly as possible. Huge task, but if we’re focused we can do this.

Richard Somerville, professor emeritus at Scripps Institution of Oceanography: The biggest reason to be hopeful about the climate at the end of 2015 is the Paris Agreement reached in December 2015 at the COP21 negotiations in Paris. This agreement provides a roadmap to reducing the risk of dangerous climate change. However, when all is said and done, sometimes more is said than done, and the future of the climate system depends on the degree to which nations obey the letter and spirit of this roadmap and work to improve it.

Marshall Shepherd, director of atmospheric sciences at the University of Georgia: I am encouraged that the notion that climate change is a political issue is starting to erode. Key conservatives, major corporations, the military and faith communities recognize the challenges and opportunities. The recent Paris agreement is a bold step. It isn’t perfect, but it is an important signal.

Simon Donner, climate scientist at the University of British Columbia: We've thrown down the gauntlet. In Paris, the world agreed that greenhouse gas emissions must reach net zero during the second half of the century to avoid dangerous impacts from climate change. With global emissions peaking this year, and wind and solar prices at all time lows, there's hope we can meet the ambition of Paris with action.

Do you have a climate wish for the next year?

David Titley: My climate wish would be that Congress becomes a constructive partner in this challenge. While they may not lead, they could be very helpful with real R&D investments for non-carbon based energy and policies that assess the true cost of carbon. We are not close yet and still have these false debates over science. My climate wish is that we move on to pragmatic solutions.

Simon Donner: My biggest wish is that there is minimal harm from the ongoing El Niño event. El Niños can cause serious droughts in parts of Asia, Africa and the Pacific, not to mention heavy rain and flooding in parts of the U.S. With the bump from global warming, this ongoing El Niño could be one of the deadliest.

Corinne Le Quere, director of the Tyndall Centre for Climate Change Research: That global carbon dioxide emissions continue to plateau or even decrease in 2016, as they have done in the past two years.

Lesley Hughes, Australia Climate Council councillor: My climate wish for the New Year is that all the parties to the Paris agreement waste no time in not only implementing their current pledges, but also seek to increase their ambition. My greatest wish would be to see global competition to have climate policy and action to be as great a source of pride and focus as winning gold medals at the Olympics — after all, saving the planet is more important than sport! 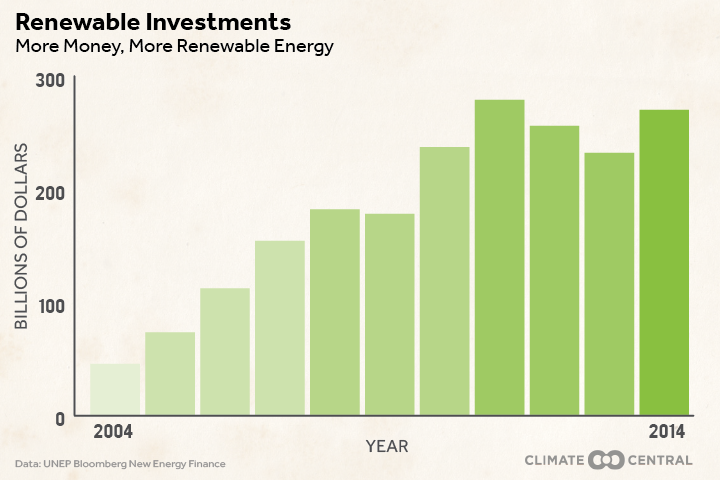 Investments in renewables are poised to explode on the heels of the new Paris agreement.

Is there an area of climate research poised to see breakthroughs in the next year?

Richard Somerville: I think that a climate research area that is poised for important advances is the topic of observationally monitoring emissions of heat-trapping greenhouse gases worldwide, which will be critical both in establishing a baseline of present-day emissions, and in determining whether pledged future emissions reductions are actually accomplished. I predict that a great deal of attention will be paid to this area, because such measurements will be critical in discovering whether national pledges of future emissions reductions can be verified empirically.

Corinne Le Quere: The attribution of increases in flood risks to increases in heavy rainfall from a warming climate is bound to see some key publications as the data is becoming increasingly clear and the science of detection and attribution has progressed remarkably in recent years.

I’m also keeping an eye on global temperature to see how quickly it rises after this year’s El Niño event.

Lesley Hughes: I think that 3D printing using carbon fiber technology could absolutely revolutionize manufacturing as well as use carbon dioxide as a resource and drastically reduce energy and resource use. Just think, no more need for steel or aluminium — very exciting!