In many ways, the Rockaways is the end of the line.

In essence, it’s the edge of America — a spindly peninsula acting as a barrier island exposed to the ravages of the Atlantic on the eastern edge of New York City. An hour from Manhattan on the subway, it’s the terminus of the A Train, the only rapid transit access to the rest of the city for the 100,000 people who live there. 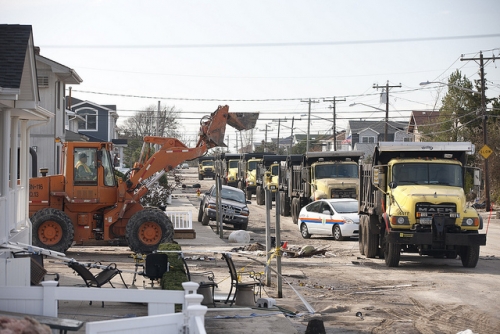 The Rockaways is also where Long Island’s power lines end.

That’s one of the reasons New York City officials singled out the Rockaways as the ideal place for a microgrid experiment after the spit of land was thrashed by Hurricane Sandy two years ago. The megastorm killed at least 9, stranded more than 34,000 without power, and submerged homes in seawater as the Atlantic surged around them.

It underscored New York’s vulnerability to nature’s wrath as a low-lying coastal city and it is at the root of why the city government issued a climate change response plan called “A Stronger, More Resilient New York.”

Deep within that report, the city suggested that the Rockaways were an excellent candidate for a microgrid for several reasons. The peninsula is vulnerable to hurricanes and storm surge. Extreme weather is almost guaranteed to keep the Rockaways in the dark for days or weeks. And, being at the tail end of Long Island Power Authority’s grid means it could be easily separated from the grid and operate autonomously under its own power.

A microgrid — which can take many forms, but is basically a self-contained power grid with its own electric and/or battery-powered generators — would link together critical services such as hospitals, schools, grocery stores and gas stations, etc.

When the main grid goes down in a storm, the generators can power emergency rooms, classrooms and supermarkets, mitigating a storm’s devastation and keeping emergency services available.

While New York City called for a study to contemplate a microgrid in the Rockaways, the state is moving more aggressively on microgrids there and elsewhere throughout the state.

Management of the Rockaways’ power grid has been taken over by PSEG Long Island, part of Public Service Enterprise Group, which in early October issued an updated plan called Utility 2.0 that aims to modernize the company’s electric system and may open the door to a microgrid project, said Jackson Morris, formerly of Pace University’s Energy and Climate Center and now director of eastern energy for the Natural Resources Defense Council.

Utility 2.0 proposes a $76 million investment in unspecified ways to help reduce and more effectively manage energy use at the Rockaways so the company can wait to upgrade transmission lines connecting the peninsula within New York City to Long Island.

“It’s basically infrastructure deferment, but there’s a good chance a lot of the proposals that would come forward would have microgrids,” Morris said.

Microgrids are the focus of a new New York State program called NY Prize, a $40 million competition announced in August challenging communities and entrepreneurs around the state to design community microgrid projects. 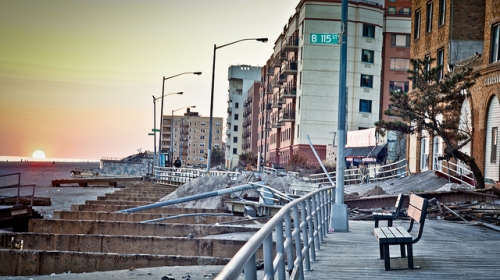 Sunset over a Sandy-ravaged Rockaways in New York City in December 2012.
Credit: Cgc76/flickr

Mark Torpey, NYSERDA director of research and development, said he hopes 30 to 40 proposals would be entered in the contest, and 10 or so would be given money to develop their proposals. The best would get funding for implementation.

Further details about the NY Prize competition and how to submit proposals will be announced later this fall.

New York State is also trying to work out some regulatory challenges that might face microgrid projects through a plan called “Reforming the Energy Vision,” announced in 2013.

Morris said Reforming the Energy Vision, or REV, proposes to find ways to transform the way electric power is distributed in New York so renewables, microgrids and other innovations can be more effectively integrated into the system. It also aims to make power distribution facilities more nimble in response to outages in extreme weather.

The proposal would help smooth the way for new projects such as Con Edison’s Brownsville demand management project in Brooklyn, which aims to use microgrids and battery storage to more effectively manage the use of electricity there, helping to save energy in a fast-growing area.

If New York state regulators approve the REV plan, it will take years to transform the state’s power distribution system. Even so, the plan is a start toward preventing tens of thousands or maybe millions of New Yorkers from being stranded without power for weeks, even if those efforts aren’t ready before the next hurricane takes aim at New York City.

You May Also Like:
Expanding Antarctic Sea Ice is Flooding ‘Warning Bell’
Oceans Getting Hotter Than Anybody Realized
Two Years On: Sandy Inspires Storm of Climate Research
Melt of Key Antarctic Glaciers ‘Unstoppable,’ Studies Find
Climate Fueled Some of 2013’s Most Extreme Events