As Hurricane Sandy barreled ashore a year ago, the storm forced the shutdown of several Northeast coastal nuclear power reactors, including the Oyster Creek plant on the Jersey Shore, which took the brunt of Sandy's huge storm surge. Another reactor at Indian Point Energy Center north of New York City shutdown because of power grid disruptions, and a third reactor in southern New Jersey shutdown when Sandy knocked out four of its circulating water pumps.

No nuclear power plant in Sandy’s path was in imminent danger of a meltdown, but the force and size of the storm surge served as a warning that rising seas and higher storm surges, driven in part by climate change, could eventually have a devastating effect on the seven low-lying nuclear power generating sites on the Northeast Coast in future hurricanes. 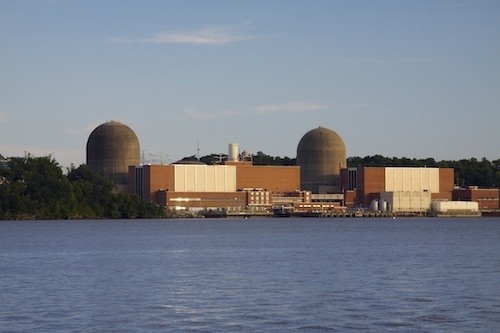 Many nuclear power plants are built near low-lying coastlines because they need access to vast quantities of water to keep their reactors cool, and they were built in those places decades ago, before climate change-driven sea level rise was a serious concern. These plants also rely on the electric grid to power their cooling systems, but as hurricane storm surges threaten both power outages and flooding, rising sea levels could eventually expose nuclear power plants to flooding and power outage dangers they weren't designed to handle.

The northeast's coastal nuclear plants are within 50 miles of tens of millions of people living in the region's largest metropolitain areas, including Boston, New York City, and Philadelphia.

“We learned that they (the region’s nuclear power plants) just barely made it through safely during Sandy, but that does not imply that future storms, when combined with continued SLR (sea level rise), could not cause serious problems,” said Klaus Jacob, seismologist at Columbia University’s Lamont-Doherty Earth Observatory in Palisades, N.Y. “Since many of the NPPs (nuclear power plants) in coastal areas of the U.S. east of the Mississippi were built, sea level has risen by a half-foot, and in some places, more.”

Scientists are confident that sea level in the New York City region could rise by between 3 and 5 feet by the mid-2080s, he said.

Storm surges are expected to be more severe with rising seas in part because higher sea levels provide a higher foundation for the storm surge to build upon, preventing low-lying areas from draining and causing an additional flooding threat. 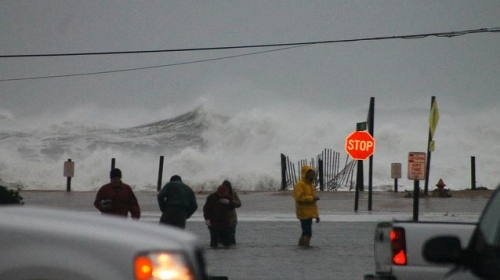 “These industrial facilities were designed to operate on dry ground, so if rising sea levels and storms flood the area, the plant is put into circumstances not envisioned in its design. We should expect disruption of operations and possibly malfunctions that release radioactive materials,” he said.

Though there were no shutdowns at Millstone or Hope Creek during Sandy, one reactor at Salem was shut during the storm, and Millstone powered down slightly because of the hurricane. Research for the Stanford paper conducted by political science professor Phillip Lipscy’s team shows that the three plants’ lack of a seawall and elevation under 4 meters expose them to significant flooding risk in future storms.

At Oyster Creek, which is scheduled to be shutdown and decommissioned in 2019, Sandy’s storm surge was fearsome: more than 7 feet of water flooded the plant’s cooling intake structure. It did not flood the plant itself — the water line was far below the 22-foot flood the plant was designed to handle—but threatened a possible shutdown of cooling water intake pumps. The pumps weren’t critical at the time because the reactor had been shut down days before for refueling.

The Stanford research didn’t mention Oyster Creek, despite the alert issued there during Sandy, but the plant’s operator, Exelon Generation, says the plant’s safety and emergency procedures worked as planned during the storm. “All Exelon plants, including Oyster Creek, are robust, fortified facilities, capable of withstanding the most severe weather,” spokeswoman Suzanne D’Ambrosio said.

Scientists are also concerned about how future storm surges and sea level rise could affect the Indian Point plant in New York that provides New York City with about 30 percent of its electricity.

In a letter to the U.S. Nuclear Regulatory Commission the month before Sandy hit, Jacob warned the NRC that additional study is needed on how rising sea levels, storm surges and tsunamis would affect the Indian Point Energy Center, which was shutdown during Sandy and sits about 15 feet above sea level on the Hudson River, 35 miles north of New York City. Severe storm surges on the Hudson River can easily be produced by hurricanes making landfall on the New York-New Jersey border, he wrote.

“Storm surge probability to exceed a given surge height is surprisingly affected (i.e., strongly increased) by climate-change induced sea level rise, which is forecast to accelerate more during this 21st century than it already has accelerated during the last half-century,” Jacob said, adding that recent observations have shown that a hurricane storm surge hitting Manhattan and the Jersey Shore are barely diminished on the Hudson River near Indian Point.

The likelihood that any given storm could cause a nuclear power plant to melt down may be remote, but Sandy had some lessons to teach about that as well, said Michael Gerrard, director of the Center for Climate Change Law at Columbia Law School. 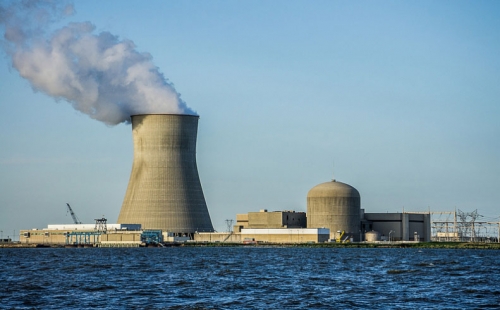 “A major lesson is that a reasonable worst-case scenario should be considered in all environmental impact assessments,” he said, adding that he is unsure what Indian Point’s operators have done to address a worst-case scenario. “It’s important to take a long view forward as to what kinds of events have any more than a trivial chance of occurring.”

For Indian Point and the surrounding region, the stakes when disaster strikes are particularly high. Nearly 20 million people live within 50 miles of the plant, which is currently embroiled in an NRC relicensing controversy and a push from New York Gov. Andrew Cuomo to shut it down, partly because the state considers the plant’s emergency evacuation plan inadequate. The operating license for one Indian Point reactor expired in September, and the plant has been granted permission to operate without a license until the NRC can complete the renewal process sometime next year.

“The main concern, along with flooding, is that a large storm like (Sandy) is going to knock out the power grid,” said Phillip Musegaas, Hudson River program director for Hudson Riverkeeper, a local conservation group. Nuclear plants need power to keep the cooling systems operational, and if flooding knocks out both the power grid and backup generators, a meltdown could occur, he said.

“As part of the industry effort in response to Fukushima, we are undertaking a re-analysis of postulated flooding scenarios using updated climate modeling, which takes into account sea level changes,” Nappi said.

The Fukushima disaster prompted the NRC to reevaluate the flooding and seismic hazard potential at all nuclear power plants nationwide, including Indian Point and those along the Northeast Coast. The NRC did not require power plants to conduct any additional flooding or safety studies specifically in response to Sandy because all plants in the storm’s path performed as designed even at the height of the storm surge, NRC spokeswoman Diane Screnci said.

The NRC is requiring all nuclear power plant operators to use “present-day” data to re-evaluate flooding and seismic hazard potential, and if the hazards are found to be worse than originally calculated, the NRC will analyze the data to determine if a plant’s structure and components need to be updated to account for the new hazards, she said.

Nuclear power plant operators are required to account for climate change-driven sea level rise in their re-evaluations of long-term flooding risk for each plant, Screnci said.

The NRC is requiring nuclear plant operators to use National Oceanic and Atmospheric Administration tide gage data to determine trends in the height of sea level. “The long-term sea level rise should be derived for the expected life of the nuclear power plant based on the trend in site or regional tide gage station data,” the NRC’s post-Fukushima hazard re-evaluation guidance document said.

Indian Point's flooding risk re-evaluation is due on Dec. 31. The deadline for other Northeast nuclear plants is in March, 2014.

The nuclear power industry says that climate change and sea level rise do not pose any significant problems at Indian Point and other lower-lying nuclear power plants in the Northeast, and it envisions no circumstance in which a storm or flood could present a scenario that a nuclear power plant was not designed to handle.

Joe Pollock, vice president of nuclear operations at the Nuclear Energy Institute, a Washington, D.C.-based lobbying group, and former vice president of operations at Indian Point, said he believes Indian Point’s position 35 miles up the Hudson River prevents it from being seriously affected by a hurricane storm surge. Should any storm surge flood Indian Point or any other coastal nuclear power plant, the rising water would damage the surrounding communities and Manhattan first before endangering the nuclear plant itself, he said.

Asked whether he believes climate change poses a threat to Indian Point or any other coastal nuclear power plant, Pollock said, “I don’t believe there is a threat.” Nuclear power plants have weathered hurricanes and tornadoes, showing that “the plants are designed to handle those types of natural events,” he said.

But Musegaas said he fears Indian Point may not be able to withstand a major hurricane in the coming years, and regulators are doing too little to prevent disaster from occurring.

“For Indian Point, it really depends on what the sea level rise and the tides do,” he said. “If we have additional storms like Sandy — if you had the rain of Hurricane Irene and the storm surge from Sandy, we’d have had flooding on the site. . . . There are no requirements to change the site to make it more storm resilient. No opportunity with the NRC to raise sea level rise issues in the relicensing case that’s going on now. The issue is not addressed there.”