This December, Hannah Zanowski, a graduate student at Princeton University, will travel to Cape Town, South Africa, bundle up in something warm, and board a German research icebreaker called the Polarstern. Over the next eight weeks, the ship will make its way from the southern tip of Africa to the bottom of South America via the Weddell Sea off the coast of Antarctica, stopping every so often along the way, so Zanowski and the scientists she’ll be working with can plop one of 12 yellow, oblong, instrument-laden, robotic floats into the sea.

For the next five years, on roughly weeklong cycles, each float will dive deep, then surface to relay the data it will have gathered on the metabolism of this frigid and exotic stretch of ocean. That data will help scientists paint a better picture of what climate change means for that region and the world.

Those 12 floats are the first of almost 200 that will be deployed over the next 5 years as part an ambitious project known as Southern Ocean Carbon and Climate Observations and Modeling or SOCCOM. The project’s goal is to understand the role that this harsh, remote and poorly studied area plays in regulating Earth’s climate system, as well as how human emissions of heat-trapping carbon dioxide gas are affecting that system.

The idea that oceans influence climate and vice versa isn’t new. Scientists already know that the oceans absorb heat and carbon dioxide from the atmosphere, tempering the impact of the extra carbon dioxide humans have been generating since the Industrial Revolution began, about two centuries ago.

Even though it makes up only about 30 percent of the Earth’s ocean surface by area, the Southern Ocean does far more than its share of the work. It’s responsible for about 75 percent of all the heat the world’s oceans absorb and about half of the carbon dioxide. Yet despite its outsize role in the global climate system, scientists probably know less about the Southern Ocean than they do about the surface of Mars.

Those who have actually visited the Southern Ocean have no trouble understanding why that is. It’s hard to get to, and once you’re there, it’s not a very nice place.

“I thought I knew what a blizzard felt like,” Joellen Russell, one of SOCCOM’s lead scientists from the University of Arizona, said. “But the Southern Ocean was a total other world.”

Russell is no stranger to cold. She grew up in an indigenous Alaskan fishing village 31 miles north of the Arctic Circle.

The winds south of the Antarctic Circle are some of the strongest in the world, whipping up equally outsize waves. Russell recalled a previous trip to the region, saying, “The mountains of water were so big that the petrels and the albatross would swoop around them like they were fighter jets going around a mountain side.”

Russell’s interest in this inhospitable sea is improving climate models using the data the floats will send back.

Now it’s Zanowski’s turn to brave those waters. “This is something I’ve never done before,” she said. “I’ve never even spent 2 months away from my regular life, and my regular haunts in the U.S., so this is going to be a wildly different experience for me.”

As an undergraduate at Arizona, Zanowski got her oceanography feet wet in Russell’s introductory course and became inspired. The two later conducted research on the impact of wind dynamics on Antarctic sea ice. Now she is a graduate student at Princeton, working with SOCCOM director, Jorge Sarmiento. Along with colleagues from the University of Arizona, Climate Central, the National Oceanic and Atmospheric Administration, the Monterey Bay Aquarium Research Institute (MBARI) and Scripps Institute of Oceanography, she and Russell will try to understand the Southern Ocean’s role in climate and climate change in detail. 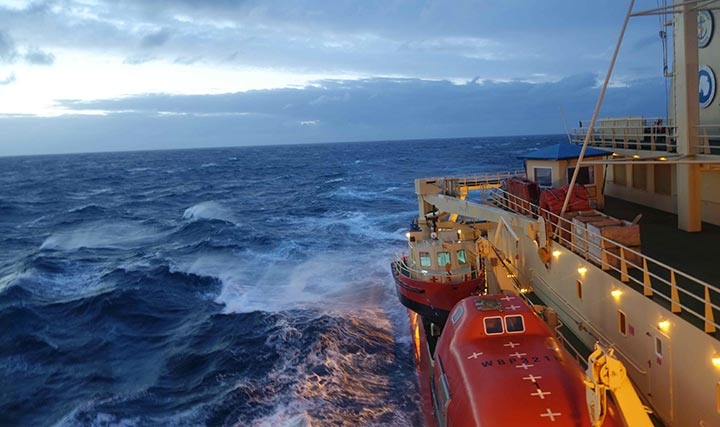 Using autonomous floats frees scientists from the difficulties of making measurements in the Southern Ocean themselves, but even the simple act of deploying the floats will be challenging. During winter, ice sheathes almost its entire expanse, with only a few patches of open water. Summer isn’t much better. Though the region is mostly ice-free, the temperature difference between the exposed water, and the ice that does remain helps create powerful cyclonic storms that race around the Antarctic continent.

SOCCOM’s floats are similar to thousands of floats already deployed through a program called Argo, but the Argo floats only measure temperature, pressure and salinity; the new floats will take data on nitrate, oxygen, and acidity, key measures to understand larger processes in the ocean.

“The floats provide the data that really tell us about the vital signs of the Southern Ocean,” Kenneth Johnson, a senior scientist at MBARI, who designed new sensors on the SOCCOM floats, said.

The data from the new sensors will be key to understanding how the climate is changing in different regions. Scientists know, for example, that when the ocean absorbs carbon dioxide from the atmosphere, it forms carbonic acid, which makes it more difficult for shellfish to form their shells. It’s not only shell-building organisms that are in danger. The ecological disruption will likely travel up the food chain, harming mammals and larger fish.

Due to the way currents circulate through the world’s oceans, water in the Southern Ocean is very ancient; some of it was last at the surface 1,000 years ago. The difference between carbon dioxide levels in that pre-industrial water and the levels in water elsewhere will give scientists a better handle on how acidity levels in the oceans are changing.

To measure how the changing water affects biological activity, another sensor shines a small ultraviolet light through the water to detect nitrate, an important nutrient for ocean life. Nitrate ions in the water absorb the light at certain wavelengths, which the float can detect.

Oxygen has a different kind of optical signature. When stimulated by light from an LED, a molecule embedded in the sensor, and similar to chlorophyll — the molecule that gives plants a green color — starts glowing. But in the presence of oxygen, that fluorescence is quenched. The more oxygen in the water, the less glow. The amount of oxygen in the water tells scientists how quickly plants are growing in the ocean.

All of these measurements, taken together, will give scientists a far better idea of what’s going on with the biology, geology and chemistry of the Southern Ocean. 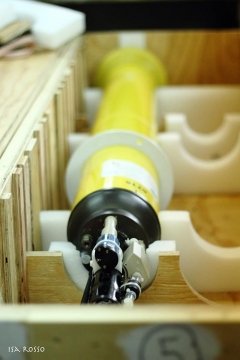 When stood vertically, the SOCCOM floats are taller than 5-foot-6-inch Zanowski. After a float enters the sea, it stays vertical, and a small piston deflates a coffee-cup sized bladder to about half-capacity, causing the float to sink immediately away from the ship, deep into the ocean. At a depth of 1 kilometer, or a little more than a half-mile, the float drifts freely with the current for about a week completely autonomous.

After drifting for a week, the float plunges even deeper to a depth of nearly a mile, at which point it’s ready to take measurements. The sensors turn on, and the float begins its journey upward, reading the ocean as it ascends like an observatory in an elevator back to the surface to relay its data via satellite.

Given how common ice is in the Southern Ocean, the float may encounter an ice ceiling. If it does, sensors at the top will detect the danger, triggering the bladder to stop inflating and prevent the float from crashing into the ice. The float will keep repeating profiles autonomously until the path is clear, at which point, it will surface, beam its data into space and then plunge to start the process over again. Data from the sensors will tell scientists about the ocean’s biogeochemistry while data about where the float surfaced will help map the oceans’ poorly understood currents.

The floats have one more feature worth noting: they’re battery operated, and because they can operate and take measurements for up to 5 years, they have a vastly lower carbon footprint than doing the same amount of science by ship. To top it off, they can make observations 365 days a year rather than just during the summer in favorable weather.

The Polarstern voyage is just the first of many that will follow over the next 5 years, but that makes it special, and Zanowski will excitedly bid goodbye to each float as it begins its mission. She’d love to sign them before they’re launched, but if that’s not possible, she’ll find some way to commemorate the events.