As you watch the miles roll by on family road trips this summer, look just behind the guard rails to see what some scientists believe is a significant untapped resource in the battle against climate change. 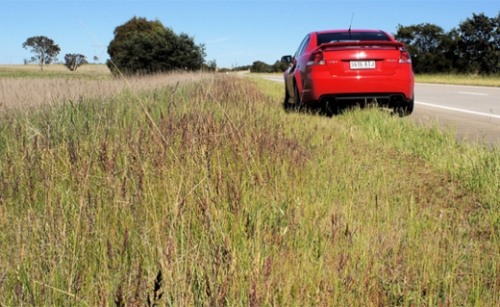 Road banks and berms could be managed as valuable “banks” for carbon sequestration.
Credit: Harry Rose/flickr

The land alongside the 4 million miles of U.S. public roadways, already being maintained by federal, state, and local governments, could be planted with vegetation that helps transfer carbon from the atmosphere into the soil, they say. Road banks and berms, in other words, could be managed as valuable “banks” for carbon sequestration.

“We're talking millions of acres,” says biologist Rob Ament, of the Western Transportation Institute at Montana State University, who led a recent study to gauge carbon storage potential on just a fraction of that real estate – roadsides on federal lands.

Shrubs, grasses, and other plants already along roads in U.S. National Parks, wildlife refuges, and other public lands currently are capturing about 7 million metric tons of carbon each year, Ament said in a report on his findings at this month's North American Congress for Conservation Biology in Missoula.  That's equivalent to the annual carbon emissions of 5 million cars—without any effort made to optimize the mix of plantings and soil management practices for carbon storage.

Add to that the strips of shrubbery and grass along U.S. highways outside federal lands. A previous study by the Federal Highway Administration concluded such roadside greenery stores enough carbon to counter the annual emissions of 2.6 million passenger cars.

Together, the roadside soils and vegetation on federal lands and along U.S. highways, comprising 10.5 percent of all public roads in the nation, are already capturing nearly 2 percent of total U.S. transportation carbon emissions, said Ament, whose team conducted the research for the Highway Administration's federal lands office.

“There is a significant amount of [carbon capture and sequestration] going on right now, passively,” Ament said in an interview. “So the next step is to research active management techniques and take a good hard look at what's possible.”

The plants that best capture carbon – trees – would not be a good choice for the areas closest to roads, because of the obvious safety hazard. But plenty of low woody shrubs and other planting and soil management steps would boost carbon storage, said Ament.

Roadside management today often involves little more than keeping grass mowed and dousing it with weedkillers. Clear sight lines are important, but in some places vegetation is managed beyond what’s necessary, said Ament. “There are certain places where roadsides have more of a golf course aesthetic” said Ament, showing one photo he took of a close-cropped lawn along a U.S. highway in New York. “I'd love to calculate what you could get with trees set back from the roadside, and woody shrubs and understory. There's a lot of potential there for a multi-story forested area.” 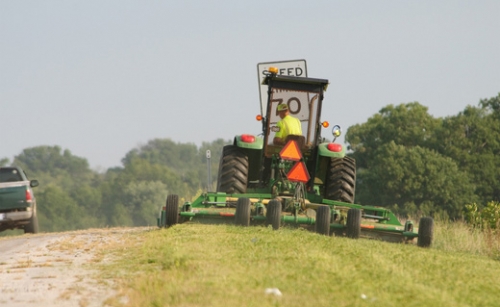 Roadside landscaping along federal roadways absorbs the emissions of about 7.6 million cars. With more active management, it could become a significant carbon sequestration source.
Credit: Missouri Department of Transportation

Work is already underway on the idea. New Mexico has a five-year, $1 million grant from the federal Highway Authority to research methods for boosting carbon capture along the 7,500 miles of state road in its semi-arid environment.

Testing different plantings and techniques over the past year, the state boosted carbon capture on roadsides to from 35 percent to 350 percent over areas that weren't actively managed. Native grasses produced the biggest gains, in the state's prairie regions.

There are other benefits. Mowing less frequently – letting grass grow 8 inches instead of the normal 6 inches  – saves fuel, labor and stores more carbon. “There's a win-win to a lot of what we're doing,” said Rick Wessel, of the New Mexico Department of Transportation's environmental development section. Another benefit: New Mexico and other states might be able to earn revenue from sale of carbon credits for taking such steps.

The U.S. has no mandatory carbon cap-and-trade system and without an international climate change treaty, prices on the international carbon market are low. Nevertheless, New Mexico's early estimate is that it could still garner $1 million in carbon credits per year, said Wessel.

“What's so nice about this is we're not making major changes in behavior but tweaking what we do already so we get a little bit more benefit, while still maintaining the same goals of a safe highway system,” Wessel said.