Several flood-prone municipalities in California filed first-of-their-kind lawsuits against fossil fuel companies this week as they attempt to recoup the cost of coping with rising seas.

The suits point to indisputable climate science and decades of industry efforts to mar that science. Experts likened the legal complaints to those brought against the tobacco industry in decades past, which succeeded by alleging the use of anti-science tactics to mask the dangers of their products. 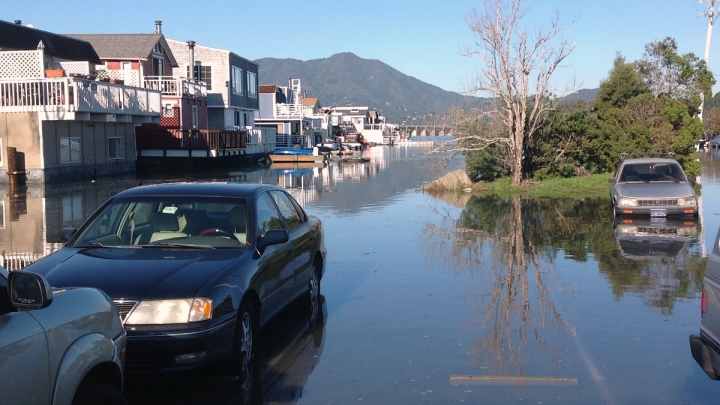 High tide flooding in the city of Sausalito in California's Marin County, which is suing energy companies over rising seas.
Credit: secretivemarshbird/Flickr

The new lawsuits come as 21 young Americans pursue a federal case in Oregon that alleges the U.S. government is violating their rights by failing to take far-reaching measures against global warming. A similar case previously failed in a different federal court.

“This is the next stage in climate change liability litigation,” said Tracy Hester, an environmental law lecturer at the University of Houston. “The first set of cases were all posted in federal court, and as a result they were pretty constrained.”

The sea level rise lawsuits were filed in state superior courts by the oceanfront city of Imperial Beach in southern California and by Marin and San Mateo counties in northern California. Those counties face severe impacts from rising seas on dual fronts: increased erosion and flooding risks at the Pacific Ocean and flooding along the shores of San Francisco Bay.

“It’s time to hold the fossil fuel producers accountable,” said David Pine, a local elected official in San Mateo. “San Mateo County has already incurred considerable expenses in planning for and adapting to the impacts of sea level rise, so we seek damages from the companies to help us pay.”

Although the municipalities face “significant hurdles” in the cases, they have a better chance of success now than would have been the case before decades of industry obfuscation of climate science had been laid bare in the pages of InsideClimate News and elsewhere, said Michael Burger, executive director of Columbia University’s Sabin Center for Climate Change Law.

“The entire framing of the lawsuit is much closer to the tobacco litigation than anything we’ve seen before,” Burger said. “It makes use of all of the information that’s been coming to light over the last several years about the extent of industry research into climate change, and the vast network of think tanks and lobbyists that were deployed to create smokescreens.”

The lawsuit names Chevron, Phillips 66, Arch Coal and dozens of other energy companies as defendants, stating they’re collectively responsible for a fifth of global greenhouse gas pollution released since the mid-1960s. ExxonMobil and Royal Dutch Shell are also being targeted in federal court by the nonprofit Conservation Law Foundation, which alleges rising sea levels have worsened water pollution from some of the energy companies’ facilities in New England.

The companies “have known for decades” that climate change from their products “could be catastrophic and that only a narrow window existed to take action before the consequences would not be reversible,” the California lawsuits state. “They have nevertheless engaged in a coordinated, multi-front effort to conceal and deny their own knowledge of those threats.”

Pollution from fossil fuels produced by the companies has “substantially contributed” to “dire effects” including rising temperatures, more extreme weather and rising sea levels, the lawsuits state — with county residents and taxpayers forced to “suffer the consequences.”

Seas rose worldwide more than five inches last century. The effects of rising temperatures caused by fossil fuel pollution and deforestation are causing seas to rise 50 percent faster now than 20 years ago, leading to frequent flooding around the U.S. and the world.

Natural cycles have temporarily limited sea level rise along the West Coast in recent decades but cities, residents and infrastructure are already being affected. Local officials warn 5,000 acres of land in Marin County, including 1,300 parcels of property and 700 buildings, could be vulnerable to floodwaters in the coming decades.

“I’m all about public education — how do we get our residents engaged on this issue, and then how do we adapt to climate change?” said Kathrin Sears, a local elected official in Marin who works on regional efforts to cope with rising seas through marsh restorations and other efforts.

“How do we move forward? How do we hold accountable companies who are really significantly responsible for these sea-level rise impacts?” Sears said. “This lawsuit against the fossil fuel industry was really just a logical next step.”

The energy companies haven’t commented publicly on the new lawsuits, though they have previously denied being deceptive about climate science. Western States Petroleum Association attorney Oyango Snell said in a brief statement that the group is “aware of the lawsuit and monitoring the situation” but, “as a matter of policy, we don’t comment on active litigation.”