As the first half of 2016 blew away temperature records, it also blew away some carbon dioxide emissions from burning fossil fuels in the U.S., a new U.S. Department of Energy report shows.

Energy related carbon dioxide emissions hit their lowest point since 1991 during the first six months of 2016 because of mild weather, declining coal use and increased use of wind, solar and hydropower. By the end of the year, 2016 is expected to see the lowest level of energy related carbon emissions of any full year since 1992, according to the report, released Wednesday.

U.S. climate policies, such as the Obama administration’s Clean Power Plan, are encouraging utilities to shift away from coal as a way to cut greenhouse gas emissions. Countries that signed the Paris Climate Agreement are trying to limit emissions to prevent global warming from exceeding 2°C (3.6°F) above pre-industrial levels.

Every month during the first half of 2016 was record warm globally, leading to a mild winter in the U.S. and less demand for energy. 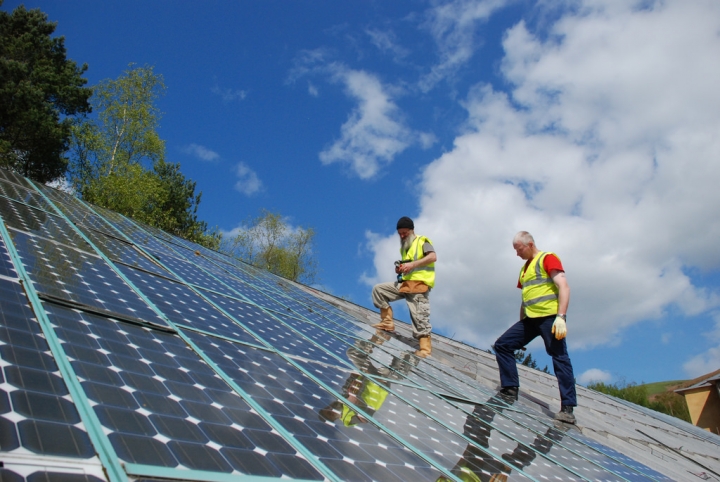 The rise of renewables, including solar and wind power, are contributing to a decline in energy-related carbon dioxide emissions across the U.S. Credit: Centre for Alternative Technology/flickr

During the mild winter, U.S. residential natural gas use fell 13 percent compared to the same period in 2015.

During the first half of 2016, the use of coal to generate electricity fell 19 percent while use of natural gas climbed 8 percent.

Use of renewables to generate electricity—mostly hydropower, wind and solar—increased 15 percent in the first six months of 2016 compared to the same period last year, McFarland said.