Scorching temperatures above 110°F are more often associated with the stark landscapes of places like Death Valley than the cooler reaches of the Pacific Northwest. But a suped-up heat wave has left parts of Washington feeling much more like the desert Southwest and has shattered longstanding high temperature records in many spots. 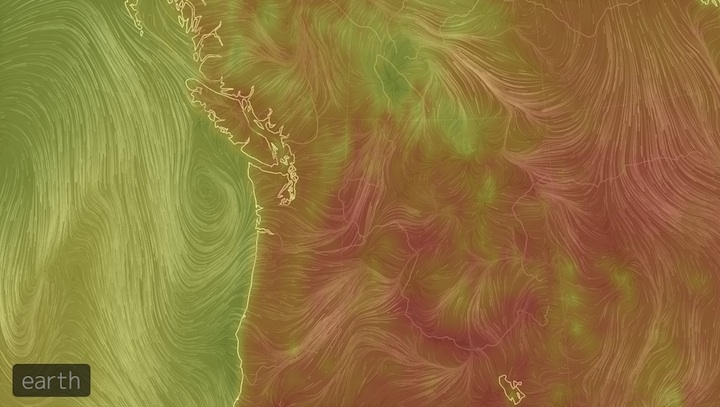 The searing heat even broke the all-time state temperature record for the month of June, with two locations — Chief Joseph Dam and Walla Walla — both hitting 113°F on Sunday, when the event peaked, according to the National Weather Service office in Spokane.

While the skyrocketing temperatures are a marker of a particularly strong area of high pressure, such record-breaking temperatures are more likely to happen in a warming world. Summer temperatures have already increased across the U.S. in recent decades; in the Pacific Northwest they have risen by almost 0.5°F per decade since 1970.

This heat wave began with the development of an intense ridge of high pressure over the West. Such an event isn’t unusual in the summer and temperatures in the inland Pacific Northwest can reach much higher than the cooler coasts, but typically only go up into the 80s and 90s and usually later in the summer. The sheer strength of the ridge was largely what dialed up the temperature more than normal this time, said Andy Brown, the warning coordination meteorologist for the NWS Spokane office.

Also contributing was where the air moving over the region came from: “A lot of this hot weather had originated in the desert Southwest,” Brown said. It’s also possible that the desiccated soils of drought-stricken eastern Washington helped elevate temperatures — if the soils were instead moist, they would have used up some of the excess heat through evaporation, said Karin Bumbaco, assistant state climatologist for Washington.

“With the dry soils from this year's drought, all of the energy goes into warming the ground instead,” she said in an email.

More records falling around #InlandNorthwest. Captured the moment we hit 100 at the office. #HeatWave pic.twitter.com/oVtfBVdB1m

All of that heat meant that plenty of records fell across eastern Washington. Spokane saw its warmest temperatures since 1961, Brown said. “So it is a very significant heat wave.”

The heat was expected to continue through the July 4 holiday weekend, though not at the same levels as last weekend’s peak.

“We’re not going to be talking the crazy hot, record-breaking temperatures,” Brown said.

Though these searing temperatures were the result of a weather event that can naturally happen, summer temperatures in the Pacific Northwest have followed the same upward trend as most of the rest of the U.S. and the world as a whole over recent decades. These rising temperatures are fueled by the buildup of heat-trapping greenhouse gases in the atmosphere that has intensified over this same period.

Warming temperatures in the region are a major concern for water resources, as eastern Washington depends on its winter snowpack to supply reservoirs and streams come the warmer summer months. Exceptionally warm temperatures this past winter led to dismally low snowfall which has led to a widespread drought and amped up concerns over the wildfire season.

The hot air that has descended on the Pacific Northwest has also been particularly dry, with gusty winds that have helped fan the flames of several wildfires. The largest that firefighters are contending with in Washington is the Sleepy Hollow Fire, which has raged across nearly 3,000 acres and burned more than two dozen homes and several commercial buildings. Concerns remain high going into the July 4 weekend because of worries that people will set off fireworks. Many towns have already banned them for the holiday to try to prevent new blazes being set.

While the heat wave will eventually end, the rest of the summer is likely to remain dry for Oregon and Washington, which is bad news for drought impacts and further fire concerns.

“We’re not expecting much in the way of rainfall,” Brown said. “There’s no relief in sight for the fire season, so that’s certainly a concern.”

You May Also Like:
Study: Water Use Skyrockets as Fracking Expands
The U.S., Brazil and China All Set Major Climate Goals
Water Use Declining as Natural Gas Grows
Supreme Court Blocks EPA Rule on Mercury Emissions