The Philippines has emerged from under the lashing winds and rains of Typhoon Hagupit, now just a tropical depression making its way over the South China Sea. 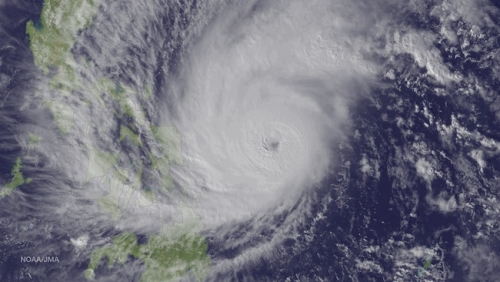 Typhoon Hagupit (known in the Philippines as Ruby) as it bore down on the island nation on Dec. 5, 2014.
Click image to enlarge. Credit: NOAA

While the storm damaged thousands of homes and buildings and caused dozens of deaths, the impact was not nearly as great as the devastation wrought by Super Typhoon Haiyan a year ago. Haiyan slammed into the islands as the strongest ever recorded tropical cyclone to make landfall.

Although Hagupit wasn’t as devastating, it was a whopping fifth storm to reach Category 5 strength (the highest designation on the Saffir-Simpson hurricane scale) in the West Pacific ocean basin this year. That number of top-strength storms has been fueled, in part, by the exceptionally warm waters that have been in place across parts of the Pacific — warmth that, along with that from other ocean basins, is setting 2014 on a track to become the warmest year on record.

Hagupit (known locally as Ruby) made its initial landfall in the Philippines on Saturday as a Category 3 storm with sustained winds estimated at 125 mph, enough to rank as a major hurricane. Earlier in the week, the storm had been a super typhoon, equivalent to a Category 4 or 5 hurricane.

While hurricanes in the Atlantic form during a fairly set 6-month season, the typhoon season of the Western Pacific lasts more or less all year (though activity does tail off in the cold winter months). So seeing such a strong storm in December in this part of the world isn’t unusual, whereas it would be very rare in the Atlantic.

Also rare for the Atlantic would be the five Category 5-strength storms that have spun up in the West Pacific this year, the most in that basin since the 10 seen in 1997, according to Steven Bowen, an associate director and meteorologist with the reinsurance group Aon Benfield. The record for Category 5 storms in a single season in the Atlantic is only four, which has only happened once, during the blockbuster 2005 season. The West Pacific, on the other hand, has averaged about three Category 5 storms a season since 2000, Bowen said.

The five storms this season have still been noteworthy, and one reason there have been so many are the warm waters that have been in place across the Pacific. The waters that allowed Hagupit to rapidly strengthen last week were about 2°F warmer now than this time last year, Bowen said. 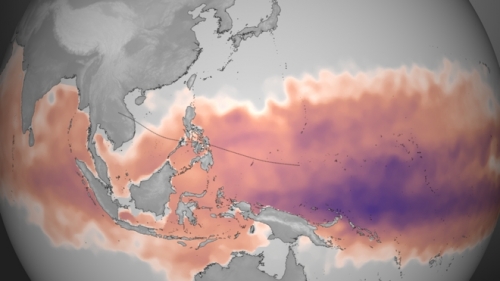 Graphic showing the total amount of heat energy available for Super Typhoon Haiyan to absorb, not just on the surface, but integrated through the water column. Deeper, warmer pools of water are colored purple, though any region colored from pink to purple has sufficient energy to fuel storm intensification. The dotted line represents the best-track and forecast data as of 16:00 UTC on Nov. 7.
Click image to enlarge. Credit: NOAA.

“It’s not completely unusual to have such warm waters at this time of year, as warm SSTs (sea surface temperatures) also led to a Category 5 December super typhoon (Bopha) that made landfall in the Philippines in 2012,” Bowen wrote in an email.

But the warmth this year has been in place in the Pacific Ocean, as well as other ocean basins, all year, setting records in some places.

That warmth was present, but more concentrated, last year, said Kevin Trenberth, a climate researcher at the National Center for Atmospheric Research in Boulder, Colo. This gave Super Typhoon Haiyan a deep well of exceptionally warm waters to pull its strength from. While such a strong storm would typically leave cooler waters in its wake, the deep store of warmth helped replenish the waters at the surface, Trenberth said. This allowed it to ultimately make landfall in the Philippines with sustained winds of 195 mph and gusts of 220 mph.

Since then, and in part because of a developing El Niño “the huge store of warm water has spread out somewhat, and hence the warming over other parts of the Pacific,” Trenberth said.

This led to one good result: Hagupit didn’t have the same deep stores of warm water that Haiyan did, which limited its support.

The spreading of the ocean warmth across the Pacific could have a link to global warming and to a longer-term El Niño-like pattern called the Pacific Decadal Oscillation (PDO). 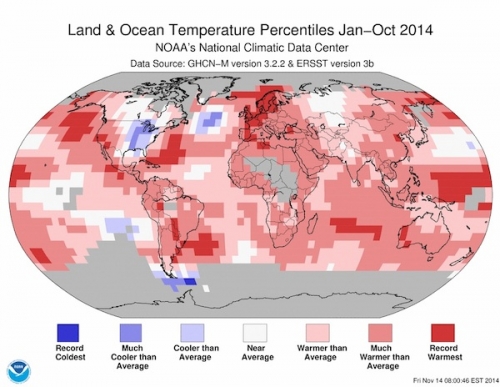 How temperatures across the globe ranked from January through October 2014.
Click image to enlarge. Credit: NOAA

Some have cited this widespread ocean warmth as the beginning of the end of the pause, or hiatus, in the rate of planetary warming, with rates of warming demonstrably slower over the past few decades than in the previous ones. The ocean stores much of the heat absorbed by the excess greenhouse gases in the atmosphere, so it could be beginning of that heat being unleashed back into the atmosphere.

For the year through October, the average ocean temperature for the planet was a record high, according to NOAA data. That was a significant factor in the same period being the warmest first 10 months on record, 1.22°F higher than the 20th century average of 57.4°F. If November and December continue on pace, 2014 could best 2010 as the warmest year on record and would mean that 14 of the 15 warmest years all occurred in the 21st century.

“The change in the PDO and the El Niño certainly mean at least a temporary unpausing in the rise in global mean temperature, but we shall have to see what follows,” Trenberth wrote in an email.

You May Also Like:
Warm Water Invasion Is Fueling Striking Antarctic Ice Melt
WMO Warns Lima Delegates 2014 May Be Hottest Year
Deadly Heat in Europe 10x More Likely Than Decade Ago
NOAA: Climate Change Did Not Cause Calif. Drought