Once Again, A Record-Hot Winter for California

As Yogi Berra famously said, “it’s déjà vu all over again.” While much of the eastern U.S. digs out from yet another snow and ice storm, the West has capped off a decidedly toasty winter. 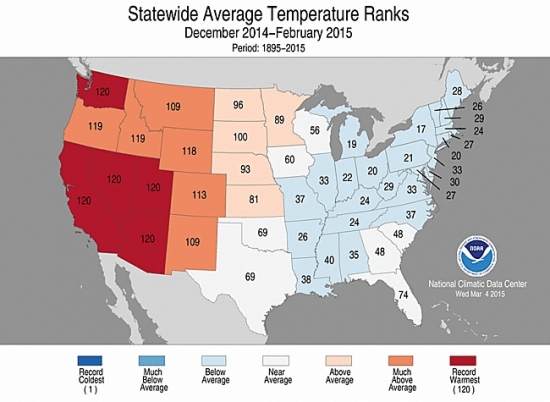 Rankings for average winter temperatures for each state in the Lower 48 for the winter of 2014-2015.
Click image to enlarge. Credit: NOAA NCDC

In fact, California, Utah, Arizona, Nevada, and Washington each saw their hottest winter on record, according to data released Friday by the National Climatic Data Center (NCDC).

For California, this winter eclipsed the previous record set just last year — a symptom of the area of high pressure off the West Coast that has stubbornly stayed in place and kept temperatures elevated. It also serves as a potential sign of how the average temperature for the year may turn out, not welcome news for a state parched and in drought.

From December through January, California recorded an average temperature a solid 1.5°F above last year’s mark. For just the first two months of this year, temperatures are 1°F hotter than last year, which ended as the hottest year on record by nearly 2 degrees.

“The state is already off to a large head start compared to last year,” NCDC climatologist Jake Crouch said in an email. “While it is too early to speculate on whether California will see another record warm year, 2015 is off to an impressive start.”

And if it doesn’t set the record, it will likely still be among the leaders, Mike Anderson, the California state climatologist, said in an email.

That sultry weather certainly doesn’t bode well for the multi-year, firmly entrenched drought that blankets the state. The same high pressure area over the Pacific Ocean that has helped keep temperatures elevated has also largely blocked much-needed storms, keeping the snowpack dismally low and reservoirs below normal. Winter is typically California’s wet season, so with the arrival of March, there is dwindling hope for more moisture before the dry season sets in.

Balmier temperatures also mean more evaporation of what water there is, as well as more water use by residents.

Here are maps depicting the short term and long term precipitation deficit in CA as of March 1st, 2015. #cawx pic.twitter.com/VAjLMXXdPk

Of course, California isn’t the only state suffering from unusually warm weather and drought. Eight states in the West had at least a top 10 warmest winter, including the five that saw their record hottest. Several western cities, including Reno, Nev., Fresno, Calif., Portland, Ore., Sacramento, Calif., Tucson, Ariz., and San Francisco, also had chart-topping winters.

And while the eastern part of the country shivered through much of winter, no state or city had a record cold one. For the country as a whole, daily record highs outpaced record lows by 3-to-2.

While Washington and California had their hottest winter, in a bit of a surprise, Oregon did not. Crouch said that was because of where the anomalous warmth was concentrated. The most abnormally high temperatures were along the coastal areas of Oregon, whereas in previous record-warm winters for Oregon, the heat was in the interior and covered a larger area of the state.

Those interior regions are drier and so they vary more in temperature from year to year. The coastal warmth this year just wasn’t enough to overcome the heat of previous winters. But this winter was only 0.2°F behind the record-holder, which was the winter of 1933-1934.

That minor difference matters little for those dealing with the drought intensified by all that heat.

“Whichever year or winter comes in first or second, it's still been quite remarkable” this winter, Kathie Dello, deputy director of the Oregon Climate Service at Oregon State University, said. “I think this winter has been such a wake-up call — people are realizing that we need to have some really tough conversations about our future and water supply.”

You May Also Like:
Maps Show El Niño Won’t Help the West’s Water Woes
Arctic Sea Ice Is Getting Thinner, Faster
How Did Your City Fare This Winter?
After Much Ado, El Niño Officially Declared