The unprecedented streak of record-hot months that the world has experienced over more than a year just tacked on one more month: Data released Tuesday by the National Oceanic and Atmospheric Administration showed last month was easily the hottest August on record.

That makes 16 straight record-hot months, unparalleled in NOAA’s 137 years of record-keeping. The previous record streak was only 10 months, set in 1944. NASA’s data, released earlier, also said August was record hot, not to mention tying for the hottest month the planet has ever recorded. 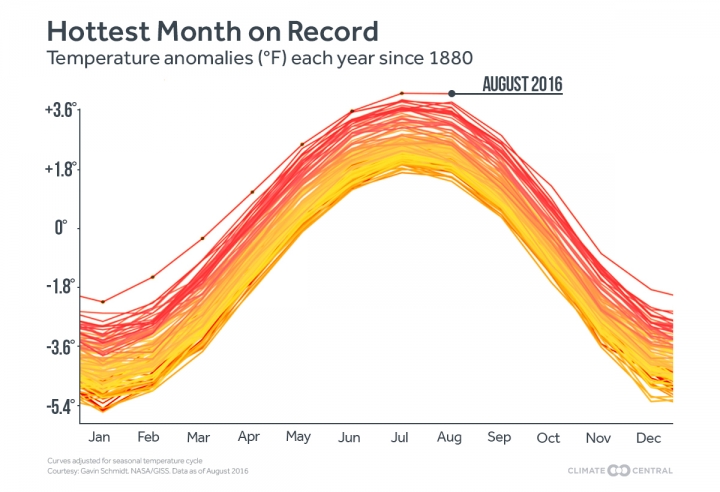 The record-hot months of 2016 clearly stand out against the past 137 years.
Click image to enlarge.

Though there are still several months left in the year, it is a virtual certainty that 2016 will be the hottest year on record, and by a significant margin. While global temperatures can fluctuate from year to year, 2016 is serving as something of an exclamation point for the long-term trend of warming driven by the buildup of heat-trapping gases in the atmosphere.

While an El Niño event helped boost temperatures at the end of last year and over the first half of this year, it is predominantly the excess heat trapped by greenhouse gases that is sending those temperatures ever skyward. 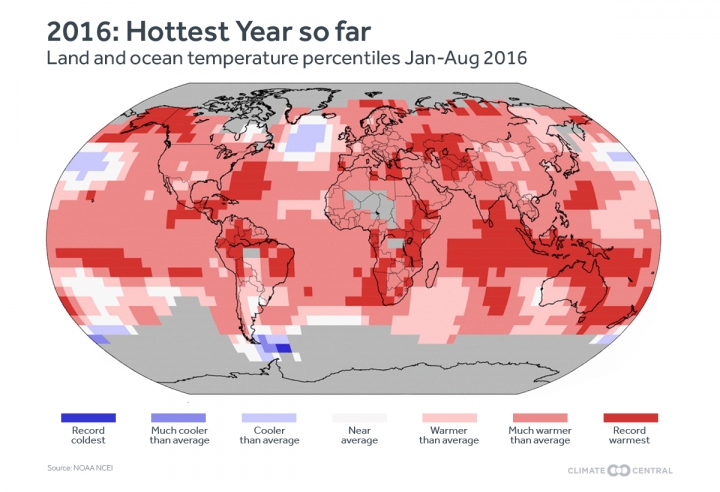 How temperatures around the globe have differed from the 20th century average through August.
Click image to enlarge. Credit: NOAA

It is this long-term trend that climate scientists prefer to emphasize over any particular monthly or yearly record. This year’s soaring temperatures have inspired some scientists and others to try to put the current climate into context, to show just how far the planet has heated up.

Ed Hawkins, a climate scientist at the University of Reading in the United Kingdom, made the metaphorical upward spiral of temperatures into a literal one, and the animation went viral on social media. Hawkins also assembled a series of 167 tiny world maps, each showing how temperatures have changed since the 1850s — the maps progress from cool blues early on to a mass of angry reds in recent decades.

Randall Munroe, author of the webcomic xkcd, created a scrollable timeline of temperature change over the past 20,000 years, annotated with key events in human and natural history. That comic became another viral hit. 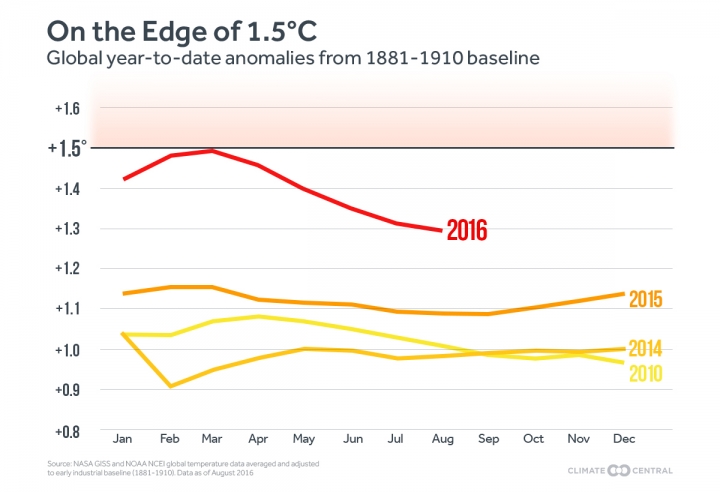 The increased attention to the feverish levels of Earth’s temperature has come as the world’s nations have agreed to limit warming by the end of the century to less than 2°C above temperatures before the Industrial Revolution unleashed a torrent of greenhouse gases. Some countries are pushing to limit that warming even more, to 1.5°C.

Because NASA and NOAA don’t compare current temperatures to a preindustrial baseline, Climate Central has been reanalyzing the data each month. The numbers from each agency are averaged and then compared to that from 1881-1910. August 2016 measured 2.32°F (1.29°C) above the average from that period.

With the waning of El Niño’s influence on temperatures, monthly temperature departures (or the amount each month is higher or lower than the average), are expected to decline as the year goes on. Perhaps as early as September, the string of record-setting months will cease.

But 2016 is so far above the pack that it is all but guaranteed it will displace 2015 as the hottest year on record.