Over the first decade of this century, record high daily temperatures in the U.S. were registered twice as often as record lows, a clear sign of global warming. If emissions of heat-trapping greenhouse gases continue on their current track, that ratio could become even more skewed, potentially reaching 15-to-1 by midcentury, a new study finds. 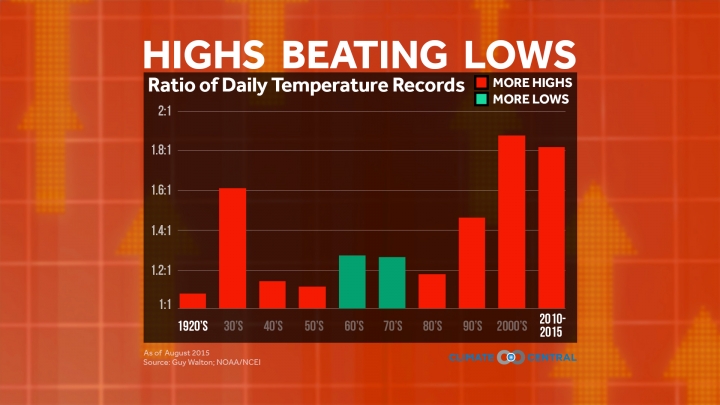 The research, detailed Monday in the journal Proceedings of the National Academy of Sciences, lays bare how even seemingly small increases in average temperatures can make a big difference to the extreme weather that people experience.

“You can actually see it through these record highs and lows. And we’re already seeing it,” study co-author Gerald Meehl, a senior scientist at the National Center for Atmospheric Research in Boulder, Colo., said.

Extreme heat poses significant risks to human health, particularly to vulnerable populations like the elderly. It can also damage agriculture and push rain-starved areas into drought.

In a world without human-caused warming, record lows would be expected to occur roughly as often as record highs over the long run, even if the ratio varies from year-to-year. But as Earth’s baseline temperature continues to rise, it increasingly shifts the odds in favor of record heat and away from record cold.

In a 2009 study, Meehl and his colleagues showed that this shift started happening in the late 1970s and that the ratio of record highs to lows had reached 2-to-1 over the first decade of this century. (So far this year, the ratio is 6-to-1, and the U.S. is on pace for its second-hottest year on record.)

In particular, overnight lows have been hitting record high levels.

“That’s where most of the action has been happening in this ratio,” Meehl said. “It just doesn’t get as cold at night as it used to.”

They noticed, however, that climate models were overestimating the ratio slightly compared to observed temperatures. In the new study, they dug into why that might be, and found that models tended to underestimate precipitation and resulting evaporation, which tends to have a cooling effect. 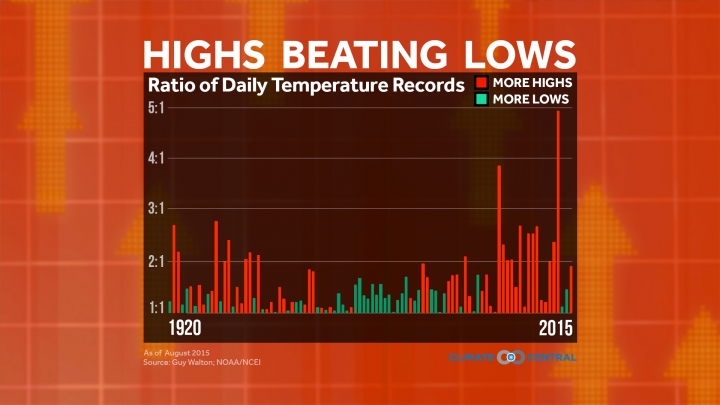 Meehl and co-authors Claudia Tebaldi, also of NCAR, and Dennis Adams-Smith, who was a Climate Central data analyst during the study, wanted to find a more straightforward way to estimate the future increase in the high-to-low ratio. To do that, they established the relationship between that ratio and the increase in average temperature over the contiguous U.S. (versus linking it to a particular emissions scenario) and extrapolated it out into the future.

While a rise in average temperatures seems abstract, such a shift in extreme heat compared to extreme cold is “something people can at least get their head around,” Meehl said.

Even with a major shift toward extreme heat, cold records will still occasionally be set, because, as Meehl said, winter will still happen. They will just become fewer and further between.