The U.S. is Poised to Set a Record-Setting Record

California's biblical deluge has occupied many a meteorologists’ mind this February. But another notable story is unfolding across the eastern U.S.

Unseasonable warmth has kickstarted spring up to a month early in the Southeast, cut into already paltry Great Lakes ice cover and created skiing conditions more reminiscent of April in the Northeast. But the most outstanding aspect of the persistent February warmth is what it has done to the ratio of record highs to record lows. 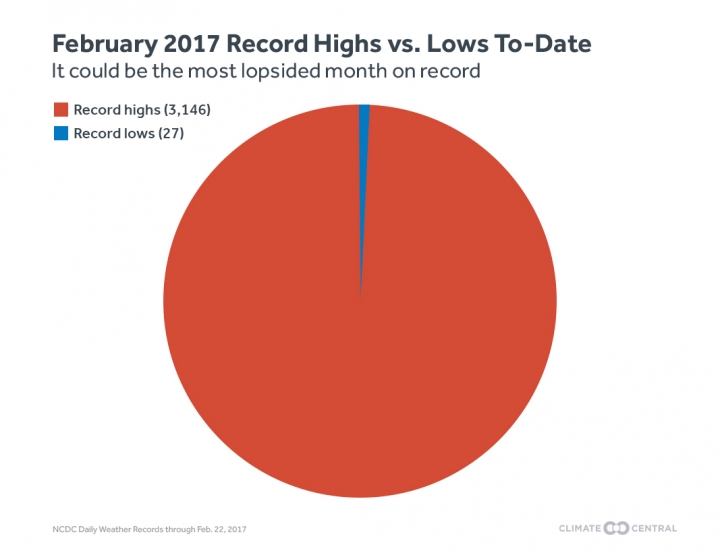 Record highs are outpacing record lows in February 2017 at a record-setting pace.

“If the eventual ratio is above 50-to-1 this would be historic,” Guy Walton, a meteorologist who tracks record temperatures, said.

The increasing ratio of record highs vs. record lows is one of the hallmarks of climate change. By raising the baseline temperature, climate change has made it more likely for record highs to be set while decreasing the odds of record lows. In a world that wasn’t warming, that ratio would remain constant right around 1-to-1, but research has shown that hasn’t been the case with highs outpacing lows more and more with each passing decade.

The trend is expected to continue into the future. By mid-century, the ratio could be as high as 15-to-1 in any given year unless carbon pollution is curtailed.

There has been a huge geographical spread of warm and downright hot weather stretching across the U.S. The latest bout of warm weather has seen Milwaukee reach 71°F, Madison hit 68°F and Green Bay crack 65°F on Wednesday. All are February records and about 30°F above normal for this time of year.

Galveston, Texas also set a daily record on Thursday at 76°F, the seventh time that’s happened this month. Memphis airport set a record topping out at 76°F, and well, the list goes on.

For those of you scoring at home, here are the dates of records per the NWS Galveston data (https://t.co/cnnHCg0VbV). I've added today's pic.twitter.com/y2Z5VPv3a0

The warmth hasn’t just broken records. It has been long lasting, too. Atlanta has cracked 70°F four times in the past week and has now had more 70°F days in 2017 than any other year-to-date. Dallas has set a similar record for the most 80°F days, according to Capital Weather Gang.

Miami has had 54 days above 80°F while also failing to dip below 50°F this winter. Both are record-setting marks, according to Brian McNoldy, a climate researcher at the University of Miami.

More daily records are in danger of falling across the Northeast for the latter half of the week as warm weather continues its march across the country. On the Texas-Mexico border, it’s possible temperatures could crack 100°F on Thursday.

This year’s freakish February numbers only tell part of the story. The warm weather has acted like a time machine, turning the clock more than a month forward in places.

In the Southeast, locations are seeing spring arrive up to four weeks early, according to the U.S. National Phenology Network spring leaf index. Spring coming earlier is another hallmark of climate change.

“I can only say how things are shaping up so far, but so far, it’s shockingly early,” Theresa Crimmins, the assistant director of the network, said. “Eastern redbuds have been reported with open flowers in mid-February this year in North Carolina. In the previous three years, they haven’t been reported to have open flowers until March or April. I could go on and on. There are lots of reports of remarkably early phenology flooding in. The signature of the really early spring that we see in the spring index is definitely driven by temperature.”

The advancement of spring as of Feb. 1 compared to Feb. 22.
Credit: U.S. National Phenology Network

The winter warmth in the Southeast is directly linked with the storms rolling through California.

“This year the circulations and storm tracks that are cruising straight across the Pacific to Northern California are part of a pattern that is also shielding the Southeast from the kinds of cold air intrusions from higher latitudes that it gets in a more normal winter,” Scripps Institution of Oceanography climate researcher Michael Dettinger said while noting it's a marked shift compared to the winters of 2014 and 2015.

In those years, a looping trajectory of the jet stream helped steer storms north of California while allowing frigid air to spill into the eastern half of the country.

Early spring — or at least waning winter — is also afoot in the Upper Midwest. Flowers are sprouting in Chicago as temperatures cracked 70°F twice this week. Further north, mild weather has sped up mid-winter traditions.

“Maple sap is running fast and at least one month earlier than usual” in Minnesota’s arrowhead region, according to Kjersti Vick, an employee at Cook County Visitors Bureau.

The Great Lakes themselves are also feeling the effects of mild weather this winter. Ice cover sits at just 8.3 percent as of Thursday. That’s well below the average of around 52 percent for this time of year.

Ice cover peaked earlier this month at only 15.3 percent. While it’s possible it could spread out across the lakes again, that mark currently ranks as the fourth lowest Great Lakes ice peak on record.

In a reminder that winter isn’t over, parts of the Midwest will deal with weather whiplash to end the week. A snowstorm could drop as much as 18 inches of snow and bring blizzard conditions to Nebraska, South Dakota, Iowa and southern Minnesota.

The snow is a blip on the long-term forecast, though. The latest Climate Prediction Center forecast shows that spring is likely to be warmer than normal and that could keep warm weather records falling.

Andrea Thompson contributed to this article.

You May Also Like:
Senate Mulls ‘Kill Switch’ for Obama Methane Rule
This is What 4 Million Solar Panels Look Like From Space
Scientists Got a New Look at the Growing Larsen C Crack
California Farmers Use Floodwater to Replenish Aquifers